Race Wins for Benik Kart Across the Country 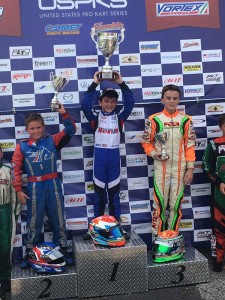 Showing speed and garnering wins and podiums at several of North America’s premier karting series, BENIK Kart continued their winning ways only a few short weeks ago at the second event weekend of the United States Pro Kart Series (USPKS). With drivers competing in both the Yamaha 100 Cadet and Mini Rok 60 Cadet, it was Lachlan DeFrancesco that would lead the team to victory standing atop the podium yet again in 2014.

“It was a great weekend for the team,” explained Nick Mitchell, Co-Founder of BENIK Kart. “To add another victory in another series shows the true diversity of our program.”

After qualifying seventh for Sunday’s wheel-to-wheel competition, DeFrancesco would claim the fifth position in heat one before engine trouble in the second and final heat race would see him finish just outside the top-ten in 11th. Determined to provide Team BENIK with a victory, DeFrancesco drove his Supertune USA powered kart to the front of the field to take a demanding victory, his first in USPKS competition.

Joining DeFrancesco in the top-ten was fellow BENIK Kart teammate Lance Fenderson. After coming home seventh in Saturday’s main event, Fenderson drove his BENIK Kart to a top-five result on Sunday with a fifth place finish. Also seeing action in the Yamaha 100 Cadet division, Fenderson managed to add a sixth place result in the class on Sunday as well.

A week prior to the USPKS event, BENIK Kart newcomer Chase Heffner would score the Micro Rok victory at the new Rok Cup USA program. Taking place at the 103rd Street Motorsports Complex, Heffner stole the show and topped the blocks taking the race win.

BENIK Kart and their talented squad of drivers will now shift their focus to the Rotax program as they prepare for the upcoming Coldstone US Grand Nationals. Taking place at the Miller Motorsports Park in Tooele, Utah, the team will enter a host of competitors in the event in the search for race wins and to be named national champions for their respected divisions.

For more information on BENIK Kart, please contact Nick Mitchell or Ben Cruttenden via e-mail to Info@Benik-Kart.com or by phone at 754.206.4870. BENIK Kart can also be found online at www.Benik-Kart.com or on Facebook at www.facebook.com/BenikKart and Twitter at @kartBENIK.