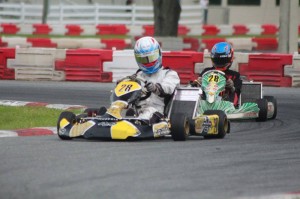 AJ Myers has scored victories in several series in 2014 and most recently topped the blocks at the United States Pro Kart Series (Photo: Performance Motorsports)

After an up and down Florida Winter Tour (FWT), AJ Myers has come into his own in 2014 competing and scoring race wins at the Rok Cup USA and United States Pro Kart Series (USPKS) programs. Growing and maturing as both a driver and an adult, Myers has also started his own business venture, Performance Motorsports, to provide driver coaching and equipment preparation for upcoming national and regional level events.

After the up and down Florida Winter Tour that saw Myers claim two podium results including a race win in the TaG Senior division at the third and fourth rounds of the series, the talented PCR driver would set his sights on the Rok Cup USA series where he would compete in the Rok Shifter division. After a disastrous opening round at the Orlando Kart Center that saw several mechanical DNFs, Myers did show the speed to run at the front of the field by setting a new track record over the event weekend.

Rounds two and three at Homestead Karting in Homestead, Florida and the 103rd Street Motorsports Complex in Jacksonville, Florida would see Myers start a string of strong results. Claiming the pole position, all three heat race and prefinal wins, as well as the main event victory where he was nearly seven tenths faster than the next quickest kart, Myers dominated the second round of the series. Looking to carry the momentum into round three, Myers would claim the pole position and one heat race win on Saturday before dominating the prefinal and main event Sunday to add another victory to his resume and take over the series point lead.

Showing his speed at several series, Myers would narrowly miss the victory at the Florida Pro Kart Series division in the shifter kart class after taking the prefinal win but coming home second in the day’s main event.

Heading north to the MRP of South Bend facility for USPKS action, Myers would have a Saturday to forget. After failing to finish each and every on track session due to incidents that were no fault of his own, Sunday would be a memorable one for the PCR and Checkered Motorsports driver. After claiming the pole position and race win in heat one, Myers would fall to third in heat two, as they would change setups to accommodate changing track conditions. Determined in the day’s main event, Myers drove away from the field to score his first career USPKS victory.

Not only has AJ Myers been racing and winning across the country, the young gun has started his own driver coaching and kart preparation program with his father Mike Myers, named Performance Motorsports. Working with several drivers and having great success, Myers will work the Cold Stone US Grand Nationals with Rotax Micro Max driver Tyler Maxson as they hunt for the Micro Max national championship. Performance Motorsports will also offer race preparation, track side tuning and arrive and drive programs next to their driver coaching program as they look to break into the karting market with a variety of different options.

“I would like to thank PCR Kart and Checkered Motorsports for their help, support and continued success in 2014,” explained Myers. “Without them, I would not be able to do what I have done in 2014.”

For more information on AJ Myers racing program and services offered by Performance Motorsports, please contact Mike Myers at 727.647.8870 or via e-mail to realrace5@gmail.com