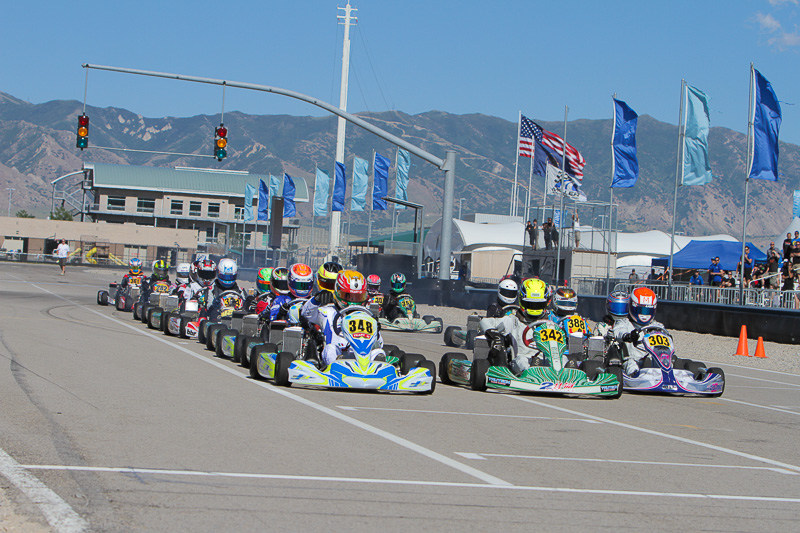 A fantastic weekend of racing at the Rotax Summer Shootout as drivers prepare for the upcoming Cold Stone US Grand Nationals (Photo: Studio52.us)

Over 120 drivers contested the 2014 Rotax Summer Shootout this past weekend (June 27-29) to prepare for this year’s Cold Stone United States Rotax Max Grand Nationals. at the pristine Miller Motorsports Park in Tooele, Utah. This year’s Summer Shootout provided fantastic racing, and a great opportunity for racers and teams to prepare for the Grand Nationals coming up July 17-20. The first class facilities at MMP, along with their staff’s unmatched hospitality made the weekend more than enjoyable for all of the teams and drivers who came out to play. Two days of racing were ran in beautiful weather and underneath clear blue skies both days. 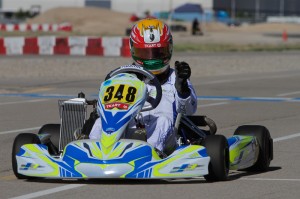 If the Summer Shootout was an indicator of what is to come in two weeks, the Grand Nationals are going to be an event unlike any other, with some of the best racing you will see all year. The highlight of the weekend was the $3,500 purse for the podium finishers on Sunday in the Senior Max category, with Luke Selliken taking home top honors.

Senior Max boasted a field of nearly 30 karts both days in Tooele. The Senior Max driver talent pool was deep as always, as plenty of the best from across the country and North America showed up to prepare for the Grand Nationals. Saturday belonged to Alessandro Bressan as the Italian driver swept the first day of competition from qualifying to the main event. Bressan began the day by edging out Luke Selliken for the pole position in qualifying by a slim two hundredths of a second. Bressan led each of the races 16 laps and drove away to the Prefinal win. Behind him though the competition was great. Rolison Performance Group’s Selliken was engaged in a battle for second with Jake Craig, with Craig earning the spot in the end and Mason Marotta crossed the line in third. Marotta presented himself as the first real challenger of Bressan all day. Marotta used his inside row two starting spot to take over the lead in turn one. Marotta led the first three circuits before Bressan reclaimed the lead. Marotta settled into second while still keeping Bressan honest. The checkers flew on Bressan’s perfect day as he won the Senior Max final by one second over Marotta with Selliken in third. Florida driver Dan Roeper was fourth with Arizona pilot Jim McKinney in fifth. 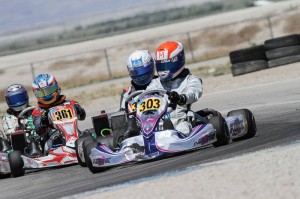 Marotta stepped up to the plate to open up Sunday’s big day of racing with $3,500 on the line. The California driver grabbed the pole position in qualifying with Thomas Issa edging out his teammate Bressan for second. Bressan cleared Issa to start the Prefinal but would not have anything for Marotta as he drove to the Prefinal win while Craig advanced from fifth to third. The start of the main event saw the field shuffled up with Selliken emerging as the leader and out to a big lead while Bressan dropped to seventh in the order. Marotta would also fall down the order until he was forced to retire on lap nine. Bressan eventually worked his way up into the second position, but Selliken established a large enough lead and held off the Italian-native to secure the $2,000 pay day with the victory. Bressan earned a hard-fought runner-up check for $1,000, while Canadian Bryce Choquer stood on the podium in third with a check for $500, making it a true international podium. Jamaican Thomas Issa was fourth with McKinney earning another solid fifth place result.

The largest class of the weekend was Junior Max with 30 drivers. Each of the weekend’s two race days featured different leaders, plenty of lead changes and five to six drivers that were in contention for the victory. Saturday started with Sting Ray Robb grabbing the pole position in the 12-minute timed session. Robb edged out Texan Nick Brueckner for the top spot, while Utah native Austin Versteeg, Trenton Estep and former Mini and Micro Max Grand National champion Anthony Gangi Jr. completed the fast five. Gangi made the most of his inside row three starting spot in the Prefinal as he jumped to the lead on lap one and drove on to the win. Brueckner would hang tight in second place as Robb fell to fourth behind Estep. Gangi got away to a good start to begin the Final, but was stalked constantly by Brueckner. The MRP Motorsport/Birel America driver made several attempts for the lead, and finally got by for the position as they began the 10th lap. Brueckner’s time at the front was short-lived though as Gangi took the spot back and drove to the victory. Brueckner settled for second with Versteeg completing the podium. Robb finished off the day in fourth with Estep ending up fifth. 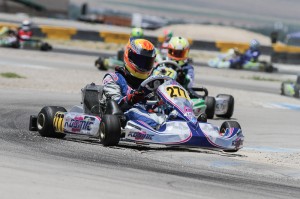 Building on his strong run from Saturday, Versteeg laid down a flyer in qualifying that grabbed him the pole position. Saturday winner Gangi stayed near the front as he posted the second fastest lap. Versteeg, the Rotax Challenge of the Americas 2014 champion, got out to an early lead in the Prefinal and drove to the largest margin of victory in the class all weekend, nearly three seconds ahead of Luis Jose Forteza. Gangi had run in second most of the race but fell to second to the charging Forteza who started fourth. A five-kart pack formed to begin the main event with the group running nose to tail nearly the entire race. Leading early was Gangi until Brueckner took his turn with an aggressive move on the entry of turn four. Gangi fell victim to side-by-side contact, dropping to fifth at the tail of the group. Brueckner led the next four laps until Versteeg took over the top spot. The Rolison Performance Group driver would pace the group the remainder of the race to the checkered flag. Brueckner crossed the line second, but was penalized two positions, promoting Gangi to second and former Mini Max Grand Nationals champ Christian Books completing the podium. Robb was fifth in the order behind Brueckner.

Racing in the Micro Max class at Miller was some of the best each day. The first of the two race days was dominated by Jak Crawford. The Texas driver who won all six of the Rotax Challenge of the Americas feature races this year started his run to the top by grabbing the pole in qualifying after outrunning Tyler Maxson. The Nash Motorsportz driver held off challenges from Reece Gold and Maxson in the Prefinal to the checkered flag. A new challenger stepped forward in the main event as Arizona’s Diego LaRoque harassed Crawford throughout the 14-lap race. The race came down to a photo finish with Crawford edging out LaRoque by just 23 thousandths of a second, while Gold completed the podium. Sunday looked to be LaRoque’s day as Diego started off as the top qualifier over Crawford. He kept the top position through the Prefinal as Chase Heffner and Josh Pierson moved into the battle. Crawford fought his way back to the front in the Final, taking the top spot away from on lap four, bringing Koene USA’s Ugo Ugochukwu with him. The top two ran nose to tail until the final circuit with Ugochukwu working past Crawford at the line, earning the victory by just six hundredths of a second. LaRoque recovered to complete the podium. 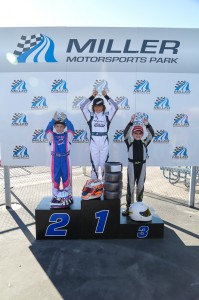 Tyler Brooks swept the weekend’s main events in Masters Max, putting him as one of the favorites in the category for the Grand Nationals. Joey McGuire was the top qualifier on Saturday, only to see last year’s Grand Nationals runner-up and KartSport North America pilot Scott Falcone taking the Prefinal win. Falcone, who arrived late to Utah from his Colorado home, came from 12th on the starting grid to the lead in 10 laps. Falcone was solid in the Final, leading the entire race to reach the checkered flag first, only to be assessed a three-position penalty during post-race inspection for a carburetor issue. That promoted Brooks to the top step of the podium, with Utah drivers Ken Maxfield and Justin Peck filling out the podium. Brooks stepped up his game on Sunday and dominated. The California driver was the class of the field as he won the pole position, Prefinal, and drove to an impressive -ive second win ahead of Falcone with Maxfield in third.

Nearly 30 very talented young drivers filled out the grid in the Mini Max class this past weekend in Utah. The racing in the Mini Max class featured large packs of karts running nose to tail with a host of drivers eligible for the win each day. 2013 Micro Max Grand Nationals champion Dylan Tavella began Saturday as the top qualifier, beating local racer Payton Durrant for the fast time in qualifying. The Prefinal saw Lachlan DeFrancesco lead nearly the entire race until Kaylen Frederick took over the lead, and the win on the final lap. The main event began with Enzo Fittipaldi taking a turn at the front, before DeFrancesco reclaimed the spot during the middle portion of the race. With five laps to go, Fittipaldi took back the lead and outlasted Frederick and Tavella for the victory. Riley Dickinson and Koene USA’s Michael d’Orlando finished fourth and fifth. Sunday was Tavella’s turn to stand on the top step. The 2014 Rotax Challenge of the Americas champion and Durrant were the top two once again in qualifying. Tavella led the first half of the Prefinal, while Tyler Gonzalez came from third place to steal the lead with three laps to go. On the final lap, Frederick was able to stalk and surpass Gonzalez for the win. Frederick paced the field to begin the Final, only to see Tavella triumph and secure the victory. Durrant and Frederick completed the podium with d’Orlando and Fittipaldi making up the top-five. 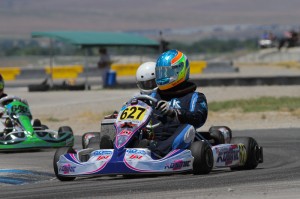 Alessandro Bressan ran double duty throughout the weekend, and drove to a perfect score in the DD2 category. Bressan was the top driver each and every session aboard his J3 Competition entry while Michael Ilavia and Sabre Cook chased him throughout the weekend. Saturday, Bressan won the Final with Ilavia in second and Cook in third. Bressan was again unstoppable on Sunday while CRG-USA’s Cook and Ilavia switched positions on the podium. Erik Jackson ran uncontested on Saturday in DD2 Masters, before flying home to California to compete in a race with his home series.

Many, if not all of the competitors on the weekend will return to the Miller Motorsports Park for the 2014 Cold Stone US Grand Nationals. The United States Rotax Max Challenge will crown this year’s seven national champions, and award nine tickets to drivers to be part of the 2014 Team USA for this year’s Rotax Grand Finals, scheduled for November 25-29 in Valencia, Spain. eKartingNews.com will have complete coverage from Tooele, beginning with a preview series leading up to the event and begins trackside on the final day of practice.