Two Podiums for JHM at Goodland 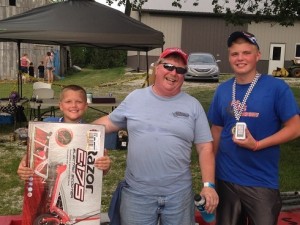 Peavler, 15, led the way for the Columbus (IN)-based team, taking the runner-up spot in the 16-lap Junior 2 (Supercan) feature through the streets of the northern Indiana town. The Orestes (IN) youth started third in his JHM / Max Powder Coating #62 Birel, then moved up a spot on the next lap and stayed there for the remainder of the race.

Justin Laudick challenged Peavler early but Peavler’s steady laps allowed him to pull away to secure his spot. In the end, his feature lap times on the eight-turn, 0.69-mile long street course were his best of the weekend by nearly a second. Simpsonville, Kentucky’s Ben Loveall won the event.

In Junior 1 (Sportsman) action, Fox battled with Makala Marks for the runner-up spot for the entire race. The two swapped the spot back and forth until the 10-year-old New Ross (IN) youth fell short by a tenth of a second at the checkered flag. It was Fox’s first loss in the event as he had won all five of his previous outings here. Kaden Wharf took the win after capturing the heat race as well.

Fox’s cause was not aided by a bent rear sprocket the team found after the race. The defective gear caused the chain to tighten up, binding the engine and almost certainly costing his #62 mount some speed.

“I can’t be happier today,” team owner Jim Howe said later. “We had worked with Bransten all week on his turn entries and exits. And he did everything we told him to drive a strong race. Eli drove his heart out in Junior 1 and we just didn’t give him the kart he deserved for his efforts.”

SIRA now goes on summer vacation with the next street race set for Aug. 2-3 with the “Diamond Lake Grand Prix” at the Diamond Lake Resort and Campground in Owensboro, KY. The JHM team returns to action July 12 at the historic Whiteland (IN) Raceway Park.