100 drivers battle for near $5,000 purse at third annual event at CalSpeed Karting Center 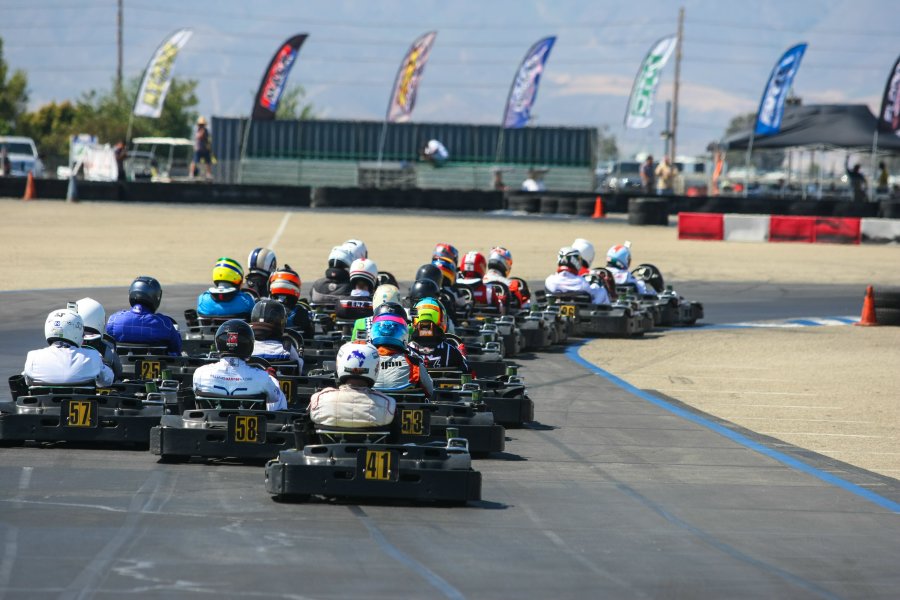 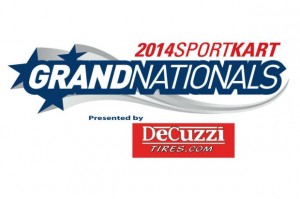 Competition karting has the SKUSA SuperNats, and names like Abasse, Lammers, and Fore. Arrive and drive, or as it is known now as Sport Karting, has the Sport Kart Grand Nationals, and names like Kimbrell, Calvin, and Downs. Just as competitive and serious as its older and faster cousin, Sport Karting has emerged as the perfect avenue for people that still want to have an intense racing atmosphere, without the need to own, or wrench on their own equipment. The third annual event proved to be one of the most fun and exciting weekends in racing, and one that not be soon forgotten.

The Sport Kart USA Sport Kart Grand Nationals presented by Decuzzi Tires is a five-day racing event that starts with a pair of practice days, and continues with three days of racing. Each day of racing utilizes a different track configuration and drivers race four rounds of heats each day, and a semi-final. At the end of the weekend, a driver’s best 9 out of 10 rounds count towards their overall point total, and a Sport Kart National Champion is crowned. Sub championships included a Masters Champion for the driver 40+ years old and a Team Champion for teams of three. 95 drivers took to CalSpeed Karting Center in Fontana, California for the 2014 event. 20 different states and seven countries were represented, but it was So-Cal driver Aaron Downs coming away with the overall victory and the $2000 check. North Carolina driver Fred Ogrim won the Masters title, and Team SPV/K1 Speed brought home the Team prize.

Day one would see a total of 16 races on course, with each driver racing in four 12-lap heats. When it was in the books, former National Champ Jon Kimbrell led the way via two wins, a second, and a third. Joining him at the end of day interview table was his stepbrother Aaron Downs (three seconds and a third), and Fred Ogrim (win, two seconds, and a fourth), who was also the Masters leader at the time. 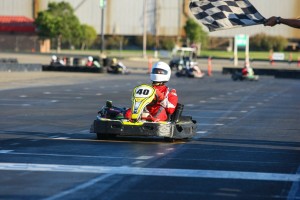 Day two saw an unprecedented performance from Downs, as he swept the day, scoring wins in all four of his races, and atop the points after a tie breaker with brother Kimbrell, who scored a pair of wins and a pair of seconds in his four races. All the way from the UK was third place runner Sean Brierley, putting in his career best performance at the Grands with a win and two seconds to go along with his win, second, and pair of fifth’s from the previous day. Fred Ogrim also maintained the top spot in the masters division after scoring his second win and fifth top three finish of the weekend.

This set the stage for the final day, which included a semi-final run for each driver, which would be everyone’s last chance to score enough points to either transfer directly to the Super Final, or have to go through the Last Chance Qualifier. Wins in the Semi Finals by Kirk Feldkamp and Christopher Huerta helped bolster their chances by earning LCQ berths, while 2012 Grands winner Logan Calvin inched closer to the podium with a win of his own. The real drama however was in the last Semi-Final of the day, with both Downs and Kimbrell seeded in the same race. Kimbrell scored the pole over Downs as they locked out the front row. Once the green dropped however, things took a turn for elder brother, as he fought with a stuck throttle during the 30-lap challenge. In the end, he held on to a fifth place finish, but his brother, and only rival in the championship Aaron Downs scored his record fifth win of the weekend.

With the semi finals in the books, the points were tallied, the drops taken into account, and the grid for the LCQ was set to see what five drivers would join the top twenty in the Super Final. Arguably the most exciting race of the weekend, the field of 25 battled all throughout the 12-lap run, clawing tooth and nail to reach, and stay inside the top five. Starting from pole via his 21st place in the standings, Chris Huerta went on to score his second, and perhaps most important win of the weekend, joined by Colombian Andres Prieto, 13 year old Henry Morse, Michael Weddell from Scotland, and Tony Severson from Texas coming up from 18th to steal the final transfer spot on the last lap.

This set the final grid of 25 drivers for the 50-lap Super Final, preceded by Super Pole qualifying.  All eyes would be on Jon Kimbrell as he had to score the Super Pole bonus points to have a shot at the championship, but when green/white/checkered qualifying finished, so did the title fight, as he was not in the top 6. Ironically though, two of the Super Pole drivers would be transfers from the LCQ, including Preito and Morse, with Morse scoring the Super Pole win by seven one-thousandths.

As the field rolled out for the final race of the championship, the Overall Championship was decided, but the fight for the final spots on the podium, as well as the Masters championship and Team championships were still up for grabs. At the front was an exciting battle that in the end dictated who would finish on the five-man podium, with each pass affecting the order. At one time, Logan Calvin gave back an illegal move to keep from being penalized, which was later joked to be a $300 pass, as it change his position from third to fifth overall. Further back, Fred Ogrim put forth a top ten run to secure the Master’s title, while fellow Masters driver Diego Morales put in a stellar drive to climb up from 15th to second, and steal away the second spot in class from David Kelmenson. In the end, it was Andres Preito who put on a clinic, backing up his speed in qualifying, scoring the Super Final win, and with it a huge jump up in the final standings.

On the final podium would be 2014 Sport Karting National Champion Aaron Downs, followed by step brother Jon Kimbrell, UK’s Sean Brierley, Nor Cal driver Jerott King, and Logan Calvin. In the Master’s division, Fred Ogrim would score the win in his first year of eligibility, with Diego Morales and David Kelmenson finishing out the top three. In the Team Championship, the SPV organization won for the third year in a row, albeit with a different lineup, as Jon Kimbrell, Logan Calvin, and Diego Morales walked away with two sets of hardware.

Along with the silver podium trophy cups, the top five walked away with $2000 for first, followed by $1000, $750, $550, and $450 for the final step on the podium. Special thanks to all of our event sponsors and partners, including Decuzzi Tires,  K1 Race Gear, Random Manufacturing, Courtyard Marriott, Go Racing Magazine, GranStand Sim Racing Products, UBER, Lucas Oil, and Lazy Dog Restaurants.