The Mazda Road to Indy – the most successful driver development program in the world – is now further engrained in the grassroots level of the sport following today’s announcement that Andersen Promotions has formed a partnership with MAXSpeed Group, the United States distributor of the Rotax MAX engine platform. The nationwide professional karting series – with 21 Rotax MAX Challenge (RMC) divisions throughout the country – will become an Official Partner of the Mazda Road to Indy effective immediately to foster the next wave of up-and-coming drivers.

Rotax is the largest racing series in the world in any form of motorsports with over 15,000 drivers competing each year. The United States program entered a new era at the beginning of 2011 when MAXSpeed Group took over the administration, led by President Richard Boisclair. Continued growth and the largest Rotax MAX Challenge Grand Finals in history with 288 of the world’s best karters representing 60 nations descending on NOLA Motorsports Park last year are just a few of MAXSpeed Group’s accomplishments.

“The level of enthusiasm for this partnership from Richard [Boisclair] and everyone at MAXSpeed is just tremendous,” said Dan Andersen, Owner and CEO of Andersen Promotions. “There is a lot of synergy between our organizations as promoters including our goals of providing drivers with the best training and opportunities to advance. Our USF2000 points leader RC Enerson is a former Rotax driver. This new alliance further underscores the natural progression of advancing from karts to cars via the Mazda Road to Indy platform, and we look forward to forming similar relationships with other series around the world.” 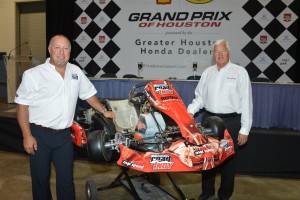 Under the new partnership, RMC will be clearly defined as a path to the Mazda Road to Indy and, as an introduction to the first step on the ladder system, Andersen Promotions will award four one-day tests in the Cooper Tires USF2000 Championship Powered by Mazda during off-season testing to rising Rotax drivers chosen by a panel of experts.

The Mazda Road to Indy and MAZDASPEED scholarships on offer to its champions will be prominently featured at three major Rotax events – the Cold Stone US Grand Nationals at Miller Motorsports Park in Utah on July 17-20, which will include the debut of the Mazda Road to Indy Hard Charger Award in each of the Rotax program’s seven classes, the Pan American Challenge at the GoPro Motorplex in Mooresville, N.C. on October 15-19, and at the series’ crown jewel – the Rotax MAX Challenge Grand Finals in Valencia, Spain, on November 25-29.

“We are very happy and excited to have inked a partnership with the Mazda Road to Indy program,” said Boisclair. “Its success in motorsports and the ladder that has been established from entry level motorsports to the Verizon IndyCar Series is rivaled by no other and we look forward to being an official pathway for drivers to advance onto the first step in USF2000. Working with Andersen Promotions, Dan Andersen and Michelle Kish has been nothing short of exceptional as their excitement and enthusiasm towards motorsports, karting and the Mazda Road to Indy program is second to none.”

As part of the alliance, an educational video detailing the process of how to become involved in racing, beginning with karting and advancing through the Mazda Road to Indy, will be produced by the Victory Group – creators of RoadToIndy.TV – and will feature current Verizon IndyCar Series and ladder series drivers with Rotax MAX experience such as James Hinchcliffe, Sage Karam, Gabby Chaves and Garett Grist amongst others. In addition, both the RMC and Mazda Road to Indy websites – USF2000 as well as the Pro Mazda Championship Presented by Cooper Tires and Indy Lights Presented by Cooper Tires – and social media platforms will carry news and information on each series.

Today’s press announcement held at the Shell and Pennzoil Grand Prix of Houston also included the display of a Mazda Road to Indy-liveried kart, which will be featured in each race at the Grand Nationals.