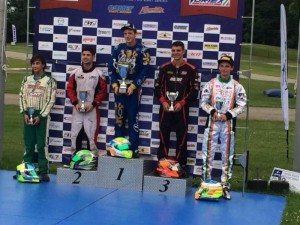 Crown Point, Indiana racer Mick Gabriel is in the midst of back-to-back national karting events and has reason to be confident heading into this weekend’s third round of the World Karting Association Manufacturers Cup Series at Michiana Raceway Park near South Bend, Indiana.

First, Gabriel is coming off his first Man Cup triumph in April at Carolina Motorsports Park, where he won the TaG Senior main event aboard his family-owned Tony Kart.

Following a handful of regional events this past spring, Gabriel picked up a ride as an ART GP America factory driver at this past weekend’s United States Pro Kart Series’ second round at MRP. And Gabriel turned some heads in a very competitive Leopard Pro division, which started 34 karts in Saturday’s main event.

After finishes of eighth and fifth in the pair of 10-lap heats, Gabriel started the 25-lap feature in P3 and raced his No. 63 ART GP chassis to an impressive second-place finish to winner Michael Geringer.

On Sunday Gabriel said the team experimented with some setup changes that set them back early in the day. After becoming involved in some wrecks in the heat races, Mick started 25th in the final and persevered to a respectable 10th-place finish and fifth-fastest lap time in the race.

“We had a good weekend and I can’t thank ART GP America, BBS Engines and Brian Seward for making the opportunity possible,” Gabriel said this week. “I was picked up as a factory driver right before the race and had no testing on the ART GP chassis. I’m really happy I could give those guys a good run, and it was a one-time sponsored ride for USPKS. I’ll be back on the Tony Kart this weekend.”

This weekend will consist of Gabriel looking for win No. 2 on the 2014 WKA Man Cup circuit. He’ll enter the TaG Senior division both Saturday and Sunday as he aims for the class’s national championship. Gabriel says there is a chance he’ll run Parilla Senior, as well, but as of now it’s undecided.

“We’re looking to pick up where we left off at Kershaw,” Gabriel stated. “I’d like to sweep the weekend in TaG Senior or at least run top-three both days. We have a lot of experience at MRP so I think we’ll be in pretty good shape. We’re looking forward to WKA race and it should be another fun weekend.”

Mick Gabriel is an 18-year-old two-cycle sprint kart racer hailing from Crown Point, Indiana. Gabriel is a WKA Manufacturers Cup feature winner and finished second in the TaG Senior 1 feature in 2013 at the Michiana Raceway Park Man Cup Grand Nationals. Gabriel rides No. 23 Tony Karts prepared by his father, Michael, and is supported by BBS Karting Technology and Franklin Motorsports.