Large Number of Drivers at the DKM in Wackersdorf

Filled up fields at the Prokart Raceland Wackersdorf 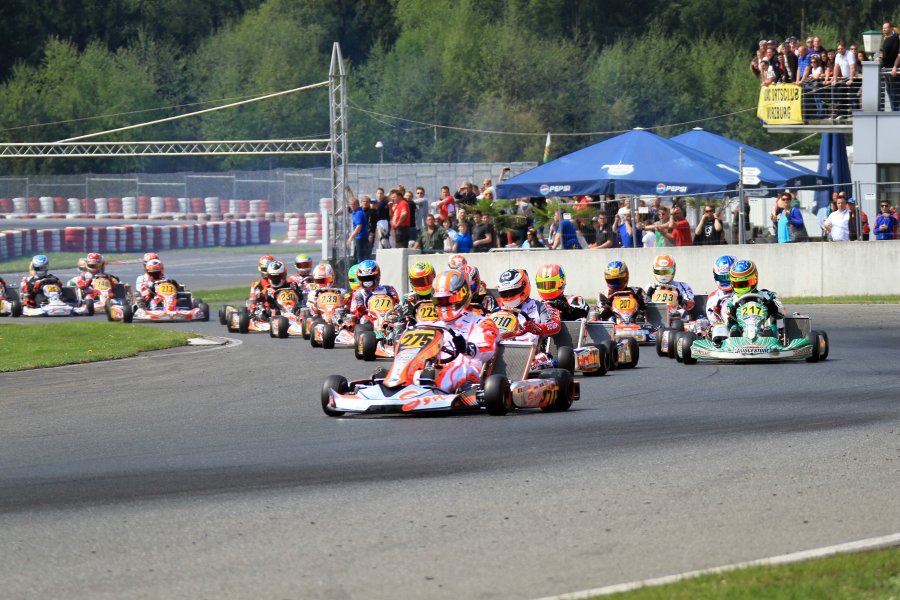 It’s going to be packed at the Prokart Raceland Wackersdorf: 186 drivers from more than 25 nations are going to start at the second event of the German Kart Championship. In addition to the best drivers from Germany, numerous international top drivers have signed up again as well.

The German Kart Championship continues to experience an upwards trend. After a successful kick-off in Bavarian Ampfing, the engines are going to be running again eight weeks later in the first league of German kart racing. The location is the Prokart Raceland Wackersdorf: The 1.275m long track belongs to the most modern tracks in Germany and makes for ideal surroundings. The track is also very popular among the drivers due to challenging passages and a long start-finish-straight. That’s also one of the reasons why the European Kart Championship has been taking place at Wackersdorf for several years now – this year from July 10th-13th.

The drivers are going to present a large variety on the track. Even though the KF-class is one of the biggest problem children in surrounding foreign countries, the DKM is happy about an attractive field of participants. 48 drivers signed up for the race in Upper Palatine. In the fight for the title, British Jehan Daruvala (Ricky Flynn Motorsport) already left his mark at the kick-off. At his DKM-premiere, he achieved pole position and won the second final race. “The competition at the DKM is really strong and it’s a lot of fun to drive here”, said the Indian contently. He can’t allow himself to rest on this success though, because a lot of strong drivers are following him in his group of participants. Manuel Valier (Mach1 Motorsport) won the first final race and was only stopped due to a technical defect during the second race. Reigning vice Champion Hannes Janker (TB Motorsport Racing Team) and junior Champion Martijn van Leeuwen (Keijzer Racing) suffered similar fates. Both of them belonged to the title favorites as well but collided during the second race and now have to make up for the missed Championship points. At the fight for victories, Callum Ilott (Team Oakes) and Alessio Lorandi (Baby Race Srl.) are surely going to play important roles in Wackersdorf as well. Both of them belong to the top drivers of the KF-class and are getting in on the forefront of the European Championship. After three of four ranked races, Ilott is leading the Championship.

At the juniors, a driver from the Ricky Flynn Motorsport team set the pace as well. Enaam Ahmed (Ricky Flynn Motorsport) won both final races in Ampfing and is leading the Championship with a considerable advance. “I was very content with the kick-off weekend. The DKM is very professional and it’s a lot of fun to drive in this series”, said the young Brit after the kick-off weekend in a good temper. There was a lot less reason to rejoice at the German camp though: David Beckmann and Mick Junior (KSM Racing Team) started as big German hopefuls for the title. Both of them had really difficult starts though and are far back on the list of rankings after the kick-off weekend. They’re going to try to achieve a trend reversal in Wackersdorf: “Two accidents robbed me of all my chances in Ampfing. But now the cards are going to be dealt anew and I’m going to fully attack again”, said David Beckmann fiercely. Currently, the best German driver is rookie Max Hesse (Solgat Motorsport). At his first DJKM race, he immediately landed a place on the winners’ podium and is currently on fifth place at the Championship. The field of participants in Wackersdorf is another reason to rejoice – the juniors set an enrollment record, counting 58 drivers.

At the shifterkarts, the European Championship that is going to take place two weeks later is already casting its’ shadow. Numerous drivers are taking the chance to use the second event of the German Shifterkart Championship for preparation. In addition to the enlisted participants, other top drivers are going to start as well. Among them repeated Kart World Champions Davide Foré (DTK Racing Team Poland) and Jonathan Thonon (Praga Kart Racing Team). In the fight for the title, an exciting fight is emerging between Rick Dreezen (Zanardi) and Jorrit Pex (CRG Holland) after the kick-off. Both of them have won the DSKM three times so far and are now aiming for the fourth success. After the race in Ampfing, Rick Dreezen seems to have better chances though. He achieved maximum points due to the best time at qualifying and a double victory. Jorrit Pex is not far behind his Belgian opponent though, due to achieving all of the second places. Wackersdorf is one of the Dutchman’s favorite tracks: “I feel very comfortable in Wackersdorf. In 2012, I won the European Kart Championship in the KZ1-class here.” Dominik Schmidt (Energy Corse) is currently leading the German camp on the overall fourth place. All in all, 80 drivers are going to start in this class.

Series coordinator Stefan Wagner is happy about the foreign team’s huge interest in the German Kart Championship: “My phone temporarily did not stand still. For Wackersdorf, we had to create four heat groups at the juniors and the shifterkarts, which is something we haven’t had to do for years. The DKM is also strongly manned with 48 drivers. I’m really looking forward to these races, which are going to be really interesting considering the numerous top drivers.”

Everyone not able to follow the races at the Prokart Raceland on site, can rely on more than 16 hours of live images again. At the last race in Ampfing, the DKM video-live-stream counted more than 30.000 viewers. Additionally, the DKM is providing an extensive live-timing-service and lots of background information on the official facebook fanpage. The starting signal is going to be on Saturday (June 28th 2014) at qualifying, followed by the heats and repechages to qualify for the finals. These are going to start on Sunday (June 29th 2014) at 10:35 a.m.