From Genk another step towards the European titles 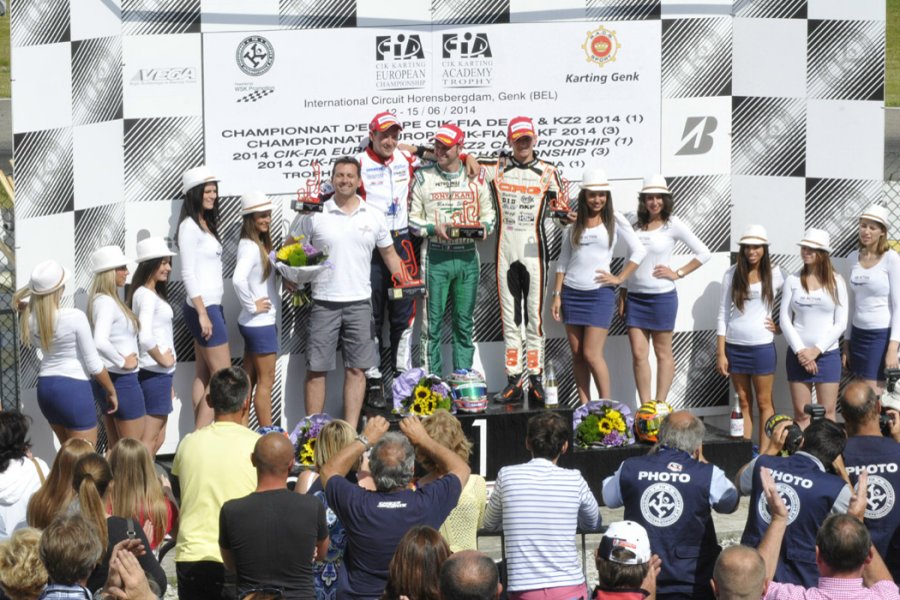 The journey towards the 2014 European CIK-FIA Karting titles is proceeding smoothly. Another important step has just been taken on the circuit near Genk, in Belgium. The Flemish facility hosted the first out of two rounds of the KZ and KZ2 categories and the third out of four round of the KF Championship. The season opener of the CIK-FIA Academy Trophy, which has got three events on schedule, completed a programme full of hard-fought races: at the end of the day, in fact, the standings underwent further changes. So, fans cannot miss the delayed broadcast of today’s Finals, which will be aired by Rai Sport 2 at 19.55 on next 18 June. The usual TV report will offer a complete recap of the weekend, always on Rai Sport 2 on Friday 20 June at 23:40.

Ardigò on target in KZ
The Final is the race which always offers the greatest surprises. Genk was no exception, and the Italian Marco Ardigò (Tony Kart-Vortex-Bridgestone) managed to beat the French Armand Kozlinski (Intrepid-TM-Bridgestone), who had been dominating up to then. Ardigò succeded in winning the Prefinal and grabbed the pole position in the Final. He kept the lead of the race from the beginning until the end. Rick Dreezen (Zanardi-Parilla-Bridgestone), another protagonist of the first part of the event, confirmed to be in great shape and trailed in Ardigò’s wake. However, the Belgian could not close the gap with the leader and finished second, a good result for his Championship. The battle for the third place was more uncertain. The Italian Paolo De Conto (Birel-TM-Bridgestone) got really close to the third step of the podium, but during the last laps  he had to pull over and gave way to the English Jordon Lennox-Lamb (CRG-Maxter-Bridgestone). The Championship standing is led by Ardigò with 33 points, followed by Dreezen with 29 and by Lennox-Lamb with 22. 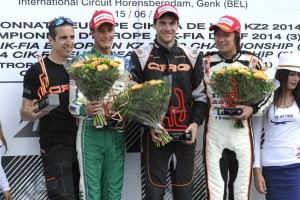 An outstanding Nielsen makes his leadership in KF steadier
The Final of the KF category in Genk was unpredictable until the end. The Danish Nicklas Nielsen (Kosmic-Vortex-Dunlop) had to fight hard to remain in the lead until the chequered flag. He needed to fend off the attacks of the English Callum Ilott (Zanardi-Parilla-Dunlop) and Lando Norris (FA Kart-Vortex-Dunlop): thanks to these three drivers the race was thrilling. They exchanged positions continuosly until an engine failure stopped Norris, during the last laps. The Londoner lost the leadership which was taken over by Ilott, who kept it for only two laps. Nielsen, in fact, managed to overtake him and to win the race. Excellent race also for the English Tom Joyner (Zanardi-Parilla-Dunlop), who finished third, and for the Italian Alessio Lorandi (Tony Kart-Parilla-Dunlop), who managed to grab the fourth place after running the risk to miss qualifying.  Nielsen is now at large in the standing thanks to his 76 points, Ilott is at 67 and Joyner at 53.

Dalè leader of the race and of the KZ2 Championship
Also in the KZ2 category we heard the Italian anthem thanks to the victory of Andrea Dalè (CRG-Maxter-Bridgestone), who placed first ahead of the Danish Andreas Hansen (Tony Kart-Vortex-Bridgestone). The latter, who finished with a six-second gap from the leader, had to deal with the Italian Fabian Federer (CRG-Maxter-Bridgestone), who accomplished a great recovery and crossed the finishing line only three tenths of a second behind the runner-up. The standing of the Championship sees the first two positions occupied by the winner and the runner-up of the Belgian round: Dalè is in the lead with 35 points and Hansen second, 8 points behind. Third the Swedish Douglas Lundberg (Alpha-Parilla-Bridgestone) with 18 points. 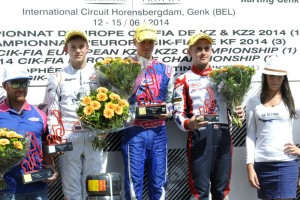 The Japanese Ota wins in the Academy Trophy
Kakunoshin Ota celebrated his birthday with the victory in the Final of the Academy Trophy,  the Parolin-Fim-Bridgestone single make series. After finishing 5th in the Prefinal, the Japanese  gained the lead on lap two of the Final and kept the head of the race until the end. The runner-up was the Dutch Rinus Van Kalmthout, third the British Martin Ross. The leader of the standing is Van Kalmthout with 29 points. Ota is 4 points behind and the Turkish  Berkay Besler 8.

Americans Show Speed
Gary Carlton and Danny Formal (Costa Rica) contested the KZ2 category, however, were unable to qualify for the main event. Both were slotted into the second Prefinal. Carlton, who was underweight after his opening heat, started 15th after running top-seven in his four heat races. Starting in the middle of the field, he was unable to avoid an opening lap wreck and was driven over. He restarted and never gave up, posting the fast lap of the race while finishing 30th. Formal had a challenge path in the heat races and only finished five laps in the Prefinal.

Michael Benyahia and Jared Cordova represented the Red, White and Blue in the Academy Trophy division. Both were in the Second Chance Heat, with Benyahia placing eighth with the fast lap honors. It was not enough as he would miss the final. Cordova had issues and would not finish the race.