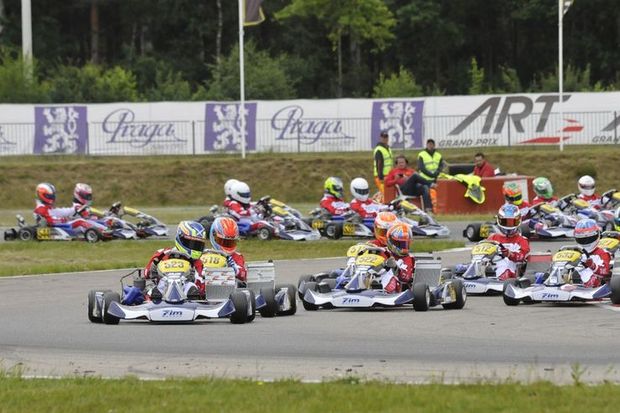 The Academy class fans out at the start at Genk
(Photo: pres.net images)

ALL THE PRETENDERS TO THE PODIUM IN GENK.
A tight schedule the one in Genk (B). Today the best drivers emerged after the qualifying heats and, tomorrow, they will battle for a place on the podium in each of the three out of four categories racing in Genk for 2014 European CIK-FIA Championship. The Belgian track hosted the heats of the KZ and KZ2 categories, at their first round of the season. The KF, on the other hand, is at its third out of four rounds. The Horensbergdam Circuit in Genk is also the venue of the season opener of the CIK-FIA Academy Trophy, the single make series for rookies in international competitions. There are more than 220 drivers coming from 38 different Countries, ready to challenge each other to achieve the best position on the starting grid. Tomorrow, the Prefinals and then the Finals in the afternoon.

KOZLINSKI SEES HIS OPPONENTS GETTING NEARER IN KZ.
Arnaud Kozlinski (Intrepid-TM-Bridgestone) is still in the lead but the gap is thinning. The French set the best time yesterday and won the first heat today. But in the second heat he was beaten by the Belgian Rick Dreezen (Zanardi-Parilla-Bridgestone). Tomorrow morning, in the Prefinal, the two drivers will occupy the front row with Kozlinski in pole position. Behind them two other favourites: the Italian Marco Ardigò (Tony Kart-Vortex-Bridgestone), who is recovering fast and closed the gap from the seventh time set in qualifying, and the Belgian Jonathan Thonon (Praga-Parilla-Bridgestone) who will start next to Ardigò. Third tow for two other top drivers: the English Jordon Lennox-Lamb (CRG-Maxter-Bridgestone) and the Dutch Jorrit Pex (CRG-TM-Bridgestone), both ready to battle for victory in the season opener. 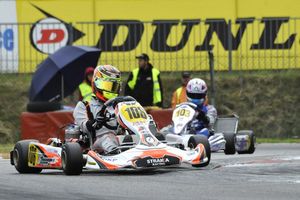 ILOTT BACK IN THE LEAD IN KF.
There’s an all British challenge in KF. Three heats were won by the Londoner Callum Ilott (Zanardi-Parilla-Dunlop), who overtook another Londoner, Lando Norris (FA Kart-Vortex-Dunlop). The latter, yesterday’s pole-sistter, won two races today, but tomorrow he will have to leave the pole position of the Prefinal to Ilott. There are great expectations for a great battle between the two British drivers on the front row. Behind the two Londoners, there is once again Hannes Janker (Zanardi-Parilla-Dunlop): thanks to the two good placings achieved today, the German confirmed his excellent performance in qualifying achieving the second row of the Pre-final. The Danish Nicklas Nielsen (Kosmic-Vortex-Dunlop) will be by his side. Also the Finnish Niko Kari and the Swedish Linus Lundqvist (both on Tony Kart-Vortex-Dunlop) achieved good results and they occupy the slots in third row. The qualification of the Italian Alessio Lorandi (Tony Kart-Parilla-Dunlop) was a bit trickier: he won one of the six heats but he had to go through repechage for the bad performance he achieved in the other races.

VERSCHOOR IN POLE IN THE ACADEMY.
The Dutch Richard Verschoor confirms his pole position in the Academy. Next to him his country fellowman Rinus Van Kalmthout. In secod row the Turkish Berkay Besler and the Brazilian Murilo Della Coletta

TOMORROW THE LIVE STREAMING OF THE FINALS.
The live streaming of the drivers’ parade and of the Finals tomorrow on www.cikfiachampionship.com and www.cikfia.tv. The delayed broadcast of the event on RaiSport 2 on Wednesday 18th June at 19:55.