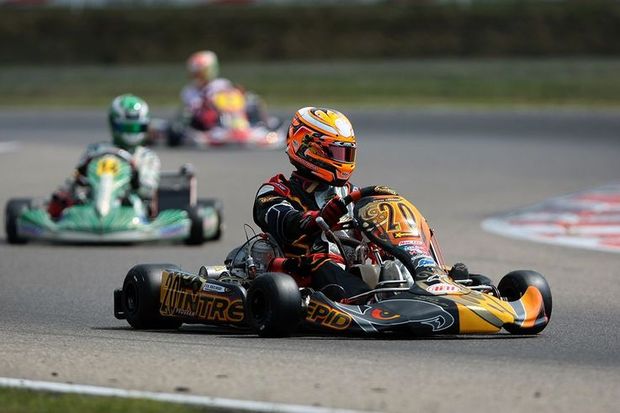 THE EUROPEAN CHALLENGE HAS BEGUN IN GENK.
Free practice, qualifying and, in the evening, the first heats: this is the tight schedule the 170 entrants to the European CIK-FIA Championship had to cope with today. The round of the event is hosted by the Horensbergdam Circuit, the 1,350 metre long track near the town of Genk, in Belgium. The facility is the venue of the season opener of two categories: the KZ and KZ2. This is the first out of two rounds of this 2014 championship, and the event is taking place concurrently with the third out of four rounds of the KF category. The programme of the weekend is completed by the CIK-FIA Karting Academy Trophy; thanks to the Trophy the number of drivers on track this weekend is over 220. Also this important single make category is at its first appointment. The Trophy, apart from the season opener of Genk, has got two more rounds on schedule in this 2014 season.

GOOD START FOR ARNAUD KOZLINSKI IN KZ.
Arnaud Kozlinski (Intrepid-TM-Bridgestone) hit the target in KZ and set the fastest time thanks to his che 52”861 in the first session. The Belgian Jonathan Thonon (Praga-Parilla-Bridgestone) replied to the French driver in the following session and, on the track near his hometown, he stopped the clock only 28 milliseconds from today’s best time. Third time for the Italian Paolo De Conto (Birel-TM-Bridgestone), only 53 milliseconds behind the pole-sitter; fourth position for the Dutch Jorrit Pex (CRG-TM-Bridgestone), 60 milliseconds slower than Kozlinski. The following slots were occupied by drivers driving for two other different teams: the French Anthony Abbasse (Sodi-TM-Bridgestone) is fifth with 52”953, followed with a gap of only three milliseconds by the Italian from Rome Flavio Camponeschi (Tony Kart-Vortex-Bridgestone). Generally speaking, there is great uncertainty in the top category with 6-speed gearbox: there are six different manufacturers in the top positions. Tomorrow’s heats will give a more definite shape to the race which has just begun. 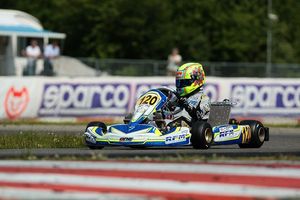 LANDO NORRIS BEGINS HIS PURSUE TO THE LEADERSHIP IN KF.
Today, the English Lando Norris (FA Kart-Vortex-Dunlop) challenged the leader of the Championship, the Danish Nicklas Nielsen (Kosmic-Vortex-Dunlop). Norris, second in the Championship, is eager to battle with the leader and made his intentions immediately clear setting the fastest time with 53”549. Nielsen replied with the fifth time, 0”177 behind the pole-sitter. The surprise of the day was the German Hannes Janker (Zanardi-Parilla-Dunlop). He set the second time, 0”113 from Norris. Janker beat the Italian Alessio Lorandi (Tony Kart-Parilla-Dunlop) and the British Callum Ilott (Zanardi-Parilla-Dunlop) into fourth and fifth position. The Russian Nikita Sitnikov (Tony Kart-Parilla-Dunlop) is sixth. Norris’s good day continued in the first two qualifying sessions of the weekend at the end of the day: a victory each for him and his fellow countryman Ilott. Nielsen, seventh, will need to close the gap tomorrow.

ANDREA DALÈ HUNTS FOR SUCCESS IN KZ2.
The KZ2 category is always in turmoil. The Italian Andrea Dalè (CRG-Maxter-Bridgestone) has had an outstanding beginning of season and today, too, he set the best time with 52”801, ahead of the Dutch Marijn Kremers (Birel-TM-Bridgestone) – who completed his best lap in 52”941 -. Behind them the Danish Andreas Hansen (Tony Kart-Vortex-Bridgestone) and the Czech Jan Midrla (Birel-TM-Bridgestone), who managed to finish with a gap within the 2 tenths of a second. They finished ahead of the Swedish Douglas Lundberg (Alpha-Parilla-Bridgestone) and the Italian Luca Corberi (Kosmic-Vortex). Also the KZ2 ran its first heats in the evening: Midrla won two of the four heats, while the other two races were won by Dalè and Lundberg.

RICHARD VERSCHOOR IS THE BEST IN ACADEMY TROPHY.
The new season has brought a brand-new group of promising young drivers to the CIK-FIA Academy Trophy. The single make series, on the karts supplied by Parolin-FIM-Bridgestone, recorded the great performance in qualifying of the Dutch Richard Verschoor: he stopped the clock at 56”675, ahead of the English Martin Ross. Third the Brazilian Murilo Della Coletta, then the Dutch Rinus Van Kalmthout, the British Oliver York and the German Max Hesse.

ON SUNDAY THE LIVE STREAMING OF THE FINALS.
Next Sunday the live streaming of www.cikfia.tv and www.cikfiachampionship.com will cover from the drivers’ parade to the Finals. On Rai Sport 2, on Wednesday 18th at 19.55, the delayed broadcast of the Finals and, on Friday 20, the special TV report.