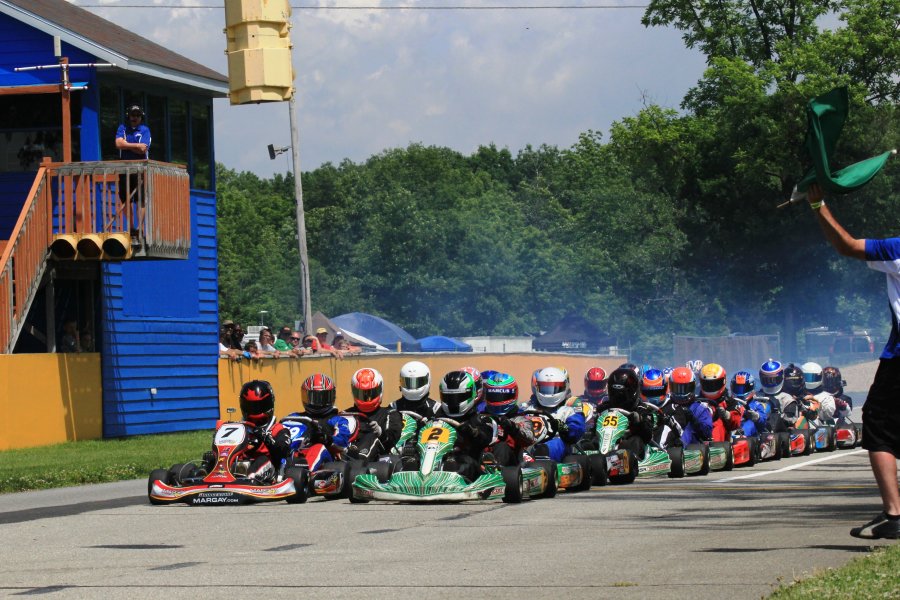 The MG Tire / L & T Manufacturing Route 66 Sprint Series held rounds three and four at Michiana Raceway Park (MRP) on June 7-8 with a large turnout of over 300 entries.  The event was sponsored by KartLift. Although rain is often a factor at MRP, all races were ran in dry conditions even after a Saturday night shower.  Only two drivers were able to capture double wins over the weekend. 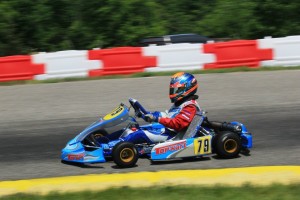 David Malukas won in Leopard Junior on both Saturday and Sunday and Alex Bertagnoli won the Saturday Komet and Yamaha Cadet finals. The competition was close with six finals having a margin of victory of .1 second or less.  The Komet Cadet final on Sunday saw Giovanni Bromante win by just .008 seconds over Alex Bertagnoli.

Michiana Raceway Park, which has been in operation for over 20 years, is once again being managed by Garry Lobaugh who has much experience at operating several top rated kart racing facilities.  Garry and his staff had been hard at work giving the facility a facelift and energizing local staff to provide competitors a safe and challenging environment.  Garry stated, “We not only want to give the racers a great place to showcase their skills, but also provide family-friendly viewing areas and nice amenities for spectators.”

The first final racing both days was the Haddock Limited/Comet Kart Sales Komet class.  Ryan Weyer (Merlin) set quick time in qualifying on both days and swept the day on Sunday winning both the pre-final and the final.  Christian Besasie (Merlin) captured the pre-final and final on Saturday after Weyer dropped out on lap six.  Delaney Keaveny, Kyle Gluth, Jeremy Roche and Roman Padans rounded out the top five on Saturday.  On Sunday Besasie, Gluth, Keaveny and Roche finished in the top five. 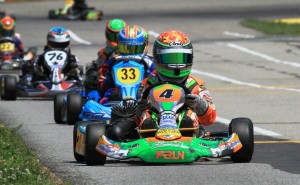 The Hollywood Crane Service Kid Kart class was racing next where Dylan Julien captured the pole on Saturday.  Cole Marr won the pre-final but Julien pulled away by 12 seconds for the win in the final. Pierce Sonderup, Charlie Kremer, Elliot Cox and Cole Marr rounded out the top five.  On Sunday, Jacob Ewing swept the day after suffering a DQ on Saturday.  Cole Marr, Dylan Julien, Pierce Sonderup and Charlie Kremer finished in the top five.

The next class racing was the Haddock Limited/Express Karts & Parts Komet Cadet class.  Alex Bertagnoli (Merlin) swept the class on Saturday qualifying on pole and winning both the pre-final and final, pulling out to a three second win over Austin Schaff in the finish.  Giovanni Bromante, Sam Mayer and Matthew Northrop rounded out the top five.  On Sunday, James Lynch set quick time in qualifying and Bertagnoli won the pre-final.  Bromante would take the final win by just .008 seconds in a pass made at the finish line.  Austin Schaff, James Lynch and Stephen Dial rounded out the top five on Sunday.

The next class racing was the RLV Yamaha 100 Senior class with large fields of 25 entries.  Collin Griffin captured the fast qualifying award on Saturday and Brad Brittin set quick time on Sunday.  Pre-final wins went to Collin Griffin on Saturday and Nick Stagl on Sunday.  Killian Keavany (Top Kart) edged Griffin for the Saturday final win by just .063 seconds on the last lap. Stagl, Joshua Fierke and Robby McQuinn finished in the top five on Saturday. Darin Marcus (Merlin) held on for the final win on Sunday holding off Griffin, Christian Ledesma, Keavany and Stagl in the top five.  Marcus commented that it was one of the most difficult wins to get in his racing career and that the competition was really close.

The CKT Leopard 125 Junior class was the only class that had a repeat winner on both days.  David Malukas (Top Kart) swept qualifying, pre-final and the final on Saturday.  On Sunday it was Mike McAndrews showing the way in qualifying and the pre-final, however Malukas would take the final win by .175 seconds over McAndrews.  Brandon Lemke, Emily Hurlbert, Dillon Schwanbeck, Ethan Tyler and Brandon Basela would claim top five finishes over the two days. 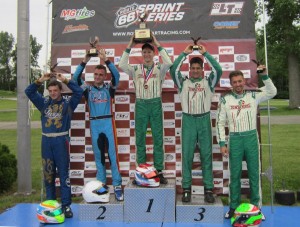 The next class racing was the Triple E Sales Yamaha 100 Rookie class with 13 entries.  Mason Maine (Tony Kart) was again the man to beat on Saturday as he swept qualifying, pre-finals and took the final win. Conner Churchill, Tate Steinman, Ben Chefiec and Cameron Christ rounded out the top five on Saturday.  On Sunday it was Cameron Christ (Birel) taking the pre-final and final victories.  Tate Steinman, Mason Santiago, Taylor Maas and Conner Churchill finished in the top five on Sunday.

The Franklin Motorsports Leopard 125 Senior class staged next with 27 entries. Some of the most competitive racing was seen in this large class as the fans flocked to the fence to view this class.  On Saturday Elliot Finlayson (Tony Kart) continued his hot streak from rounds one and two by sweeping qualifying, pre-final and the final taking the win over Armin Cavkusic by .324 seconds. Tommy Anderson, Michael Geringer and Colton Ramsey finished in the top five within three seconds of the winner at the finish.  On Sunday Armin Cavkusic (FA Kart) swept the day as Finlayson dropped back in the final with a tire going flat. Cavkusic was able to pull out to a two second win over Michael Geringer and Tommy Anderson.  Derek Dignan and Colton Ramsey rounded out the top five.

The Yamaha 100 Junior class sponsored by Woltjer Racing Engines was up next with 16 entries.  The top four qualifiers of Mike McAndrews, Becker Reardon, Brandon Lemke and David Malukas were locked in a tight battle both days and all would finish less than a second apart at the finish.  On Saturday McAndrews (Birel) held off Lemke at the finish by just .111 seconds.  On Sunday Lemke (Merlin) would take the win over Reardon by just .042 seconds.  Dillon Schwanbeck also finished in the top five both days. 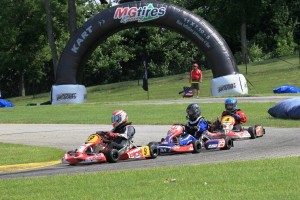 The Switch Racing Engines Yamaha 100 Cadet class was the last class racing  with a big field of 21 entries.  Alex Bertagnoli qualified on the pole Saturday and Matthew Northrop set quick time in Sunday qualifying.  Bertagnoli (Merlin) was able to pull out to a two second win over Stephen Dial on Saturday with Northrop, Maks Kowalski and Giovanni Bromante rounding out the top five.  On Sunday Austin Schaff (Merlin) swept the pre-final and final over Bertagnoli with Sam Mayer, Bromante and Northrop finishing in the top five.

Merlin chassis captured the most final wins over the weekend with seven followed by Birel and Top Kart with four wins each.  Tony Kart had two wins and FA kart had one victory.