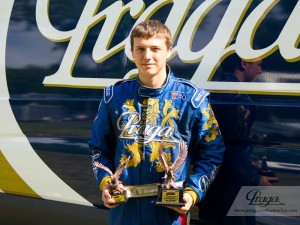 Praga was well represented with 3 drivers in the Leopard 125 Senior class. Michael Geringer was, as always, among the top drivers fighting for podium positions. On Saturday, with a P7 qualifying, he gained 2 positions in the pre-final to start the final from P5. After a tough start, Geringer was on par time-wise with the leaders but didn’t have enough laps to make up the difference, finishing just out of the top 3 (P4). Sunday proved to be a better day for the 18 year-old, with a P4 in qualifying and the pre-final. A good start allowed him to pick up 2 positions for the 12 lap final, ending with a 2nd place podium finish. Kindra Hurlbert also performed well, qualifying P14 on Saturday and picking up 8 positions in the pre-final to start the final P6. Hulbert managed to end the final inside the top 10 with a 7th place finish on Saturday.

Praga’s newest driver Andrick Zeen, who used this race as an initial opportunity to test the Praga chassis, fell into some bad luck in his first time out. Driver contact kept him from showing his true potential, but Zeen was still extremely impressed with the Praga chassis, even after the first day. “This race was my first time on Praga, and we used this as a chance to test the chassis and optimize the kart setup for the USPKS race in two weeks. Within a day I was comfortable on the Praga Dragon, and we quickly got the kart where it needed to be to perform. We had some issues with power and driver contact, but we definitely came away from this race knowing what needs to be done to win in two weeks at USPKS.”

In TaG Junior, 13-year-old Emily Hurlbert was consistently fast all weekend. Despite an aggressive field, she managed to hold P4 throughout both race days, and finished just outside the top 3 in both Saturday’s and Sunday’s finals (P4). Praga’s other drivers in Leopard and Yamaha Junior (Drew Fortini and Emmanuel Richmond) also made progress working with their Praga chassis throughout the weekend. Team Director Blake Wankowski was very pleased with the team’s presence at the race. “The Praga North America team has evolved rapidly in a very short period of time. We are growing with every race in both experience and numbers, and we will keep working to promote the Praga chassis and prove its potential with more podiums and wins.” The Praga North America race team will be seen next at the 2nd round of USPKS, also taking place at Michiana Raceway Park in Indiana.