Local Drivers Shine During Round Four of California ProKart Challenge 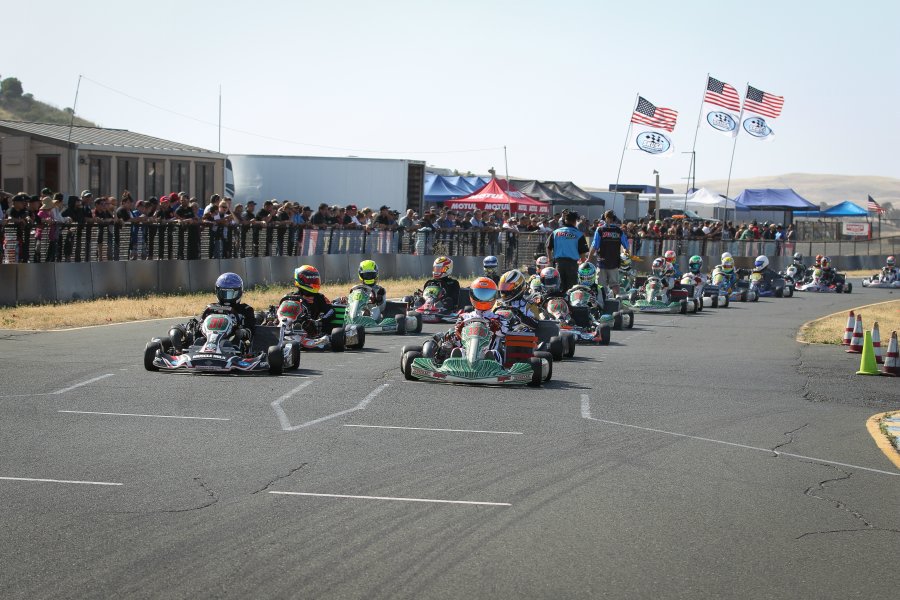 This past weekend marked an exciting return for the Superkarts! USA organization to the historic Sonoma, California area. The Simraceway Performance Karting Center has been home to a number of karting events over the years, including the inaugural SKUSA Pro Tour event in April 2010. Superkarts! USA returned to a cheerful, welcoming crowd on June 6-7 to host Round Four of the California ProKart Challenge. Over 130 drivers competed on the famed National course in the reverse direction – the largest turn out at this track year-to-date for any regional or national series. The weather was picture perfect for racing, and the PKC championship chase saw a shake-up as a number of northern California drivers put their ‘home track’ advantage to good use toward reaching the top step of the podium. 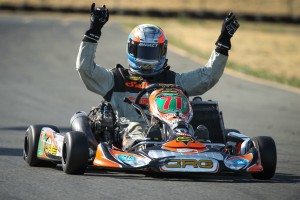 The Vemme Kart/Extreme Karting S1 Pro Stock Moto division welcomed the largest field of the season, with 13 drivers looking to secure the victory on the day. Qualifying began with NorCal drivers going 1-2-3, as Brian Keck edged out former SuperNationals winner Ron White by just seven thousandths of a second. Daniel Langon was third in the order, with SoCal driver Matias Podboj fourth ahead of championship leader Billy Musgrave. In Heat 1, Keck and White went back and forth for the lead until a mechanical issue slowed the former ProMoto Tour champion, leaving the top qualifier to score the win with Musgrave up to second. Musgrave grabbed the holeshot in Heat 2, leading all 10 laps for the win, with Keck losing a battle to Langon for second. White drove from the back of the field to fifth, putting him within striking distance when the main event began. Musgrave retained the lead when the 20-lap event began, but White was on the charge early. Fast on cold MG Tires, White moved into the lead on lap three. From there, he posted the fast laps of the race to gain a six-second advantage as he led the remaining laps for his first California PKC victory. Musgrave was shuffled back outside the top-five at one point, but managed to earn the runner-up position. Nic LeDuc put in an amazing drive of his own to land third overall. Starting 22nd on the combined S1/S2 grid, LeDuc put himself on the podium in the closing laps, dropping Matias Podboj to fourth and Troy Diede to fifth.

Austin Elliott also put NorCal on top of the podium in the Mike Manning Karting TaG Senior class, earning his first victory of the season. SoCal racer Nathan Seegrist set the tone, laying down the fast lap of the qualifying session to better the early time set by Sonny Cervelli. They went 1-2 in the opening heat race, with Seegrist leading all nine laps of the heat race as point leader Jake Craig charged up to third with the fast laps of the race. That allowed Craig to leap into the lead for the second heat, and score the win over Cervelli, with former Indy 500 Rookie of the Year driver Phil Giebler third in his season debut. The first half of the main event was a duel between Craig and Cervelli. Craig finally shook him off with seven laps to go, but found himself hounded by Seegrist and Elliott. On the final lap, Seegrist took the lead away with Craig fighting back. The two made contact and that allowed Elliott to slide through for the lead and the victory. Cervelli moved up to second, with Seegrist holding on to third. Craig would not reach the checkered flag, and be classified 11th –while Giebler and Nick Ramirez rounded out the top-five. 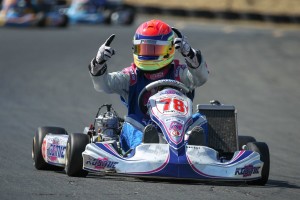 The season in the 2 Wild Karting S4 Master Stock Moto category has belonged to returning driver Darren Elliott. After claiming the first three feature wins this year, Elliott began Saturday’s fourth round of racing as the driver to beat. He cleared the field in qualifying by nearly four tenths of a second, and led all 10 laps of the opening heat race over Fernando Diaz with NorCal driver Justin Bennett close behind in third. Elliott led all but the final circuit in Heat 2, dropping back to fourth with a mechanical issue. That allowed Diaz and Bennett to slide through for the top two positions, with Robert Marks up to third. The chance for Elliott’s streak came to an end in the opening corners of the main event. An incident going into the second corner collected Diaz, Elliott, Marks and others. Diaz and Marks were unable to continue, while Elliott rejoined the field at the back of the pack. This allowed Bennett to take the lead and he drove away with the fast laps of the race to a near six-second margin of victory over Rob Logan. Jim Kidd completed the podium, with Rick McAllister finishing fourth and Sean Bond fifth.

Larry Fraser gave the NorCal driver contingent its fourth win of the weekend as he swept the action in the Leading Edge Motorsports TaG Master category. Fraser posted the fast lap in qualifying over Pro Tour driver Anthony Honeywell, making the trek from the southwest area. After securing the win in both heat races, Fraser went untouched in the 20-lap main event to secure his first win of the season. Honeywell was running second until he went off-course and fell to sixth. The Oklahoma driver fought back to cross the finish line second, but was penalized for jumping the start. That promoted Steve Ryckebosch up to second for a NorCal 1-2, with Honeywell back to third. Josh Buttafoco was fourth and two-time SuperNationals winner Billy Cleavelin fifth. 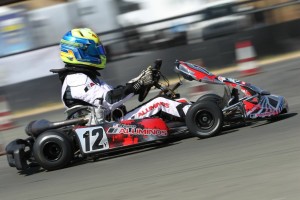 Two other drivers swept the day, with Travis Nicklas and Jeff Krogstad. It was another solid lineup in the Nash Motorsportz S3 Novice Stock Moto class, with seven drivers taking to the Sonoma circuit. Nicklas was at the front of the field all day and won the feature by just over 12 seconds. Steve Wetterau edged out Mark Juncosa for the second position on the podium, with Cris Araujo and Cory Ormonde rounding out the top-five. Jeff Krogstad drove uncontested in the Mother’s Polish S4 Magnum Stock Moto division.

It was another double day for Christian Brooks in the Junior divisions, scoring wins in the Buddy Rice Karting TaG Junior class and the Sunshine Daydream Creations S5 Junior Stock Moto category. Chase Farley was the top qualifier in TaG, as Brooks found himself back in the ninth position. He advanced all the way to the lead in just five laps of the opening heat race, taking the top spot and scoring the win. Royal McKee was the lead challenger in Heat 2, taking the lead for four laps before Brooks secured the win on the final circuit. Brooks stepped up the pace in the main event, pulling away to a 2.3-second advantage at the checkered flag for his third victory of the season. Former Cadet champion Hunter Kelly came on late to steal the runner-up spot from McKee. Phillippe Denes was fourth but removed after technical inspection, advancing Trenton Sparks to fourth and Farley to fifth. Brooks scored his sixth victory of the year, with his third in the S5 class. After winning the two heat races, Brooks went on to earn the main event victory by three seconds over top qualifier Nicky Hays with Anthony Sawyer completing the podium.

It was a very competitive day in the Phil Giebler Racing S2 Semi-Pro Stock Moto, with championship contender Kolton Griffin earning his second victory of the season coming off his first Pro Tour win last month. Point leader Jarred Campbell solidly locked up the fast time in qualifying over Will Preston and Griffin. Campbell led the first nine laps of Heat 1 until contact with S1 driver Matias Podboj. Campbell continued on to finish fourth, but that allowed Cabot Bigham to score the win. Bigham relinquished the top spot for a battle between Jake Craig and newcomer Daniel de la Calle, with Craig coming through on the final circuit to secure the win. They continued their fight into the main event, when contact on lap four put both drivers eventually out of the race. That allowed Griffin to pick up the pieces and drive away to the race victory, moving him into the lead position in the title chase. Hunter Pickett earned his first California PKC podium finish with a second place result, along with Taylor Monnig who finished in third. Curtis Paul Jr. and Carter Williams completed the top-five. 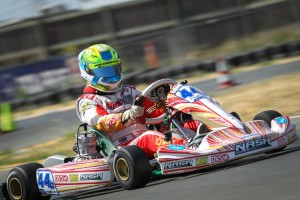 Christian Brooks doubled up with wins in TaG Junior and S5 (Photo: dromophotos.com)

The largest class of the weekend was the Pure Karting TaG Cadet division, with 25 drivers taking the track. Just four thousandths of a second separated the fast laps of Myles Farhan and Trey Brown. Farhan earned the pole position for the opening heat race, but Brown was there for the checkered flag in Heat 1. Jagger Jones got the best of both, with a great start to Heat 2 to take over the lead and pace the field for all eight circuits. Farhan got the jump to begin the main event, but he along with Brown went off-track on the second lap. They fell to the tail of the field, allowing Jones to cruise to a four-second victory, his first of the season. Dante Yu and Jace Jones, Jagger’s brother, completed the podium. Anthony Willis was fourth and Joseph Daniele was fifth. Stephen Brucker was the winner in the TaG Cadet Rookie class, with newcomer Cole Cotham and Carson Mallett rounding out the podium in the 11-driver field.

The California ProKart Challenge will finish off the season with two temporary circuits in September. Round Five is set for Lake Elsinore on September 5-6 for the series’ first visit to the area. The season will come to a close on September 27-28 at the Streets of Lancaster Grand Prix.