Only a few weeks remain until Rotax Summer Shootout 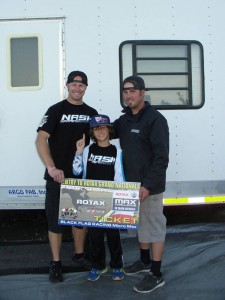 With only a few weeks to go before the annual Rotax Summer Shootout at Miller Motorsports Park in Tooele, Utah, ‘Jetpak’ Jak Crawford has secured thirteen Rotax Micro Max victories since January 1, 2014, even with two remaining races on his schedule before the Shootout event.  The most recent wins came at the Texas Pro Kart Challenge (TPKC) while racing at Jak’s favorite track, the Oklahoma Motorsports Park in Norman, Oklahoma.  The TPKC is a mixed format event featuring both Superkarts! USA (SKUSA) and Rotax classes.

Jak, who just turned nine years old a few weeks ago, also races the Mini-Rok engine in the TaG Cadet format at the TPKC events. This weekend taught the youngster about the element of luck, or bad luck, that is an everyday part of racing.  For both Mini-Rok races on Saturday and Sunday when starting on a dry track for the main race, rain started falling and accumulated water on the track as the Cadet racers were on their normal MG slick racing tires.  Unfortunately for Jak he saw his substantial lead both days diminish and his slight sixty-pound frame was overtaken each day by the same driver who has years more racing experience and a better height-weight distribution for rain racing, especially on slicks.

Jak fought back both days in an effort to regain his first position but Saturday’s big push to first resulted in a spin with two laps to go.  The quick-learning driver faired better on Sunday in the rain on slick tires with a move on the second-to-last corner as he poked his nose in for the lead but lost position on the final turn with muted momentum from his previous inside move.  It was a race to the finish line and while Crawford was gaining quickly on the leader, he lost at the line by a mere .067 seconds.

The young driver continues to learn and improve rapidly under the tutelage and equipment expertise of his Nash Motorsports/Precision Works team that includes Chris Freckleton and Seth Nash.  All Jak’s Rotax successes this year have come under the Nash/Freckleton team that joined forces with Jak in early January after testing at two tracks in the greater Los Angeles area.  Nash Motorsports was also instrumental in recently helping to secure sponsorship between its alliance partner OMP and ‘Jetpak’ Jak.  Starting with the Rotax Summer Shootout, Crawford will be utilizing OMP sponsored racing gear.   Other sponsorships are in the works and will be announced later this summer.

After accomplishing so much already in his Rotax rookie year, Jak’s largest remaining 2014 goal is to win the Cold Stone US Grand Nationals.  As a 2014 Florida Winter Tour winner and a 2014 Challenge of the Americas winner and series champion in Micro Max, ‘Jetpak’ Jak is without a doubt one of the top young driver’s to beat this summer in Tooele, Utah.

Crawford will race in nearly fifty national and regional karting races in 2014. His main 2014 goal is to win the Rotax US Grand Nationals in his rookie attempt.  For more information on ‘Jetpak’ Jak, or to place sponsorship or calendar inquiries, please contact Nikki Crawford at nikocraw@gmail.com. Also, be sure to like ‘Jetpak’ Jak Crawford on his new Facebook page at www.facebook.com/jetpakjakcrawford.