eKartingNews.com Driver of the Month – May 2014 – Jake Craig 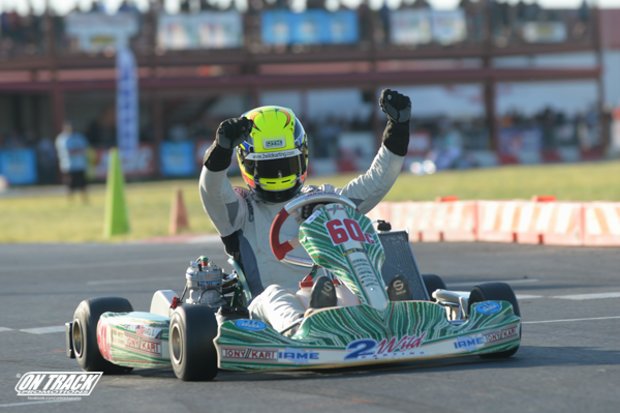 Craig drove to a double-win weekend at the Superkarts! USA SpringNationals (Photo: On Track Promotions - otp.ca)

The Superkarts! USA Pro Tour has entered its fifth year, and with each season has brought a new champion in the TaG Senior division. Multi-time national champion and former Indy 500 Rookie of the Year Phil Giebler was the inaugural champion, followed up by NorCal driver Brett Felkins. Arizona’s Phil DeLaO and Washington’s Andrew Zimmer are the latest to claim the Pro Tour title, each electing not to defend their titles. That has opened up the door for a fifth driver to put his name into the record books as the 2014 SKUSA Pro Tour champion in TaG Senior. California driver Jake Craig is on a similar path his predecessors took by winning both rounds at the recent SpringNationals.

For the first time in series history, the opening rounds of the SKUSA Pro Tour visited the Lone Star State, traveling to the Dallas Karting Complex in Caddo Mills. The 8/10-mile course welcomed the largest crowd of drivers ever assembled for a Pro Tour event, featuring 40 of the best in the headline single-speed category. Craig was among the favorites heading into the weekend, coming off a solid winter effort at the Rotax Challenge of the Americas and the California ProKart Challenge.

Coming just short of the fast time in qualifying for Round #1, Craig was shuffled outside the top-five in Heat #1 and finished seventh. He advanced into the third spot after the second heat race, lining up inside row two for the main event. Top qualifier Louie Pagano and Craig pulled away from the field to settle the Final victory. Pagano led the first eight laps before Craig took over the point and drove away to a 2.5-second advantage in the 15-lap event, earning fast lap honors in the process.

The following day Craig qualified in the third position behind Pagano and David Jurca. The starts at the SpringNationals proved to be a challenge all weekend, and Heat #1 saw Craig get shuffled back to fifth on the opening lap. He managed to climb back into the second position at the checkered flag. Jake benefitted from the start at Heat #2, jumping out to the lead and driving away to the race win for the pole position in the main event. Craig escaped the opening corners unscathed to retain the lead at the start of the 16-lap event. Travis Lowe jumped in behind, but was never close enough to challenge for the top spot as Craig scored his second feature victory of the weekend.

The 2Wild Karting/Tony Kart driver ended the month by putting himself into the Senior Max championship chase at the Rotax Can-Am ProKart Challenge with two wins at the McMinnville Kart Track event on May 31-June 1. The defending series champion fought his way forward Saturday during Round #3, coming from outside the top-five in qualifying to work his way to the top of the podium. Sunday was a complete sweep, earning maximum points to place him at the top of the championship chase by two points over Senior rookie Luke Selliken. Just two more weekends, with four rounds of racing remain with a ticket to the 2014 Rotax Grand Finals on the line.

Craig leads the Superkarts! Pro Tour TaG Senior standings by 35 points over Pagano with the SummerNationals set for August 1-3 at the Modesto Grand Prix in Northern California. Jake is also among the top contenders at the California ProKart Challenge program in both the TaG Senior and S2 Semi-Pro Stock Moto. He entered this past weekend’s event second in TaG and third in his first campaign aboard a Stock Moto machine. 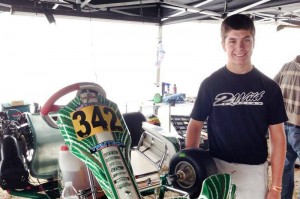 Chassis: Tony Kart
Engine/Engine Builder: TruTech Racing Engines (Leopard, Rotax, Honda)
Sponsors: TruTech Racing Engines, 2Wild Karting, Complete Trailers
Series You Compete In: Rotax Challenge of the Americas, California ProKart Challenge, Superkarts! USA Pro Tour, Rotax Grand Nationals, Rotax Can Am ProKart Challenge
Years Karting: 11
How did you get started in karting? I drove a kid kart at Adams kart track and fell in love.
What has been the high point in your racing career? Being apart of Team USA two times.
What are your goals in racing? Win the CIK-FIA karting world championships
In a few words, how would you describe your driving style? Smooth, aggressive, and consistent

What do you do when not at the track? Train
What are your goals outside of karting? I want to start doing half marathons
What type of street car do you drive? None
What type of street car would you like to drive? BMW 235
What are your pet peeves or things that irritate you? Drivers wrecking one another.
What do you think could be done to improve the sport of karting? Get rid of TAG and make it all one engine or run something in the lines of KF
What are your favorite aspects about the sport of karting? Having such a close relationship with everyone at the track and the fact that it’s pure driving.

May 2014 Driver of the Month – Honorable Mention: