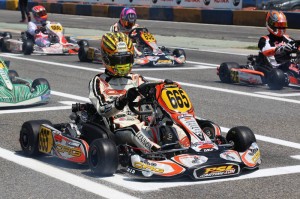 Jordon Lennox-Lamb ran at the top of the 47-kart Rotax DD2 field all weekend long
(Photo by: Fernando Morandi/CRG)

Team PSL Karting took a long trip to the 7 Laghi Kart Track in Castelletto, Italy this past weekend for the second round of the Rotax Max Euro Challenge. Beautiful weather and large fields of racers made for great racing, as always.

“The European Rotax Championship was incredibly well organized and the competition was the top from around the world. It was a real pleasure to be part of this event,” expressed Andrew Campbell, Race Team Manager at PSL Karting.

PSL Karting took advantage of the great conditions and put their best foot forward, seeing good results from the exclusive group of five drivers that they powered throughout the weekend.

Rinus van Kalmthout of Holland, PSL’s Junior driver on their exclusive team for the weekend, looked very promising in the beginning of the week, but his success gave way due to a penalty and crashes during the weekend’s final events. Van Kalmthout started the weekend qualifying quick in sixth, besting a field of 50 drivers behind him, he would start his heat races in the second spot in group B. Saturday’s heats saw Rinus finishing in fifth, ninth, and second place. He started the prefinal in sixth, but encountered some problems and finished in 25th. Moving back up to the front in the final proved to be difficult and Rinus managed to finish in 22nd.

“This weekend was very important for the progress of our chassis development for the junior category,” continued Campbell. “Van Kalmthout (JVD Power) displayed speed early on in the week and also in the heat races. If an unfortunate penalty had not been applied, Rinus would have been P3 in Sunday’s prefinal. After starting from the back in the final, it was difficult to progress with multiple accidents preventing promotion.”

The DD2 drivers of the weekend saw varying levels of success, but success nonetheless. Jordon Lennox-Lamb of Great Britain, Danny Formal of the USA, Alessandro Bizzotto of Canada, and Bryan Eerden of Holland completed the ranks of Team PSL Karting’s DD2 ensemble for the weekend. 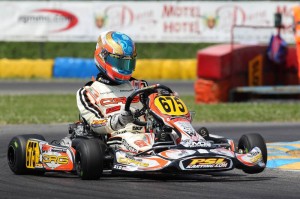 Canada’s Alessandro Bizzotto made his European debut during his first event outside of North America
(Photo by: Fernando Morandi/CRG)

“Jordon Lennox was always quick in the DD2, he was top of the time sheets in official practice. Formal (JVD Power) struggled with difficult conditions regarding grip, while Eerden (JVD Power) was proving his steady consistency in each session. Alessandro Bizzotto (JVD Power), despite the unfortunate incident in his heat, really has developed into a great driver for 2014. For sure the European Championship was good grounds for his karting resume,” noted Campbell of the group.

Jordon Lennox-Lamb had a good weekend overall on his PSL powered CRG chassis. He put in a fast qualifying time, fourth place out of the large 47-kart field. He would start first place in group D for his heat races on Saturday, in which he would finish first, third, and second place. Lennox-Lamb posted the fast time in two out of his three heats, gearing him up for success in the prefinal and final. The prefinal saw Jordon start and finish in third place, and while he continued his good run, the competition in the main event saw him pushed back to fifth place.

Danny Formal, one of the USA’s top racers, pushed for the top results he normally achieves. In the qualifying session, Formal kept it in the top-20, achieving a 19th place finish, putting him in fifth place in the C group to start his heat races. Danny finished seventh and eighth in his first two heats, and picked himself up into fourth place for the last. Starting ninth in the prefinal, Formal gained one position to finish ninth, but unfortunately he dropped back to 14th place to finish the final.

Alessandro Bizzotto of Canada was making his first trip to a race outside of North America for the Euro Challenge event in Italy. Bizzotto had a bit of a rough time among the world’s top kart racers, but took it in stride as a learning experience. He qualified 32nd, and finished his first two heats in 16th and 15th, but did not finish his final heat, completing only nine out of eleven laps. Bizzotto did not qualify for a position in the prefinal, and finished in eighth place in the second chance race, posting the best time, but not quite making the cut to enter Sunday’s events. 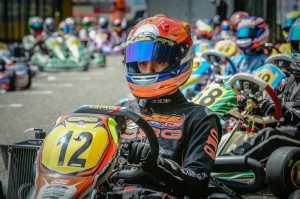 Team PSL Karting continues to focus on driver development, a key to their success at every level
(Photo by: The RaceBox)

The fourth driver in PSL’s DD2 list for the weekend was Bryan Eeden, coming from Holland. Eeden had a good weekend working up the ranks in the competitive DD2 ranks. Qualifying in the 20th position, to start in fifth place in group D, Eeden began to work up the ranks in his three heats. Finishing in 11th place, 17th place, and eighth place, he started 23rd in the prefinal. He made a notable gain of positions in the prefinal, moving from his start in 23rd up to 14th. In the final race, Eeden worked for another three positions, finishing in 11th place, just out of the top ten.

“Now we look forward to Zuera, where the CRG in all categories should be quite strong,” concluded Campbell.

The team will be in attendance of the next round of the Rotax Max Euro Challenge July 14-20, at the Circuito Internacional de Zuera in Zuera, Spain.