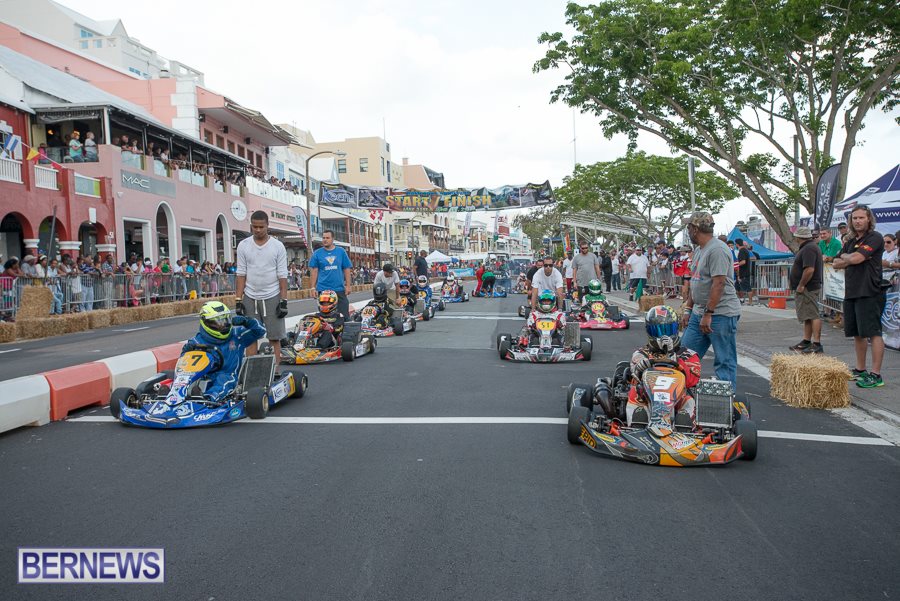 Shifterkarts on the grid for the Keen Ltd Grand Prix in Bermuda (Photo: BERNEWS)

This past weekend (May 31-June 1), kart racing returned to the well-known Front Street of Hamilton, the capital of Bermuda, after a 12-year absence. Led by the Bermuda Karting Club  president Scott Barnes and his assembled staff, the race weekend went off without incident as over 40 racers competed in front of thousands of eager spectators. The BKC’s season had ended prior to the Keen Ltd Grand Prix, leaving the street race solely as an exhibition race to showcase the great karting that the Atlantic island provides.

“As a club, the top three things we wanted this weekend were safety, a strong spectator turnout, and good hard clean racing. I think we hit a homerun on all three! I am excited for next year to do it bigger and better on a new track. We hope to have some boys and girls from the USA come play with us too,” stated BKC President and race promoter Scott Barnes. 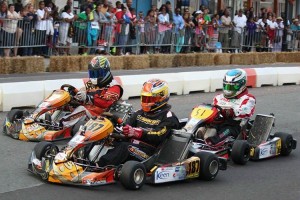 Located 665 miles off the coast of North Carolina, the island of Bermuda is just over 20 square miles in total size. Despite the island’s small size, it doesn’t take you very long upon arriving to find out that the island – and its inhabitants – has a rather large hunger for speed. The island is home to speed boat races throughout the year, as well as a hot bed for motorcycle racing. Thanks to the efforts of those involved in the Bermuda Karting Club, karting has found a solid foothold in Bermuda. It certainly doesn’t hurt that the island is home to a contingent of impressive racers. Led by club President Scott ‘Skitchy’ Barnes, Bermuda has produced drivers that frequently compete in the United States throughout the year. Barnes is arguably the most accomplished of the Bermudian’s who venture across the ocean to race in America. Barnes himself has been racing since age 15. He has competed in the Superkarts! USA SuperNationals, the prestigious Rock Island Grand Prix, the Texas Lone Star Grand Prix, as well as countless other US events. Brandon Franks also makes the trip from his home island to compete in America. Franks was slated to be at this year’s SKUSA SpringNationals competing under the Leading Edge Motorsports banner. After work commitments halted Franks’ attendance in Dallas, he is prepared to be at the rest of this year’s SKUSA Pro Tour. Bermudian’s David Barbosa, Jason ‘Skuzzie’ North (former BKC President), Shannon Caisey, Stephen Corrado and Riany Lindo have all left the island to go wheel to wheel with American’s.

The BKC is finally getting back to a state of solidarity after a past of dealing with challenging logistics, and its fair share of turmoil. The club has spent years without a track to race on after quarrels with the country’s government, which ultimately led the club to fall apart. Around 2005, the club began racing at the Southside Motor Sports Park, which is located in St. Davids alongside the L.F. Wade International Airport. According to Barnes, since the club has been holding its races at Southside, the karting community has grown and strengthened over the last eight years. The club is seeing an improvement in membership numbers, as well as securing its financial standing. The BKC features three junior classes, which include TaG Junior, Junior Clone and Cadet. Senior classes are TaG and 125cc Shifter. The 125cc shifter class in Bermuda is essentially an open motor class that is populated mostly by ICC or KZ engines. 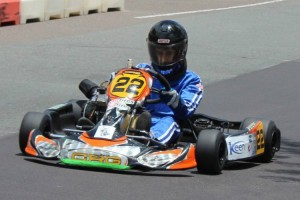 The season ending exhibition race in Hamilton went perfectly as the club showed just what karting is all about to the local community. With three rounds of practice to start the weekend, drivers spent their time learning the tight and tricky 11-turn, half-mile track that cut through the city of Hamilton. After practice, each class had two rounds of heat races, followed by a third round Sunday morning to set the starting grid for the main events.

In the TaG class, Scott Barnes dominated as he won two of three heat races, and ran away to the feature win Sunday. Arguably one of the most competitive and easily the most exciting classes of the weekend was the Junior Clone class. With a field made up of six young drivers, it was anyone’s race throughout the weekend. Lucas Bridges was on the move in the heat races slicing his way through the field, but it was ultimately Zavier Smith who would survive a wild feature race. TaG Junior race saw Owen DecCosta scoring the win, while D’Nico Durrant won the Cadet race.

The final race of the day was the 125cc shifter class with an amazingly close battle that featured all of the island’s best shifter drivers. Shannon Caisey would lead the field to the green flag in the pole position alongside Barnes, but it wasn’t long until two-time heat race winner Brandon Franks stole the lead and checked out. Behind Franks was Caisey while Rian Lindo completed the podium. 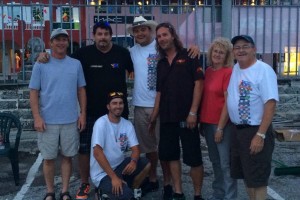 The American contingent during their trip to Bermuda

Several American’s were on hand at the 2014 Keen Ltd Grand Prix in Hamilton. Karting veteran and tuning mastermind Greg Bell of Leading Edge Motorsports flew in to assist Brandon Franks to his 125cc shifter victory. Joining Bell under Franks’ tent was Steve Eady. Working for Barnes’ two karts during the weekend was Minnesota’s Chris Enderline. Joining the American tuners in Bermuda were Terry and Shirley Riggins of Indiana, as they ran the timing and scoring system for the weekend’s race.

The Bermuda Karting Club continues to grow each year in popularity and stability, and the club’s board members look to build on the success of this year’s Keen Ltd Grand Prix. Upon seeing photos, videos and talking to those involved in the race, many Americans are already making plans to attend the race. Texas Lone Star Grand Prix promoter Rob Miller has already begun making plans to organize a shipping container to transport karts from Florida to Bermuda for drivers interested in competing in the 2015 Keen Ltd Grand Prix.