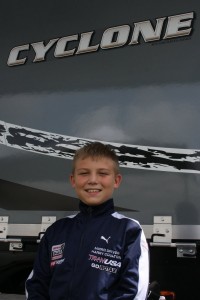 Rising karting star Harry Coulton is primed for another successful season in 2014. The former Micro Max standout is prepared for a rookie season campaign in the Mini Max division, focused on performing his best at the major Rotax Max Challenge events in the United States this year. Coming off a successful three weekend performance at the Florida Winter Tour, Coulton has signed Heartland Recreational Vehicles as a sponsor for the 2014 season.

Harry is excited about the new opportunity and to help expand the Heartland Recreational Vehicles name and the Cyclone brand. “I would like to thank Heartland and Cyclone for their support in 2014. Signing sponsorship is a big part of our plan to help me keep racing at the top level. Without help from our sponsors and partners, none of this would be possible.”

Heartland Recreational Vehicles is among the largest manufacturers of fifth wheels in the world with a commitment to customer service. The Elkhart, Indiana-based company has established a dealer network of over 400 locations across the United States and Canada. The Cyclone brand comes in 13 different models, ranging from 28 feet to 44 feet long, including all the industry leading design and amenities you can find with all Heartland Recreational Vehicles.

Coley Brady, VP of Heartland Recreational Vehicles, is excited about the new deal with Coulton. “Heartland and the Cyclone Brand is happy to partner with Harry and we look forward to seeing him grow as a racing driver.”

Harry’s mechanic and father Andrew is proud of the success thus far, “Many people think of the sport as Go Karting and imagine kids at a fun fair or toy track, while not realizing that karting is where professional racing starts. Kids work hard to race at this level with families getting behind them 100%, and thankfully sponsorship helps to offset some of the costs. This will also help in the development as a race car driver, as he hopes to move up the race ladder into other forms of motorsports.”

The 2014 season is the first year competing in the Mini Max division after a successful Micro Max career campaign. Coulton was ranked first in the eKartingNews.com Rotax Driver Rankings in 2012, finishing second in 2013. Last year was capped off by a runner-up finish at the Rotax Pan American Challenge at the NOLA Motorsports Park facility. Harry has also won the North Florida Rotax Max Challenge and South Florida Rotax Max Challenge titles while holding the championship lead in three different regional programs simultaneously. Coulton is focused on becoming a serious contender for the Mini Max United States Rotax Max Challenge title, with the Cold Stone US Grand Nationals to be held on July 15-20 at the Miller Motorsports Park in Tooele, Utah.

The Florida Winter Tour was the first challenge for Harry this season, and the 11-year old driver finished the six-race championship third in the Mini Max standings, top among the American drivers in the field. Since entering the national karting scene four years ago, Harry has proven himself as one of the most consistent drivers in the country.

Harry would also like to thank MRP Motorsport/Birel America, AM Engines, along with his family and friends for their support in the past and for the 2014 season. For more information, visit www.harrycoulton.com or email info@harrycoulton.com for sponsorship opportunities.

About Harry Coulton:
A passion to excel and natural talent on his side, Harry Coulton is on his way to becoming a motorsports star. Since driving a battery-powered vehicle before his third birthday, the Florida driver jumped into competitive karting at the age of five. Since, it’s been climbing the ladder with success at the World Karting Association and the Florida Winter Tour. In 2012, Coulton finished third at the United States Rotax Max Challenge Grand Nationals in the Micro Max division, finishing the year #1 in the eKartingNews.com Rotax Driver Rankings through excellent results in regional programs while earning vice-champion honors at the Florida Winter Tour. The 2013 season was highlighted by a second-place finish at the Rotax Pan American Challenge event. Coulton is moving up to the Mini Max division in 2014, looking for more success and gaining more knowledge as he works up the motorsports ladder system.