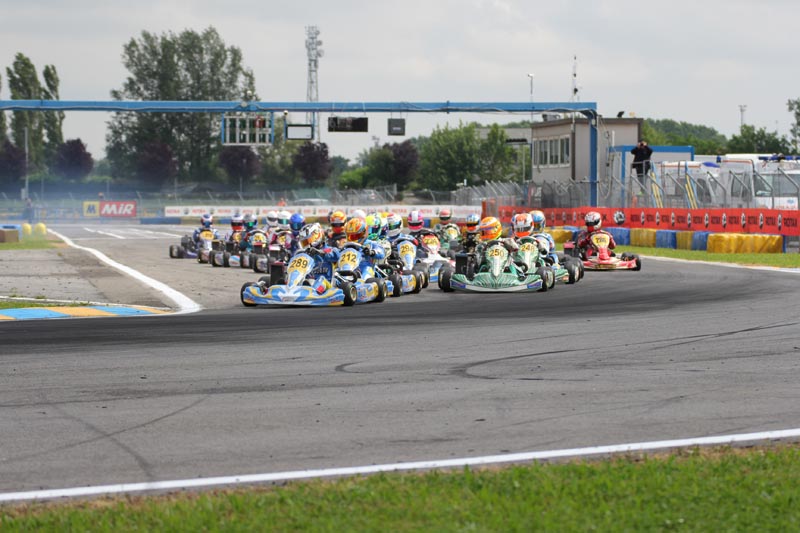 From May 26th to June 1st the ROTAX MAX Euro Challenge headed for Italy. Europe’s most popular ROTAX karting series held its second round of the season at Castelletto Di Branduzzo on the beautiful circuit of “7 Laghi”.

“Following 2013, Castelletto marked our second stop at 7 Laghi in a row. Since the manufacturer’s engagement in the Euro Challenge is growing more and more, it is a matter of course to race in Italy, representing the sporting and economical home of kart racing”, says Roland Geidel, CEO of the organising RGMMC Establishment, who welcomed over 170 drivers from 37 nations on the 1.256 metres long track close to Milan.

The second stop of the ROTAX MAX Euro Challenge proved to be really heated in an ambiguous meaning. Hot summer weather made up for perfect conditions, challenging the drivers to beat the heat and their opponents likewise. Several days of testing, qualifying sessions, 22 heats and second chance races led to the decisive final day, filtering out the 102 finalists. In the end three names stood out of the pack, dominating the weekend in their categories. 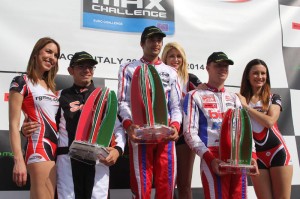 DD2: Paolo De Conto wins on home soil
A tight qualifying practice was reserved for the DD2 drivers, in which the first of two groups brought up the pacemakers. Quicker than anyone was Paolo De Conto (KMS – Birel Motorsport). By a time of 48.046 seconds the Italian local hero took the poleposition ahead of the ROTAX Winter Cup winner Sean Babington (Strawberry Racing) who was insignificantly slower. In third position Frenchman Anthony Abbasse (Sodikart) kept in touch with the top, which applied to Jordan Lennox Lamb (CRG SpA) in fourth place. Paolo De Conto dominated the heats of the gearbox category as well. After winning each of his three heats, Birel’s spearhead gained his second pole-position after Genk. Behind him Sean Babington was in good shape. Accumulating two wins and a second place, he proved to be the runner-up in the ranking thus putting Jordan Lennox Lamb, Andreas Backman (Strawberry Racing) and championship leader Ben Cooper (KMS – Birel Motorsport) in chasing roles for the upcoming finals.

In the prefinal Paolo De Conto did a brilliant start. Only Sean Babington was able to keep in touch with the leader for the halftime of the race. Towards the end the gap got bigger and the Italian celebrated a save victory in front of Babington. Behind the leaders Michael E Christensen (RS Competition) from Denmark kept hold of the third position. But this was only a flash in the pan since he had to give way to Jordan Lennox Lamb, Ben Cooper, Andreas Backman and Anthony Abbasse. The latter made his way up through the grid as he picked up the race from place 15 due to an electric problem in the heats.

No change on the top in the DD2 final: Again Paolo De Conto did not show any weakness and complemented a dominant weekend by another victory on home soil. Behind the Italian it was Sean Babington again who followed in the Italian’s slipstream. But as the race approached the halftime Babington lost performance and ground. So it were Abbasse and Cooper seizing their chances one after another, pushing Babington back to fourth place. In the end Abbasse took a deserved second place ahead of Cooper who thereby defended the championship lead.

One of the most astonishing results was reserved for the DD2 Masters category. In the qualifying practice Cristiano Morgado (Dan Holland Racing) from South Africa took the sixth fastest time in the overall grid thus being undoubtedly the best driver of the Masters classification. In the heats the multiple Grand Finals winner did not show any weakness, too. He felt quite comfortable in the front of the grid and underlined his skills by an amazing eighth place in the heat ranking, which in the end was far in front of his next opponent Martin Pierce (Praga Racing Team) who shaped up the classification in 33rd position, being the only other Masters-driver who managed the qualification for the finals. Consequently one would have expected a further walkthrough for Cristiano Morgado in the finals. But in the first race he was without luck and got involved in a collision, which forced him to retire. So Martin Pierce inherited the prefinal win and repeated that success in the final, too. Cristiano Morgado took the second place ahead of Christophe Adams (Sonic Racing Kart), whose weekend had already ended with ninth position in the second chance heat. 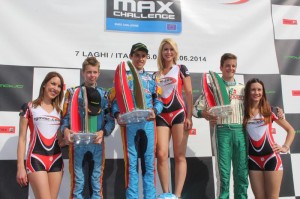 Junior: Thomas Preining takes fourth win in a row
In the junior category the Austrian Thomas Preining (Team TKP) tied in with his latest success at Genk. The opening round winner set the pace in the qualifying session, being the only one managing a time of 49 seconds. Even more remarkable was the fact that his best time was over one tenth of a second quicker than the one of the second placed Marcus Armstrong (Dan Holland Racing) from New Zealand. That applied to the chasers Max Timmermans (Strawberry Racing) from Belgium and Dean MacDonald (Strawberry Racing) from the UK who complemented the following positions.

After setting the best time in Friday’s qualifying Thomas Preining was the man to be beaten in the heats – however no one managed to. Preining had a clean record, winning all of his heats thus gaining the pole-position for the prefinal on Sunday. His hardest opponent proved to be Max Timmermans. He took two wins, which boosted him into the first starting row. In the third place of the ranking Marcus Armstrong from New Zealand asserted himself after winning the last heat. Spain’s Mauricio van der Laan (Intrepid Driver Program) completed the top four positions. Actually Dean MacDonald did a good job. He finished third in each of his heats but a jump start penalty threw him back to 13th place in the ranking.

In the prefinal Thomas Preining’s dominance kept unbroken. He defended his lead, which throughout the race distance was never in danger. Behind the start-finish winner, his teammate Luc Willemse (Team TKP) was driving on a save second position until the chasers caught up during the last laps. Some exciting change of positions finally boosted Dutchman Richard Veschoor (Team TKP) onto the second place – an amazing show after he had picked up the race from twelfth position. That applied to Leonard Hoogenboom (Dan Holland Racing) in third place and Dean MacDonald (Strawberry Racing) in fourth position. Willemse had to be satisfied with place five in the end, still being in front of Max Timmermans who damaged his kart during the start and crossed the finish line sixth.

In the final Preining complemented a perfect weekend, again driving in a sphere of his own. He took a secure win with a gap of more than one second ahead of his teammate Richard Veschoor on a secure second place. As for the third position Leonard Hoogenboom and Max Timmermans showed a breath-taking fight. They changed positions numerous times until a photo finish stated Timmermans third by 0.020 seconds only. 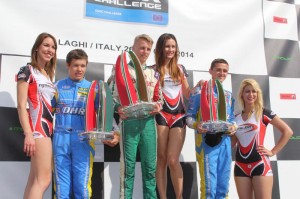 Senior: Successful comeback for Harry Webb
As usual the seniors showed a highly balanced competition, giving a foretaste in Friday’s qualifying. After adding the three qualifying groups, the front-runners of each session were finally the ones arranging the pole-position among themselves. In the end it was the reigning European junior champion Guan Yu Zhou (Strawberry Racing) from the UK setting the benchmark by 48.927 seconds. Right behind him his fellow countryman Harry Webb (Strawberry Racing) gave an awesome comeback in the Euro Challenge. He was only 0.031 seconds slower than his teammate and asserted himself in second position. Brett Ward (Dan Holland Racing) missed to break the magical barrier of 49 seconds closely but was fast enough to gain the third place in the ranking. Behind him the opening round winner Joseph Reilly (Strawberry Racing) and Edward Brand (Intrepid Driver Program) completed the top five positions of the 63 drivers comprising grid, in which not less than 53 pilots were separated by a gap of only one second.

In the heat races on Saturday Harry Webb set the benchmark. The former junior Champion was victorious in all of his heats. By four wins he boosted himself onto the pole-position. Although it might sound like an easy job, the decision was far closer. Especially his teammates Guan Yu Zhou and Joseph Reilly gave him a hard time as they took the bulk of the remaining heat wins. Finally Zhou established himself in second position ahead of Reilly, which in all meant a triple lead for the team of Strawberry Racing in the ranking. Best supporting role was played by Edward Brand (Intrepid Driver Program) who managed the fourth place in the end. The only race, which did not go to a Strawberry-driver saw Pierce Lehane (Dan Holland Racing) from the UK in first place and granted him the fourth place in the grid of Sunday’s prefinal.

Surprisingly calm was the senior prefinal. The top three Strawberry-drivers Harry Webb, Guan Yu Zhou and Joseph Reilly kept a ceasefire for the whole race distance and saw the chequered flag in the mentioned order. Close behind the trio Pierce Lehane took the fourth place just ahead of his teammate Brett Ward and Edward Brand.

After a less spectacular prefinal, the last race turned out to be just the opposite. Although Harry Webb set the pace undoubtedly again and finally took another unchallenged win, his teammates Reilly and Zhou quarrelled for the podium positions. Just for the halftime both collided and dramatically lost all chances for a top result. The other drivers moved up and aimed for the podium. Finally it was Tom Grice (Coles Racing) who crossed the finish line in second place. Yet a time penalty for leaving the corridor at the start, threw him back to sixth place. So Pierce Lehane and Brett Ward were the lucky ones who stepped onto the podium at last.

Now the ROTAX MAX Euro Challenge is already watching out for its next round. At Zuera (ESP) one will approach the halftime race of the year from 14th to 20th July. The summer race under the burning sun of Spain promises to be the hottest of the season. So stay tuned on the official website www.rotaxmaxeurochallenge.com or rgmmcmedia.com, where you get all information regarding reports, photos, results and live TV stream.