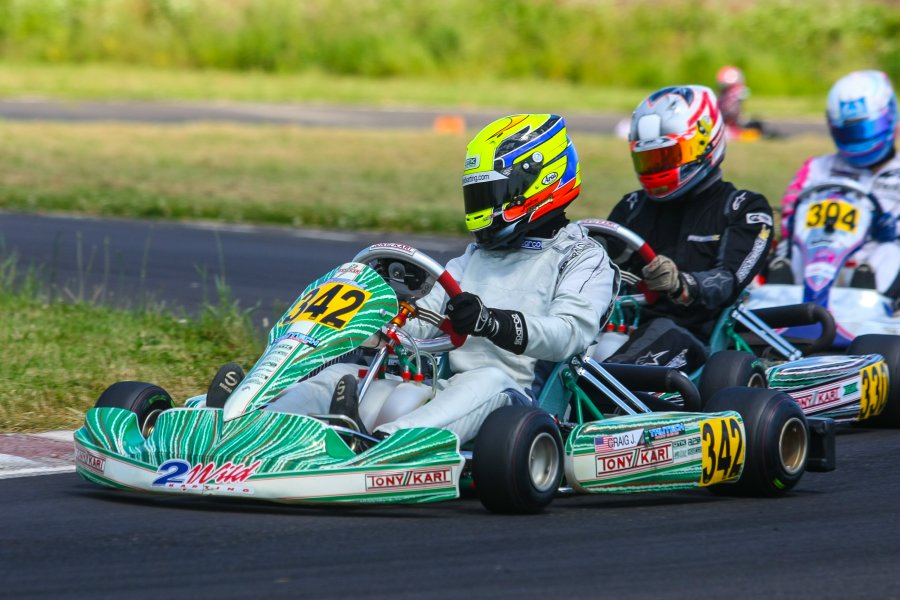 The Rotax Can-Am ProKart Challenge continued its 2014 season at the McMinnville Kart Track. The northwestern Oregon facility welcomed teams and drivers from the United States and Canada for the second stop of the series. A total of 80 entries each day took part in the Rotax Max Challenge and Superkarts! USA categories around the 6/10-mile course that everyone calls the ‘Mac Track’. Picture perfect weather allowed for all in attendance to enjoy the weekend at the race track, with the championship chase picture taking shape at the halfway point of the season.

California driver Jake Craig became the inaugural champion in last year’s Black Flag Racing Senior Max class. Senior rookie Luke Selliken shut him and the rest of the field out at the opening weekend in Richland. This time at McMinnville, Craig doubled up to put himself back in the championship chase. Canadian Bryce Choquer set the tone for the weekend, escaping the opening qualifying session with the fast lap of 40.581 seconds for the Prefinal pole position. Selliken was second with former Team Canada member Zacharie Scalzo making his series debut in third. Choquer and Scalzo went 1-2 in the Prefinal as Selliken dropped to fourth behind Craig, who started the 15-lap race in sixth. The top four shuffled up the order at the start of the Final, with Scalzo coming away with the lead. He led the first 12 laps until Craig drove his way into the lead after dropping to fourth at the start. From there, he established a 1.8-second advantage to secure his first main event victory of the season. Choquer advanced to second after Scalzo crossed the line second but was given a 10-second penalty for jumping the start. That promoted Selliken to the podium in third, moving 2010 US Rotax Grand Nationals winner Stepanova Nekeel to fourth and Artie Carpenter fifth. 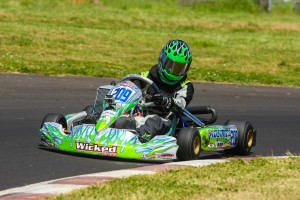 Craig opened up Round Four on Sunday with determination, edging out Kyle Byers for the pole position by a slim three hundredths of a second. After giving up the lead to Choquer on a wild opening lap that also dropped Byers back to seventh, Craig reassumed the lead and led the remaining laps for the Prefinal win. Choquer was a close second with Selliken third and Byers back up to fourth. The order remained unchanged in the main event as Craig showed the way all 20 laps for his second victory of the weekend. Choquer and Selliken completed the podium with Byers in fourth and Geoffery Roberti in fifth.

The opening weekend in the Wicked Fabrication Junior Max class at Richland saw a clean sweep by 2014 Team USA member Austin Versteeg. It was nearly another sweep in McMinnville, this time by Kyle Wick. The Washington driver dominated Saturday’s action, opening up with the fast time in qualifying with a 41.330-second lap. Canadian Ryan Martin was second with Toni Breidinger from California in third. Wick went flag-to-flag in the Prefinal while Martin had to come from the back of the 17-driver grid after his engine would not fire initially once the class took to the track. That allowed 2013 series Mini Max champion Sting Ray Robb and Versteeg to claim second and third in the race. Wick never felt the pressure in the Final, getting away early and driving away to a four-second advantage for his first victory of the season. Versteeg and Robb completed the podium with sisters Toni and Annie Breidinger completing the top-five.

Wick was at the top of the order when Sunday’s round of racing began. Another solid lap in qualifying secured him the top spot of the order over Versteeg and Robb. Versteeg was able to get the jump on Wick at the start of the Prefinal, and that was all it took to end the weekend sweep for the Washington driver. Wick ended up second behind Utah’s Versteeg with Robb holding third. Versteeg appeared to have the main event in his grasp, leading for much of the race. Wick stayed locked on his bumper, waiting for the opportune moment. The last lap was when Wick struck, securing the lead on the final circuit and holding it to the checkered flag for his second victory of the weekend. Versteeg had to settle for runner-up with Ryan Martin driving to his first podium finish in the series after Robb retired early. Stevie Pugsley Jr. and Spencer Kunz secured their first top-five finishes in the series. 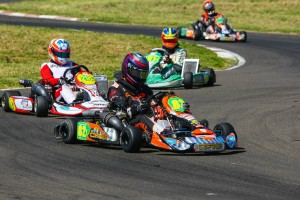 Kory Estell came away with the win in S2 Semi-Pro on Sunday (Photo: SeanBuur.com)

The Superkarts! USA Can-Am ProKart Challenge championship began at the McMinnville weekend after a warm-up event was provided to the Stock Moto drivers in Richland. This weekend saw two different winners in the S2 Semi-Pro Stock Moto class with just one driver leading the way in the six-driver S4 Master Stock Moto field. Marco Eakins swept the opening round in S2, but not without a challenge. Eakins led the entire Final after securing the fast lap in qualifying and the Prefinal win. Estell kept it close throughout the 20 laps, and nearly pulled off stealing the victory at the line. Eakins squeaked out the win by just 86 thousandths of a second with Justin Walsh completed podium. Sunday began much like the previous day, as Eakins was at the top of the order and cruising out front in the Prefinal. Estell was able to get the holeshot to begin the main event, and that was all he needed. The Washington driver pulled out to a one-second advantage after 20 laps to even the score in the win column. Eakins was runner-up with Walsh once again in third. Johnston was dominant over the weekend in S4, sweeping the action. The margin of victory on Saturday was 10 seconds and 16 seconds on Sunday. The battle for second was fantastic all weekend long with series newcomer Randy Word runner-up both days with Tyler Shepard placing third each main event.

Conner Wick gave his family a third win on the weekend, coming home first during Round Three action of the Monster X Tour Mini Max division. Wick edged out Canadian Marco Kacic by just 38 thousandths of a second for the fast time in qualifying. He led all but one lap of the Prefinal, but still came away with the win after challenge from opening weekend winners Edward Portz and Jacob Blue Hudson. Portz came just 53 thousandths short of stealing the race win. The Final was Austin Torgerson’s turn to put up a fight, stealing the lead from Wick for three laps. Wick was too strong, holding on until the checkered flag for his first series victory. Torgerson was runner-up with Kacic back to third. Enrique Jaime was fourth with Portz back to fifth. The racing intensified on Sunday with the order shuffled around in qualifying. Enrique Jaime secured his first fast lap honor in qualifying, quicker than Wick by 56 thousandths. The two went back and forth for the lead in the Prefinal until lap seven when contact was made. That sent Jaime back outside the top-five and Wick fighting to hold onto the lead. Preston Anderson came away with the lead on the final circuit for his first checkered flag in Mini Max with Wick second. He would be penalized five seconds for the contact, promoting Enrique up to second after he fought his way forward in the closing laps. After early jostling for the lead, Jaime retained the top spot in the main event. He led the final 10 laps to earn the provisional victory, until he was removed in technical inspection. That promoted Portz to the top of the podium with Wick second and Torgerson third. Kacic ended up fourth with Anderson capping off a solid weekend in fifth. 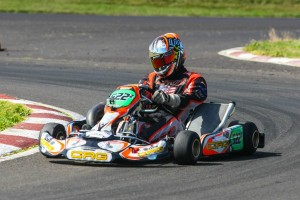 The GoKart Hero Micro Max category saw three different drivers at the top of the order to open up the weekend at McMinnville. Ryan Dezall was the quickest in qualifying, while the Prefinal win went to Jonathan Portz after a photo finish with Josh Pierson. The two were separated by just 11 thousandths at the line, with Cooper Becklin and Dezall crossing the line for third at the exact same time just a half second behind. Portz and Pierson went back and fourth again in the Final, this time crossing the line at the exact same time according to the timing system. Portz, along with third place finisher Becklin were removed from the results after tech. That gave Pierson his third straight victory in the season, and put Dezall and Ashton Torgerson on the podium. Becklin bounced back the following day to lead the class in qualifying, clocking in a quicker time just ahead of Pierson. The top qualifier fought back to win the Prefinal after Pierson demoted him out of the lead. Neither would be able to claim the victory in the Final as Max Wright came from fifth in the order to lead only the final circuit and secure the top spot at the checkered flag. Pierson was runner-up with Becklin in third.

The LO206 program enjoyed larger fields at the second stop of the Can-Am series, with three new drivers in the Senior category while the Junior division expanded to six. Max Mulkey was the top driver in the MVP LO206 Senior class. Missing out in the opening qualifying session, Mulkey led the remaining sessions of the weekend. He won the first main event by just a tenth over Richland double winner Bryan Green with Greg Normandin just three tenths back. The finish was just as close on Sunday, with Mulkey edging out Green once again. Both RLV LO206 Junior Finals were won by Tyler Besuyen. Richland double winner Jacob Gulick was the top qualifier to begin Round Three, scoring the win in Heat #1. Justin DeMars was first in Heat #2, with Besuyen scoring the victory in the main event over Gulick and DeMars. Besuyen was the top driver in qualifying and Heat #1 on Sunday, with DeMars once again claiming the win in the second heat race. Besuyen was just a little bit quicker then the field in the Final, scoring his second win over Gulick and DeMars. 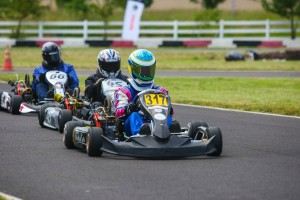 The battles were close in LO206 Senior with Max Mulkey coming away the victor (Photo: SeanBuur.com)

Just two drivers swept the weekend in their respective categories as 2009 US Rotax Grand Nationals champion Mike Daniel and 2013 series champ Derek Wang left McMinnville with near perfect scores. Wang added wins three and four on the year, besting Ben Johnston both days in the DD2 Masters division. Daniel made his 2014 Rolison Performance Group Masters Max debut, sweeping the on-track sessions. Chad Wallace ran second Saturday, stealing the fast lap honors. California driver John Breidinger was runner-up on Sunday. DD2 was split by point leader John Buzza and Colorado pilot Sabré Cook. Buzza swept the action on Saturday and was the top driver in qualifying and Prefinal on Sunday. Cook was able to beat Buzza to the checkered flag on Sunday in her Can-Am debut weekend.

The Can-Am series gave away set of Mojo and MG Tires during the podium ceremonies following the action at the McMinnville Kart Track. Hard charger awards were also handed out in the Senior and Junior Max divisions. McKay Snow and Spencer Kunz won those honors on Saturday with Michael Gutenberger and Steve Pugsley on Sunday. Each was provided a specialized hat. More prizes and special awards will be coming at the final two events of the season.

The series returns to action in a month as the United States birthday weekend will play host to the third stop of the Rotax Can-Am ProKart Challenge. Racers will spend the Fourth of July weekend at the historic Pat’s Acres Racing Complex in Canby, Oregon. Visit rotaxcanamprokartchallenge.com and be sure to follow the series on Facebook as the 2014 Rotax Can-Am ProKart Challenge continues.