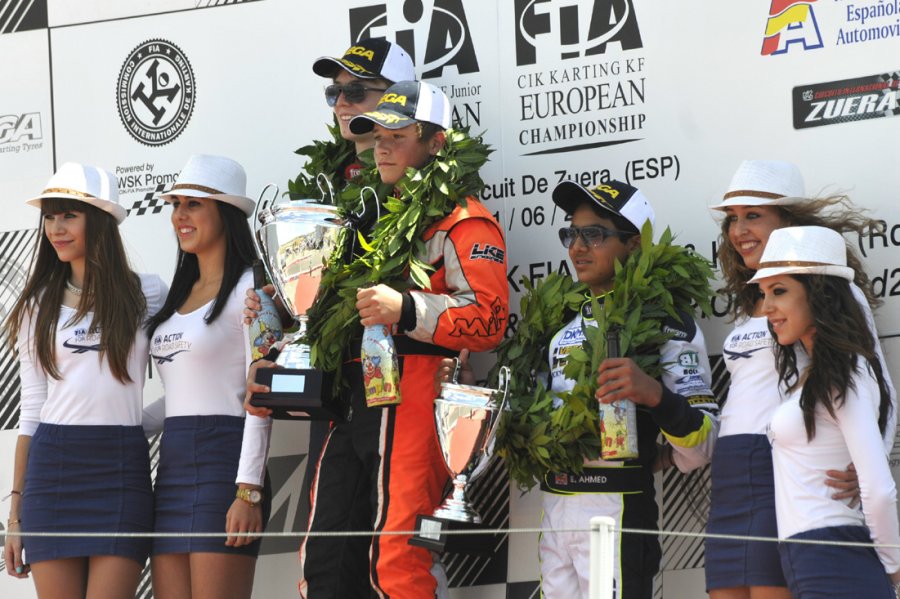 Everybody expected that the round of Zuera would leave its mark on the European CIK-FIA KF and KFJ Championship standings. The second weekend of the season, at the circuit near Saragoza, had only this certainty: the rest of the event was characterised by a high level of uncertainty which affected all the phases of the round, from qualifying until the last laps of the two Finals. The results recorded in the heats were contradicted by the Prefinals: the Danish Nicklas Nielsen (Kosmic-Vortex-Dunlop) had the upper hand in KF today, after the Italian Felice Tiene (CRG-TM-Dunlop) dominated yesterday. In KFJ, on the other hand, the Swedish Anton Haaga (Kosmic-LKE-Vega), the new name of the category, was at the top again, even though after his victory in the Prefinal, he had to fight hard to keep at bay his opponents’ counterattack in the Final. Genk (Belgium) is the next appointment: the third round is on schedule in two weeks’ time. The Championship will arrive in Belgium with standings which are very different from those determined by the season opener in Muro Leccese (Italy) at the beginning of May. The European CIK-FIA championship has already achieved also a second and very important result here in Zuera: many new talents are emerging and are climbing up the standings, ready to battle for great achievements during what remains of the season.

Joyner back to victory lane in KF
Last time he stepped on top of the podium was in 2013, in Bahrain, when he won the KF world title: the British Tom Joyner (Zanardi-Parilla-Dunlop), here in Zuera, finally managed to win again, but only after a heated battle. He found the way to success only at half race in the KF Final: only then, in fact, Joyner managed to get ahead of opponents such as  Felice Tiene, Nicklas Nielsen and, eventually, of the Finnish Niko Kari (Tony Kart-Vortex-Dunlop), who had been in the lead up to then. The race was thrilling also for the other top positions, especially when the Italian Alessio Lorandi (Tony Kart-TM-Dunlop) accomplished his recovery from the fifth row and attacked the third position occupied by the English Lando Norris (FA Kart-Vortex-Dunlop). The Final finished with Joyner first followed by Nielsen and Lorandi, while Kari was fourth just ahead of Norris. The championship standings reflects this uncertainty: Nielsen and Norris lead with 44 points, followed by Kari with 42 and then by three drivers –  Joyner, Ilott and  Tiene – with  37 points. 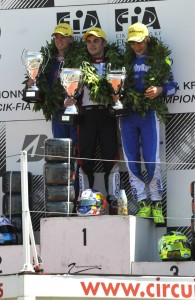 Haaga fights and wins in KFJ
The KFJ Final began with the English Daniel Ticktum (Zanardi-Parilla-Vega) in the lead. Then, Anton Haaga gained the head of the race for few laps, until Ticktum overtook him and had to deal with the German Mick Junior (Tony Kart-Vortex-Vega), who was in the lead for a very short time at half race. In the meantime, Haaga dropped back to fourth place, but he managed to close the gap and to conquer a leadership which he kept until the end of the race: they were the most heated phases of the whole weekend, which was as uncertain as ever. The final podium proves it: behind Haaga – winner – and Ticktum – the runner-up – the third place was scored by the English Enaam Ahmed (FA Kart-Vortex-Vega), who accomplished a great recovery from the 9th row on the starting grid. So, the Londoner is back on top of the championship, swapping places with Devlin Defrancesco (Tony Kart-Vortex-Vega) again. The American finished fifth today, just behind the Russian Artem Petrov ((DR-TM-Vega). Haaga is third in the standing, ahead of the American Logan Sargeant (FA Kart-Vortex-Vega) and Ticktum.