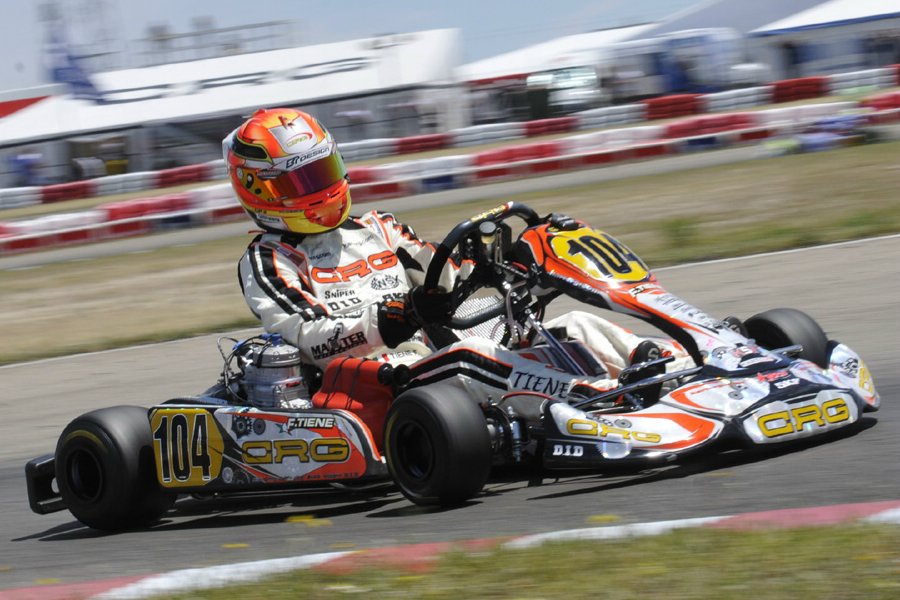 Close quarters combat for the top positions in Zuera: the race is getting more and more spectacular while the event is approaching its final phase. Twenty qualifying heats were not enough to get a clear idea about the drivers who stand the best chance to aim at victory in the two categories of the European CIK-FIA KF and KFJ Championship. Drivers are participating in the second round of the event, hosted by the Spanish circuit; the performance put in by the top drivers of the current standings and the dark horses in today’s heats are not very different. They are separated by very narrow gaps: the drivers who managed to win the heats today showed it all. Many new names joined the long list of the favourites. The current standings of the championship, determined by summing up all the penalties at the end of the heats, have already changed after the first point have been  awarded. Tomorrow morning, the KF and KFJ drivers will fill the slots of the Prefinals starting grids according to today’s standings. After the Finals, eventually, we will know the names of the winners of the Spanish round.

Felice Tiene is closing the gap in KF
Felice Tiene (CRG-TM-Dunlop) arrived at the circuit of Zuera in great shape: he won three heats out of four and is eager to close the gap in the championship. The driver from Neaples grabbed the pole position of tomorrow’s Prefinal, beating into second position his most dangerous rival, the Finnish Niko Kari (Tony Kart-Vortex-Dunlop). The latter won two heats and will start next to Tiene. However, the second row will be occupied by two strong drivers such as the Danish Nicklas Nielsen (Kosmic-Vortex-Dunlop) and the English Lando Norris (FA Kart-Vortex-Dunlop),  both winners twice. Karol Basz (Tony Kart-Vortex-Dunlop) was not as lucky: the Polish achieved victory once but got slowed down in one of the other heats: he will start from the sixth row. Some troubles also for Callum Ilott (Zanardi-Parilla-Dunlop), who will start from the fourth row but keeps the current leadership in the championship. Among the drivers who are in close pursuit of the English driver there is Tiene, who took a great step forward today: now he is fourth behind Norris and Kari.

Gli appuntamenti  in video
Tomorrow the live streaming on www.cikfia.tv and www.cikfiachampionship.com, starting from the drivers’ parade. On Rai Sport 2, the delayed broadcast of the Finals next week, then  the special report from Zuera.