Victories for Aluminos During Month of May

Success continues for the Aluminos brand as it nears the one-year anniversary. Securing a victory at the Superkarts! USA SummerNationals last season in its national stage debut, the Aluminos chassis was at the top of the podium in Las Vegas for the SKUSA SuperNationals thanks to New Zealand driver Matthew Hamilton. The Kiwi driver returned to the United States, helping Aluminos complete the tri-fecta, earning a win at the SKUSA SpringNationals event at the Dallas Karting Complex. The entire Aluminos squad showed speed throughout the May 2-4 weekend in Caddo Mills, Texas, setting up for another solid SKUSA Pro Tour campaign in 2014. Later during the month of May, the Aluminos brand earned two more checkered flags at the recent Red Line Oil Karting Championship event in Sonoma, California.

Hamilton, visiting the Texas facility for the first time, got up to speed quickly and was in the hunt for S4 Master Stock Moto glory during the opening round on Saturday. Winning the second heat race gave the Aluminos driver the pole position for the main event. After fighting early for the lead position and escaping trouble with lap traffic, the Kiwi driver survived and conquered the race to earn Aluminos chassis its first SpringNationals victory. Hamilton came back on Sunday as the driver to beat after just missing out on the top spot in qualifying. He drove his Aluminos Rio chassis to the win in both heat races while recording the fast lap of the races in the process. The opening lap of the main event did not favor Hamilton, as he slipped back to fifth. Trying to find his way forward quickly, some contact was made and Hamilton received the worse of the action. He spun off into the barriers and was unable to continue. While recording a DNF, the New Zealander is second in the championship standings with ground to make up at the SummerNationals in August. 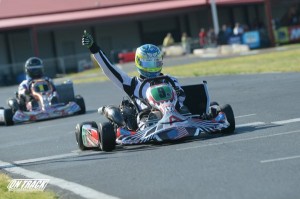 Fritz Leesmann has returned to the Aluminos operation for the 2014 season, focused on performing at his best in the S1 Pro Stock Moto division. The two-time Pro Tour champion was among the front-runners the previous weekend at the Texas ProKart Challenge, but the Pro Tour weekend started out sour. A 10th in the qualifying session set up for work to be done for the native NorCal driver. Gaining two positions in the opening heat race, Leesmann secured another for the start of the main event. He advanced his Aluminos Sonoma chassis as high as fourth in the competitive S1 field, settling into the fifth position. A better qualifying effort Sunday put the Aluminos driver sixth in the order, advancing to fifth in the opening heat race. He slipped back to seventh in Heat #2, managing to take over sixth early in the main event and hold the position, running lap times similar to that of the leaders throughout the 16-lap event.

Fernando Diaz made a strong return to the Pro Tour in the S4 Master Stock Moto division. The 2010 G1 Pro Tour champion had an excellent run Saturday, nearly reaching the podium. Diaz improved his position through the heat races to end up sixth on the grid for the main event. His Aluminos chassis continued to get quicker as the race wore on, coming just inches away from the third spot at the checkered flag. A DNF in Heat #2 place Diaz 31st on the grid for the feature race. He put the Aluminos machine forward throughout the 16-lap race, climbing up to the eighth position, securing the fourth position in the championship chase. Italian driver Gian Cavaciuti contested his first SpringNationals aboard an Aluminos RS1 chassis, driving to a fourth place in Sunday’s main event, recording the fast lap in the process. PP Mastro made his Aluminos debut at the Pro Tour, struggling with contact throughout the weekend and other issues that kept him from recording results the veteran racer and the Aluminos chassis is capable of.

Cory Milne joined Leesmann in the S1 division, recording two top-15 results as he opened up his sophomore season on the Pro Tour. Will Preston, after performing well at the regional level, made his SpringNationals debut in the S2 Semi-Pro category. Starting the Saturday main event outside the top-20, he was nearly up into the top-10 before ending up with a 15th place result. Sunday was repeat in the making, as Preston piloted his Aluminos chassis near the top-10 until he was run over on the final lap by another competitor, putting him out of the race. 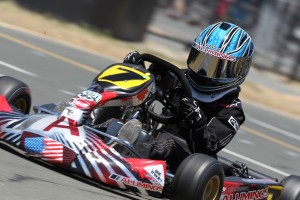 The third round of the Red Line Oil Karting Championship took place over the May 24-25 weekend at the Simraceway Performance Karting Center with two wins added to the Aluminos total. Daniel De La Calle secured another victory in the Pro Stock Honda class for Aluminos, earning his second straight aboard the Aluminos Sonoma kart. Grant Langon scored his first win of the season in the competitive Micro Max division, showcasing the Aluminos Cadet chassis. Billy Smith stood on the podium in the Rotax Masters category, piloting an Aluminos Estoril chassis to third. Multi-time Sonoma race winner Jim Inglebright joined the Aluminos squad to finish second in the Stock Honda Master division, giving the Aluminos chassis four podiums on the weekend. Solid performances were put in by Hunter Pickett and Grayson Browne, placing inside the top-five of the Pro Stock Honda class. Jason Pettit ran seventh in Rotax Junior, with Milas Mills fifth in Rotax Senior. Ethan and Hailey Tavares joined Langon in the Micro Max division, earning fourth and 11th place results respectively.

Aluminos will return to the Sonoma facility for Round Four action on June 14-15. The recent announcement of Aluminos Denver has the operation preparing for a busy summer supporting customers at the numerous Colorado facilities. Arrive and Drive opportunities are also available for the Superkarts! USA Pro Tour SummerNationals at the Modesto Grand Prix on August 1-3.

About Aluminos:
Started as a manufacturing and distribution company specializing in kart racing specific products, the Danville, CA based operation created its racing team toward the end of the 2007 season. Led by Rob Soares, Aluminos has put together the essential pieces to help groom drivers of any age to reach their personal goals. Driver coaches Tom Dyer and Fritz Leesmann – both successful karters – teamed with their in-house Stock Moto program led by engine guru George Tavares, the Aluminos Trackside Support and Arrive & Drive program is above any other outfit in the country. The team also produces its own chassis line, the Aluminos.  Find out more at www.aluminos.com and the new www.shopaluminos.com for new and used products on-sale from the respected operation.