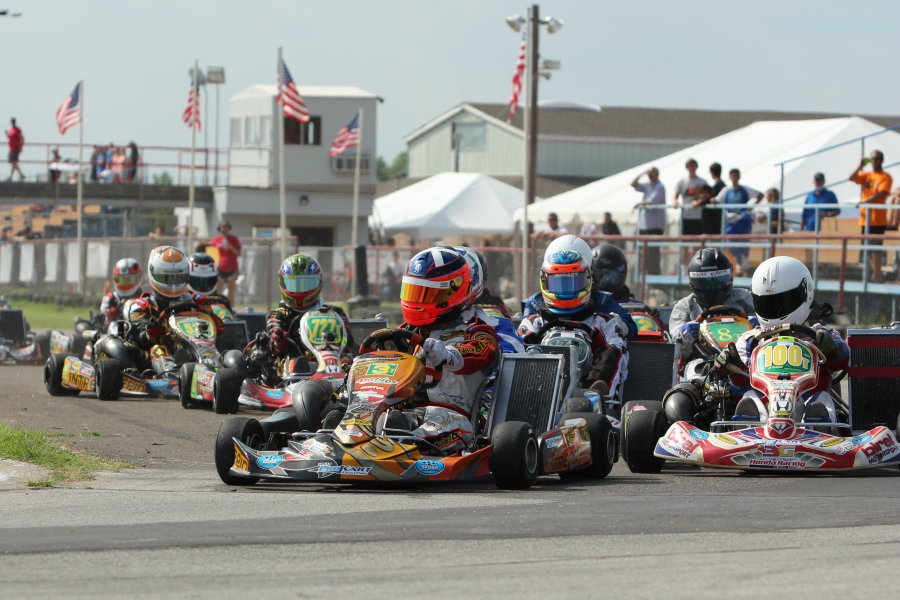 Riding off the momentum of the largest event in series history, the Texas ProKart Challenge – presented by 3G Kart Racing/Burger King®/Chase Racing/Dallas Karting Complex/Fernelius Alvarez Attorneys – will journey to the second stop of the 2014 season. The Oklahoma Motorsports Complex in Norman, Oklahoma is set to host Round Three and Four of the regional series on June 7-8. The Superkarts! USA and United States Rotax Max Challenge program will complete the first half of the year, shaping up the point chases for the over $30,000 in cash and prizes set to be awarded on the season, including $4,000 on the weekend.

The end of April kicked off the series at the Dallas Karting Complex, welcoming roughly 200 drivers on the weekend to make it the biggest Texas PKC event in the three year history. Many of those drivers attended to warm-up for the Superkarts! USA Pro Tour SpringNationals the following weekend. Texas ProKart Challenge regulars shined against some of the toughest competition from around the country, positioning themselves for a run at the year-end titles.

Colorado driver Christian Schureman and Texas driver Ryan Kinnear split the wins at the DKC event in the Champion Racing/Intrepid S1 Pro Stock Moto category. Kinnear, the S2 champ in 2013, will look to extend his point lead over series regulars Garrett Boone and returning former champ Jake French. Three of the top-five in the Pole Position/DR Kart S2 Semi-Pro Stock Moto division call the Texas PKC home. Miguel Lopez and Luke Shanahan hold the top two positions, separated by just 10 points. Shanahan was runner-up in both main events, with Lopez opening up the season with a victory. Alex Tartaglia, a two-class Rotax champion in 2013, sits just 40 points out of first, with many others still in the hunt as the season continues.

The same names are at the top of the order in HPD/Honda S4 Master Stock Moto class. 2013 champion Chris Jennings won Round Two to hold the point lead over Steve McCaffery. Defending Pro Tour champion Jordon Musser won Round One, but did not finish the second main event of the weekend and finds himself trailing Jennings by 50 points going to Oklahoma. The RPM Race Karts S3 Novice Stock Moto division welcomed six drivers in Dallas, with AJ Hayes winning both days to set up as the leader in the title chase. Joshua Smith and Kyle Counts currently trail, each earning a runner-up finish in the feature races. Patricio O’Ward was dominant in his return to karting, sweeping the main event wins in the SwedeTech Racing Engines S5 Junior Stock Moto category. He leads the standings by 50 points over Raul Guzman with Jacob Loomis sitting third.

A new class within a class has been created for the Texas ProKart Challenge. The S4 Master Stock Moto Over 40 has been added to run within the regular S4 class, providing a chance for the elder drivers in the category to race for awards. A minimum of six entries will be needed to recognize it as a championship division. Email dpauly@texasprokartchallenge.com for more information.

The Burger King® Rotax Max Challenge – as part of the United States Rotax Max Challenge – saw large numbers as well with ‘Rotaxians’ earning the first two punches toward qualifying for the Rotax Max Challenge Cold Stone US Grand Nationals set for July 17-20 at the Miller Motorsports Park. Conner Ford doubled up in the Gaddy Web Design Rotax Senior division. Round One was a perfect sweep, with Ford coming back to the Prefinal and Final victory on Sunday. Senior rookie Jesse Woodyard trails in the standings by 78 points with Thomas Beaudoin and Bradley Smith just behind. It was a near perfect score for Patricio O’Ward in the Enertech Rotax Junior class. Missing out on the fast time in Saturday’s qualifying session, he went on to lead the remaining sessions of the weekend. Parker Chase and Luis Alfonso Perez Pena are the current top challengers. The Dallas Karting Complex DD2 division has Ricardo Gonzalez leading the standings despite both main events won by four-time US Rotax Grand Nationals champion Jordon Musser. The two are separated by just five points, with Nathan Mauel trailing. Ten drivers took part in the Dallas Karting Complex DD2 Masters class as Dan Lubin and Lance Lehrman split the victories. Lubin holds the point lead over Lehrman by 80 points.

Alejandro Jaramillo went winless last season in the Chase Racing Mini Max division, opening up the 2014 season with a win. Florida driver Lachlan DeFrancesco scored the Round One win, with Jaramillo winning on Sunday. He is the top regional driver in the standings as Sebastian Alvarez trails by just nine points. Jak Crawford was near perfect in the Ribtect Micro Max class and leads the standings. Sunday qualifying was the only blemish for the Texas driver, who holds a 100-point advantage over Branyon Tiner. Tommy Vieth is the point leader in the 3G Kart Racing Rotax Masters category.

Pre-entry registration for the Oklahoma Motorsports Complex event ends Sunday night, June 1. Head to the Texas ProKart Challenge Registration page to sign up for either Superkarts! USA or United States Rotax Max Challenge categories to take advantage of the early signup deals. Official practice begins Friday, June 6 with Round Three scheduled for Saturday and Round Four on Sunday. Each day of competition will include a warm-up session, followed by qualifying, two heat races and a main event.