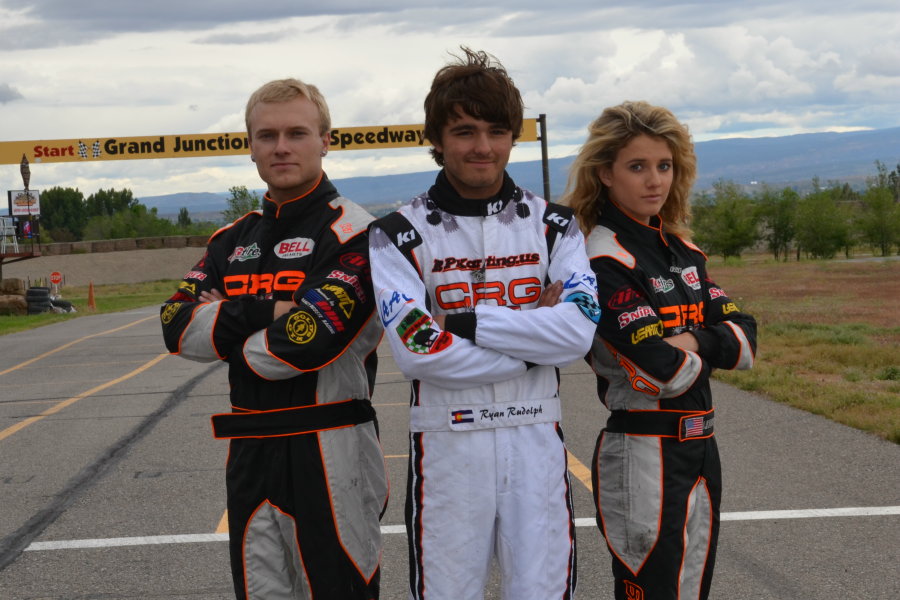 Round Two winner Tase Flores (left) and Round One winner Lindsay Brewer (right) flank Ryan Rudolph as all three are part of the emerging young crop of drivers in the S2 Semi-Pro category (Photo: Chrissy Anzlovar)

The 2014 Superkarts! USA Rocky Mountain ProKart Challenge opened up this past weekend (May 24-25) at the Grand Junction Motor Speedway in western Colorado. The series raced under threatening skies on Sunday after picturesque weather on day one of racing Saturday. Race director Terry Bybee declared Round Two a wet race, instructing teams that it was their choice what tire – rain or slicks – that they would race on. Thankfully, the rain held off to allow all the main events to be contested on a dry track. Racing over the Memorial Day weekend, everyone at the facility was grateful for all of those in the armed services – past, present, and future – remembering all of the brave men and women who sacrifice their lives defending the United States, and allowing them the freedom to spend the weekend at the race track. The racing was plenty exciting despite the field sizes being less than desired for the first weekend of the season.

S2 Semi-Pro Stock Moto racing was easily the highlight of the weekend, as a strong contingent of Denver area racers made the trek over the Rocky Mountains to take part in the opening weekend of the 2014 season. Round One began with Ryan Rudolph grabbing the pole position in qualifying ahead of Myles Marolt and Lindsay Brewer. The first of the day’s two heat races saw Rudolph elect to start at the back of the field. Tase Flores got a great start from third place and battled with Marolt for the lead. Marolt held Flores off and then had to contend with Brewer. Lindsay advanced up to second prior to the halfway point and secured the lead at the end of the backstretch in the turn five hairpin. Brewer pulled away to a two-second win over Marolt. Heat #2 began with Brewer starting in the third position rather than the first, following a two-position penalty handed out in tech. Rudolph battled with Marolt and Brewer for second place while Flores led the field. Flores lost control of his kart coming through the downhill esses on lap four and spun in front of the field. Rudolph took over the lead and drove to the race win. Drama unfolded in the main event right away with Rudolph having trouble on the grid, and was unable to make the start. Marolt held the lead early in the race, but ultimately fell to Brewer. Lindsay drove away to a two-second win, scoring her first SKUSA regional win. Marolt and Flores completed the podium, with Lauren Stark impressive in her S2 debut race weekend after advancing up from S3 to finish fourth ahead of JP Alonso. 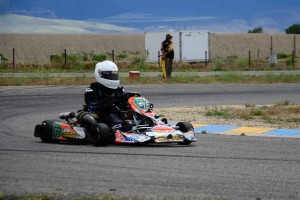 Sunday qualifying took place on a slick track, though the rain had stopped. Flores grabbed the pole position, with Marolt second and Saturday winner Lindsay Brewer third. The track slowly began to dry, setting up for a pair of exciting heat races. Flores drove from his pole position starting spot to lead early in Heat #1 until Marolt took the top spot in the turn 10 hairpin at the halfway point, driving away to the race win. Heat #2 was run on a completely dry track with Flores stealing the lead from Marolt on lap two, driving away to the win. The main event was wild, as Brewer got a great start from the inside of row two and challenged for the lead on the opening lap. Diving to the inside of Flores at the end of the backstretch caused Brewer to slide wide and lose all of her momentum. Flores and the rest of field pulled away as the race one winner slowly caught back up to the pack. Up front, Rudolph and Flores battled for fast lap honors, with Tase edging out Rudolph consistently and pulling away to the Round Two victory. Rudolph ended up in second with Marolt on the podium in third. Alonso ended up with a strong fourth place finish while Brewer recovered to fifth.

The S4 Master Stock Moto category was missing some of its regular competitors this weekend, but still had its share of great racing. Steamboat Springs racer Rob Van Deren won the main event both days to start the year off as the driver to beat. Hugh Templeman made his S4 debut this past weekend after several years of Rotax racing. Templeman showcased his rain weather skills Sunday, ending up second both days to Van Deren.

Longtime western slope racer Bob Rodrick swept the weekend in TaG Masters, while Brandon Southwick traveled from the Denver side to win in TaG Senior. In TaG Cadet, Tristin MacLeod raced uncontested and drove to a perfect weekend. 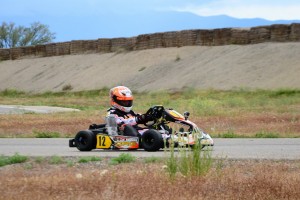 Corbyn Andrews battled all weekend for the Mini Max win, scoring the victory on Saturday, and a second place finish on Sunday (Photo: Chrissy Anzlovar)

The weekend also included United States Rotax Max Challenge categories, with the CRG-USA Colorado Rotax Series hosting two rounds of racing in conjunction with the Rocky Mountain PKC program. Arizona driver Cole Ciraulo and New Mexico’s Corbyn Andrews split the main events in the Mini Max division on the weekend. Ciraulo was the top qualifier for the opening day and finished first in both heat races. Andrews struck in the main event, stealing the lead on the first lap and drove away to a five-second victory over Ciraulo and Max Van Deren. The roles were reversed on Sunday, with Ciraulo coming away with the win. Andrew led the way throughout the day until Ciraulo scored the victory in the main event. Van Deren finished on the podium once again in third. Rayce Dykstra beat Braden Hindson in both rounds of Micro Max racing while Angus Watkins swept the weekend in Rotax Junior.