Why the Yamaha KT100 Classes Remain Not Only Relevant but Growing 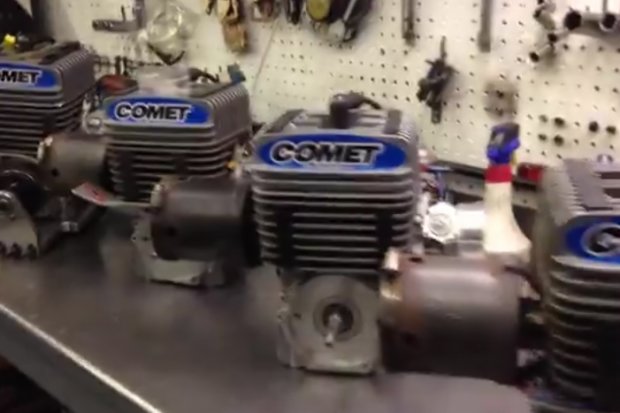 The following is a column provided by Texas Lone Star Grand Prix promoter Robert Miller, who attended the Indianapolis 500 this past Memorial Weekend and had the chance to visit the New Castle Motorsports Park and Comet Kart Sales – just east of downtown Indianapolis.

The Yamaha KT100 engine has been in kart racing for decades.  Motor packages come and go.  Fads emerge and fade.  Racers, by their very nature, immediately begin to push and tweak whatever new engine they take up to grab every last little bit of performance.

This inevitably results in increased costs.  Examples of this are everywhere from the modified moto shifter engines of a few years ago to the current Clone or “Chonda” engines of today. The very high costs of the modified moto engines resulted in a complete retooling of shifterkart racing resulting in the currently very popular “Stock Honda”.  At the budget racer end of the spectrum, the same thing happened with the Clone.  A $90 engine purchased from Harbor Freight has now become a $600+ blue printed motor with aluminum billet flywheel.

This is not intended as criticism.  It is not.

Racers seek maximum performance or they would not be racers.

The renaissance of the KT100 is probably due in large part to a couple major factors:

2) tuning is relatively simple using the 4 hole can.

Some organizations continue to use various pipes with the KT100 but the momentum is toward the 4-hole can because it is easier on clutches and tuning and increases engine longevity.

The American Midwest is, perhaps, seeing the most growth with the Yamaha.  Junior and Senior classes at New Castle Motorsports Park are regularly seeing entries between 20 and 25, with the number gradually increasing.

I was able to spend a little time with Mark Dismore at New Castle Motorsports Park.  Mark raced in the Indy 500 eight times, coming close to winning it on a couple of occasions.  He won an IRL race at Texas and won the 24 Hours of Daytona driving with Dan Gurney.  Mark also competed in the 24 Hours of Le Mans race and has been a life-long kart racer.

Mark talks about his passion for kart racing, why he built a world-class kart racing facility and the beginnings of Comet Kart Racing.

After spending the morning with Mark Dismore at New Castle Motorsports Park, we traveled to Comet Kart Sales where we toured the showroom and shop.  The Dismore family philosophy and that of Comet Kart Sales is affordable family karting.  Racers can purchase a number of brands of new chassis from Comet as well a large inventory of used chassis and race ready karts.  The shop is well stocked with racing suits, helmets and all of the support items that racers need to go racing.

It was when we entered the engine shop that we became immersed in the Comet passion for the Yamaha KT100 engine package.  Full blue printing and machining are part of the day to day operations of the shop. KT100 motors in various stages of assembly are everywhere.

Mark Harrison, foreman of the Comet Racing Engines shop, gave us a tour and then an interview wherein he discusses the virtues of the KT100 motor package and why the KT100 classes are growing.

The take away from these visits and interviews is that in American kart racing, while the shifter and TaG classes are doing well and growing both regionally and nationally, the more affordable KT100 is filling a gap between them and the more budget minded racers who race Clones and LO206s.  The affordability, dependability and horse power of the Yamaha KT 100 continues to inspire a loyal following and attract new devotes.