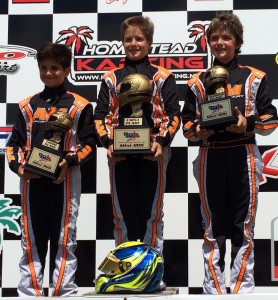 Beginning from his first practice session midday on Friday, ten-year-old Jeremy Fairbairn showed he could drive with the some of the fastest kids in the Rok class. Consistently running top five in a stacked field of twenty plus talented drivers, Fairbairn turned heads in his AM powered Tony Kart. The new Homestead track layout by Rok Cup proved to be challenging for many drivers, while Jeremy was able to draw upon his size and love for technical track configurations to aid him in his pursuit of a podium result.

On Saturday, Fairbairn was able to qualify in the fourth position, only hundredths off of a front row starting spot. Jeremy drove all three-heat races smart, finishing second, third and second without incident in all three races. The talented pilot continued to pick up speed throughout the event and was always able to stay in the lead group, well ahead of the majority of the traffic.

Sunday, with a grid spot on the front row, Jeremy prepared himself for the prefinal while his tuner, Carlos Clemente continued to advance the setup of the AM powered #87 Tony Kart. At the start of the prefinal, Fairbairn once again avoided contact from the inside lane, and found himself back in the third position on the exit of the opening complex of corners. This time, working very quickly to maintain a close distance to the speedy leader, Jeremy passed and found himself in P2 and only a couple of seconds behind. Soon, the determined driver closed the gap and was pushing the leader to a safe distance from the others before attempting to battle and complete a pass in turn four. Jeremy was able to take the lead, and then gave it up again in a back and forth battle. On the final lap, Jeremy passed the Brazilian champion and looked good to finish. Jeremy was driving a defensive line going into the final hairpin and the champ was able to get around him on the exit for a very close victory.

The Florida born driver entered the final race with confidence that he could not only drive with the leader, but that he could beat him. At the start, once again, the inside line jumped and Jeremy was forced to pull back and avoid contact. He got through the first few corners exiting in fourth before quickly dispatching the second and third place drivers. However, this time, the eventual race winner had already built a considerable lead and although Jeremy gapped the rest of the field, he was not near enough to catch the leader.

With this race, only Jeremy’s third in the Mini-Rok class, he managed to continue his forward progress. The young man is looking to take this momentum into his next Rok Cup race in Jacksonville prior to competing in a few of the biggest races in his short racing career. Jeremy will soon join Team Koene USA for the Rotax Summer Shootout where the young determined pilot will continue adding skills that he’ll need to take a run at the Grand National Championship in July.

“My goal is to win a national championship in Micro Max this year, and then focus on moving up to the tough competition in Rotax Mini Max before the 2015 Florida Winter Tour,” expressed Fairbairn. “I am very happy to be joining such a professional and winning team. I hope I can add to their wins this summer.”