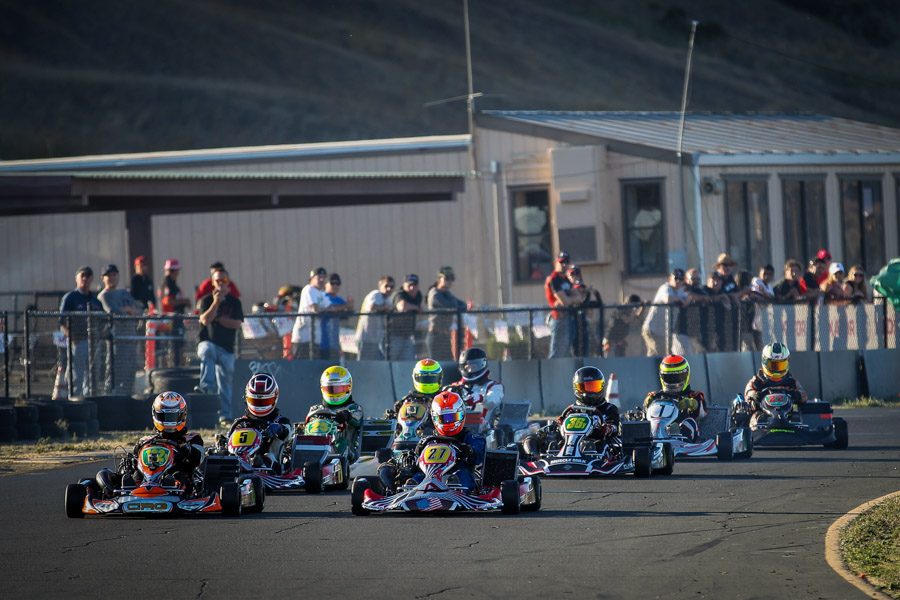 The 2014 California ProKart Challenge resumes in a week and a half (June 6-7), as the series returns to the Simraceway Performance Karting Center. Superkarts! USA racing has been absent from the Sonoma, California facility for a few years, but was prevalent as the site of the NorCal ProKart Challenge series that raced there from 2008 thru 2010, as well as the location for the inaugural SKUSA SpringNationals in 2010. The popular karting circuit has hosted a number of other major events over the years, and will serve as the final permanent course for the California PKC program before it closes out the season with two temporary circuits.

The championship chases in the California ProKart Challenge have reached the halfway point, with a number of titles featuring close battles for the top spot. It’s just 23 points separating the top-three drivers in the Mike Manning Karting TaG Senior category. Veteran Matt Johnson holds the point lead coming off his victory at the last round held on the Adams circuit. Jake Craig is just eight points out of first with Austin Elliott holding third, both recording two podium results thus far. Craig was the Round Two winner, with Elliott not yet earning a win. All have experience and success at Sonoma, and will define the chase toward the championship. Billy Musgrave is looking for a repeat in the Vemme Kart/Extreme Karting S1 Pro Stock Moto championship. Placing second at the opener in Buttonwillow, he’s ripped off two wins to reach the halfway point with a solid lead in the standings. Former series champ Ryon Beachner is the lead challenger, with Peter Abba involved in the chase.

Things are far from being decided in the Leading Edge Motorsports TaG Master category, with the top four well-engaged in a fight. Kevin Manning has yet to win this year, but holds the lead in the standings. East coast racer Chuck Gafrarar earned his first series victory at Adams to advance into the second position, back by 50. Ethan Wilson and Billy Cleavelin each have a win, and remain in the hunt. Darren Elliott is making it tough for the other 2 Wild Karting S4 Master Stock Moto drivers, as he contends for the title with three straight feature wins. The returning SuperNationals winner leads over Rob Logan and Willy Musgrave.

Trey Brown has gone three for three in the Pure Karting TaG Cadet class to secure the top spot in the standings to date. Despite Brown’s perfect score in the feature races, Oliver Calvo remains close behind in the championship chase, needing one solid weekend to close up the gap. The numbers have been strong in the Nash Motorsportz S3 Novice Stock Moto division this year, with five drivers contending for the title chase. Cris Araujo has three runner-up performances in the first half, and holds the point lead over Round Two winner Steve Wetterau and two-time winner Travis Nicklas. The Mother’s Polish S4 Magnum Stock Moto class has Jeff Krogstad at the top of the order, with two-time winner Luke Bianco trailing.

The deadline for online registration for the event is Tuesday, June 3 at midnight at the discounted price of $310 for entry and race tires. Move-in for Round Four of the California ProKart Challenge begins on Thursday, June 5 with specific times to be announced. On Friday, the California PKC registration desk opens at 7:00am, with the official practice day beginning on track at 9:00am, running until 5:00pm.  There will be no charge for overnight camping at the track, space permitting, and there will also be no reserved pit spots – which will go by a first come-first serve basis after class and series sponsors are set up. Complete race and venue information can be found at the California PKC Event Page.