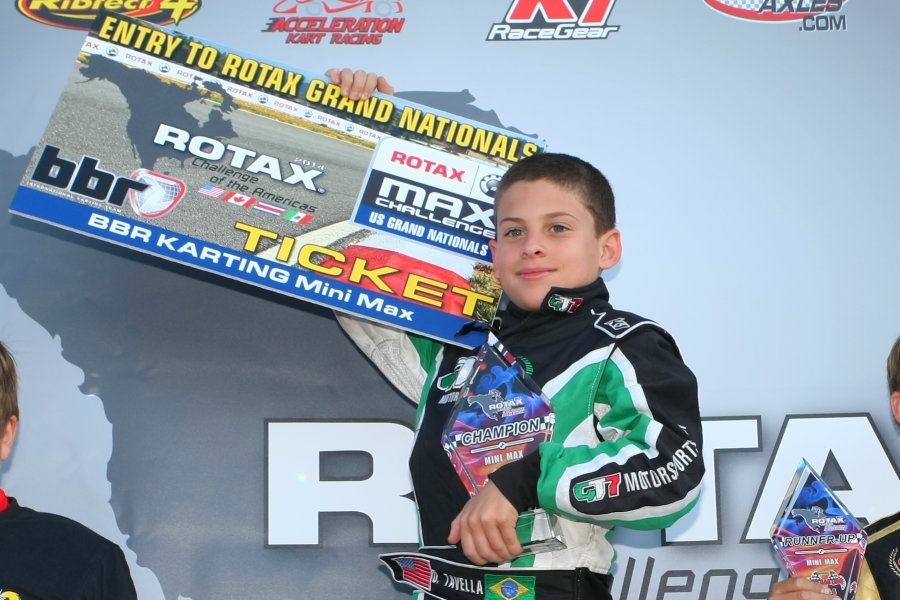 Practice makes perfect, and the number of races young Dylan Tavella has competed in just the last few years has helped to mature the New York driver. Behind the wheel, he’s like a shark in the water, stalking his next prey. Off the track, he’s just another 12-year old enjoying life, day by day. Racing over half his life has helped him become one of the most successful Cadet drivers in recent years, and in April he traveled from coast to coast to have successful back-to-back weekends. The trip included his first Rotax Challenge of the Americas Mini Max championship, and opened up the United States Pro Kart Series with three wins in four races on the weekend.

Tavella entered the Rotax Challenge trailing in the championship standings by 47 points to Jacob Blue Hudson, following a win and two other podium finishes. The New York driver struggled on a very slick track in qualifying, placing eighth in the session. In the Prefinal, Dylan worked his way up to the fourth position, gaining valuable points over Hudson. The 18-lap Final was a textbook performance by Tavella. He worked his way into the on the opening circuit before slotting in behind Sebastian Alvarez. Dylan stayed locked on Alvarez’s bumper until the final circuit when he pulled the trigger. Working the final corner, they drag-raced to the stripe with Tavella winning the photo finish. The win and a disqualification of Hudson gave the provisional championship to Tavella. 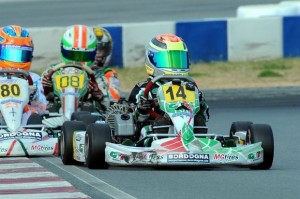 The following day, Tavella’s goal was to stay out of trouble to avoid losing the championship. After qualifying seventh, he only made it five laps before retiring early in the Prefinal for a mechanical issue. Starting 14th in the main event, he was nearly into the top-five before contact dropped him down the order. Dylan fought back to end up 10th and secure the championship by 53 points over Trey Brown.

Tavella returned to the track the following weekend for the opening event of the United States Pro Kart Series. The weekend was a double-duty one, contesting the new Mini Rok Cadet and the Yamaha Cadet divisions. Opening day of action was a successful one for Dylan, coming away with victories in both divisions. He became the first top qualifier ever in the Mini Rok division, winning both heat races and the main event to sweep the day’s action. The Yamaha win was a challenge, coming up from 17th in qualifying to third in the first heat. After dropping outside the top-five in heat two, Tavella came back to run in the lead group of the main event. A last lap pass in turn eight secured the lead and the victory to give him two on the day.

Sunday provided two more chances for Tavella to stand on top of the podium. His Mini Rok sweep came to an end in qualifying, placing third in the order. He bounced right back to the lead in Heat #1, leading all eight laps and matching the result in Heat #2. Tavella proved too strong, fighting off a handful of drivers in the main event to secure his third win of the weekend. In Yamaha, Tavella was sixth after qualifying but remained in the hunt all day. A third in Heat #1 led to a win in Heat #2. With the pole position for the main event, he snuck away from the field briefly before he was run down by a group of drivers. They put on an amazing race to the checkered flag, which ended in a photo finish. The drivers fought strong to the stripe, with Tavella holding on to finish second.

Tavella has a full summer schedule set up, following the entire USPKS program, in addition to the Rotax Summer Shootout and United States Grand Nationals at the Miller Motorsports Park. Dylan is also contesting the Superkarts! USA Pro Tour SummerNationals in northern California at the Modesto Grand Prix. 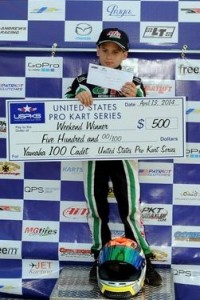 Chassis: Tony Kart
Engine/Engine Builder: Charlie Swayne/Iron Rock Motors
Sponsors: GT7 Motorsport, Iron Rock Motorsports, Diversified Private Wealth, Argyle Jewelers, Philip Joseph Jewelers, K1 RaceGear
Series You Compete In: United States Pro Kart Series, Superkarts! USA, United States Rotax Max Challenge
Years Karting: 6.5
How did you get started in karting? Dad put me in a kid kart and I loved it
What has been the high point in your racing career? Winning the Rotax Grand Finals invitational (Micro Max)
What are your goals in racing? I would love to race open wheel
In a few words, how would you describe your driving style? Relaxed, patient, clean, wait for other drivers to make a mistake.
Funniest moment at the race track? My dad trying to race me on the track (I won)

What do you do when not at the track? School and more school
What are your goals outside of karting? All my goals involve some type of racing
What type of street car do you drive? N/A
What type of street car would you like to drive? Koenigsegg One
What are your pet peeves or things that irritate you? Kids that don’t know how to drive and come to national events
What do you think could be done to improve the sport of karting? Slower starts, less practice time for national races
What are your favorite aspects about the sport of karting? I got to race in 18 different states across America, spending time with my family and friends