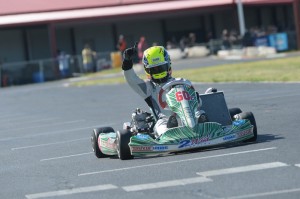 Jake Craig has been a fixture at the front of the field through out 2014 (Photo: On Track Promotions)

After signing successful driver Jake Craig to their ranks, team 2Wild Karting of Laguna Hills, California moved to kick off their first quarter of the 2014 season. Attending numerous races and keeping up with series on the West Coast and beyond made for a busy start to the year. The 2Wild Karting drivers saw great results throughout their travels and show the determination, backed up by an experienced race team, to continue their success through the finish of the 2014 season.

Standing out among other drivers in his classes, Jake Craig really made a mark in his first few months with the squad. In the Rotax Senior, TaG Senior and S2 classes he competed in, he would more often than not be seen standing on top of the podium while other drivers dominated in their classes from Kid Kart to S1. The team attended races such as the Rotax Challenge of the Americas (CoA), CanAm ProKart Challenge (CanAm) and SoCal Regional Challenge, the SuperKarts! USA (SKUSA) ProKart Challenge and Pro Tour, and the local Los Angeles Karting Championship (LAKC).

2Wild Karting would attend all three weekends of Rotax’s CoA, in January, February and April. The team would see podiums in Senior Rotax by Jake Craig each round. The final weekend of CoA saw Craig working Saturday’s main event from dead last, moving slowly up to second place, and securing the win on the final corner, making for a very exciting race to close the CoA program in 2014.

Against a more local crowd, 2Wild Karting saw success from multiple drivers in the competitive Senior Rotax class and in Kid Kart. The first weekend, at CalSpeed Karting in Fontana, California, saw a near podium sweep by 2Wild drivers. In first place stood Jake Craig, followed by Carlee Taylor in second, while Eric Molinatti nearly completed the podium, earning a close fourth place. Round two at CalSpeed, just this past weekend, saw Jake Craig once again on the podium in Senior in second place, with Molinatti in third. Driver Zang O’Shaughnessy finished with a fourth place in the youngest class in the series, Honda Kid Kart.

In the very competitive SKUSA ProKart Regional series and even more competitive Pro Tour, Jake Craig continued his domination for 2Wild Karting. Each weekend at the ProKart series would see him on the podium in not only TaG Senior but in S2 as well. Also, Ryon Beachner would find success and stand on the podium in S1 in rounds two and three, bringing home third and second place finishes. In TaG Senior, driver Andrick Zeen would drive to a third place finish in round three of competition. The SKUSA Pro Tour SpringNationals at the Dallas Karting Complex saw Jake Craig with a double win for 2Wild Karting. Against some very tough competition, Craig pulled through both days and made his team proud.

“Winning both days at SpringNationals was huge for me,” expressed Craig. “I couldn’t have done it without an amazing team standing behind me. I’m so lucky to have their support through all these races.”

Back at the local level, 2Wild Karting saw success at the close-to-home Los Angeles Karting Championship races. In TaG Senior, the first two rounds saw Eric Molinatti in first place, followed by Carlee Taylor in third during round two competition. Round three saw Molinatti still on the podium, but this time in second place. The diverse team also saw S5 Junior Shifter driver Nicky Hays winning in each round, and PRD Senior driver Robby Stanovich with a third place finish in round three.

With drivers on top in many different classes, 2Wild Karting proves to be one of California’s most successful and experienced race teams. Dedicated to customer service and doing everything and anything in their reach to help their drivers succeed has been the base of 2Wild’s business since it’s conception in 1996. With the success they have been seeing so far in 2014, 2Wild Karting will continue to attend races on the West Coast and beyond, and look to continue building on the results they’ve already seen.

For more information on 2Wild Karting, please visit them online at www.2WildKarting.com or contact them by phone at 949.206.9906.

For information on press releases or other media services offered by Race Tech Development, please contact Mike Maurini via e-mail at Info@RaceTechDevelopment.com or 317.270.8723. Race Tech

Development can also be found on Twitter at @RaceTechDvlp as well as Facebook at their Race Tech Development Fan Page.