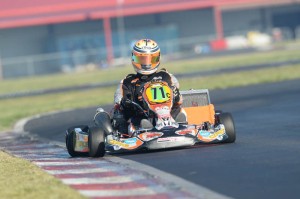 The 2014 Superkarts! USA Pro Tour opened up during the May 2-4 weekend at the Dallas Karting Complex in Caddo Mills, Texas. The CRG-USA race team was on hand, supporting 23 drivers including a solid international driver roster that contested the record-breaking SKUSA SpringNationals. A large CRG contingent was on hand, thanks to the growing CRG-USA dealership network, including powerhouse California dealer MRC, Denver’s Billett Performance Karting, along with Texas-based RPM Race Karts and Core Karting. A number of drivers put in their best performance to date in their respective categories at the Pro Tour. Among those were podium finishers Darren Elliott, placing first in S4 on Sunday, and Billy Cleavelin standing on the podium steps both days for TaG Master.

Victory came at the hands of returning veteran Darren Elliott. A longtime CRG pilot, the former SKUSA front-runner made his debut in the S4 Master Stock Moto division running under CRG-USA dealer Musgrave Racing Company (MRC). Elliott was at or near the front of the field all weekend, placing top-five in every on-track session. Sunday was Darren’s time to shine, running third throughout the two heat races. A great start put him into the lead for one lap before settling into second for the majority of the feature race. Taking advantage of lap traffic, Elliott made his move for the lead with two laps remaining. The California driver held on to score his first SKUSA Pro Tour race win in over 10 years. Roy Montgomery recorded a top-10 finish for CRG-USA on Saturday, placing ninth with Tim Ulmen 12th on Sunday for his best result on the weekend. 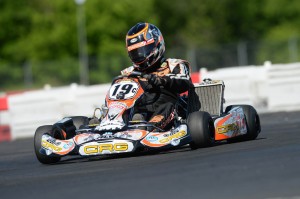 Veteran Billy Cleavelin gave CRG-USA its first two podiums in the TaG Master division at the Pro Tour. The California driver joined the operation for the first time, running the new CRG Blackstar X2 chassis. Throughout the weekend, Cleavelin was among the quickest drivers in the category, securing the fast time in Saturday’s qualifying session. Battling with engine issues during the heat races, Cleavelin fought back in the Saturday main event to score the third position. The two-time SKUSA SuperNationals winner posted fast time in Sunday’s qualifying session, and was the driver to beat until more engine problems struck in the heat race. Fighting back, Cleavelin worked his way up to the runner-up spot, nearly pulling off a drive to the win to complete his best Pro Tour weekend.

Two CRG-USA drivers bagged their personal best results in the competitive S2 Semi-Pro Stock Moto category, featuring 37 drivers. Lindsey Brewer entered her second season in the class, while Ryan Rudolph is preparing for his first full season on the Pro Tour after a brief S2 rookie campaign last year. Brewer improved on her 20th qualifying effort to advance her position through the two heat races to sit 13th going into the main event. She would gain four more, ending the feature ninth for her first ever top-10 result at the Pro Tour. Rudolph – piloting a Billet Performance Karting CRG – stormed at the start of the main event after two DNFs in the heat races. A great start propelled him into the top-15 on the opening circuit, coupled with a fast CRG kart put him into the top-10 quickly. He advanced up to the seventh position to complete an amazing drive from 30th on the grid. They returned Sunday to lead the CRG-USA squad once again qualifying second in the tough S2 field. Heat race crashes would however have Rudolph placing just one spot away from another top-10 finish with Brewer ending up 19th. 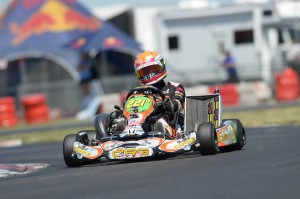 Lindsay Brewer recorded her best finish in the S2 division, advancing up to ninth for her first top-10 result (Photo: On Track Promotions – otp.ca)

CRG-USA fielded five drivers in the headline S1 Pro Stock Moto category, featuring CRG factory driver Davide Forѐ. The five-time world karting champion recorded a pair of fourth place finishes in the main events on the weekend. It was the first time the Italian competed in the Stock Moto class, working with CRG-USA’s power partner Darcy DeCoste Racing Engines (DDR). Forѐ recorded a heat win Saturday, but came just one position short each day of the podium in what was a record high field of drivers. US veteran Ron White made a triumphant return to the Pro Tour ranks, racing within the top-10 all weekend. He earned a respectable seventh on Saturday and followed it up with 11th on Sunday. The weekend was not exceptionally well for defending Pro Tour champion Joey Wimsett. Quick in qualifying, he was plague by mechanical issues throughout the weekend. Suffering a bent steering shaft in Saturday, he clawed to a ninth place result and held on Sunday with a flat right front tire to place 13th. Sabré Cook and Alec Gumpfer experienced their own issues throughout the weekend. Cook was blistering fast all weekend with times consistently in the top-5 as she stormed up to as high as third in Saturday’s heat races. Unfortunately contact at the start in Saturday’s main event and a broken ignition wire Sunday in the feature race ended her chances of a podium finish.

The operation is set to field a great team with even more drivers for the second stop of the Superkarts! USA Pro Tour, the SKUSA SummerNationals at the Modesto Grand Prix on August 1-3 in northern California. Up next is the opening weekend of the Rocky Mountain ProKart Challenge, set for May 23-25 at the Grand Junction Motor Speedway. 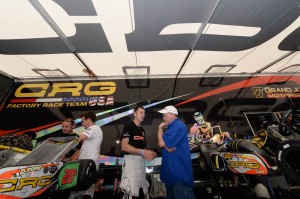 CRG-USA is primed for an outstanding season and future, with great opportunities for drivers to be part of the growing race team or businesses looking to promote the world-championship CRG brand as part of the dealer network. Anyone interested in joining the team should contact Stacey Cook at 855.TEAMCRG or via email stacey@crg-usa.com. Be sure to watch for the newly designed www.crg-usa.com and ‘Like’ them on Facebook.

About CRG-USA:
Located at the Grand Junction Motors Speedway in Colorado, CRG-USA is the newest importer for the CRG chassis brand. In only their second year of operation, they became the #2 CRG distributor in the world for 2013.  Operated by Stacey Cook, the company will focus their distribution and marketing on the western and central portion of the United States. In addition, the operation is fielding a national race team program through the 2014 season at all the major karting events on the year. If you want to race with the best product in karting, jump on board with CRG-USA today. Contact us today at stacey@crg-usa.com or phone 855-TEAMCRG (832-6274).