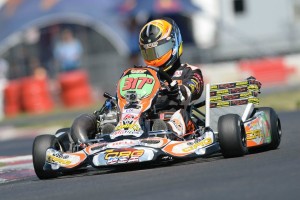 Sabré Cook earned two podium finishes at the Texas ProKart Challenge, only to run into bad luck at the SKUSA SpringNationals (Photo: On Track Promotions – otp.ca)

American karting star Sabré Cook has continued to exemplify her drive and determination, never giving up at the early signs of adversity. That side of her personality shows every time the helmet goes on, and she sits down in her CRG-USA machine. The most recent was during the two weekend trip to the Dallas Karting Complex for the opening rounds of the Superkarts! USA Pro Tour and the fifth annual SKUSA SpringNationals on May 2-4. The Colorado driver never gave up, pushing herself and her machine to the limits, only to have a string of bad luck continue to haunt  her through the first third of the 2014 season.

Sabré spent the first weekend at the Texas facility, taking part in the opening event of the Texas ProKart Challenge with her CRG-USA race team on April 25-27. Cook overcame contact in the heat races to provide two stellar drives through the field to land on the podium each day. Saturday, she was involved in an early wreck during Heat #2 of the Saturday round of competition, forcing her to start the feature from 32nd in the combined S1/S2 race group. With lap times equal to the leaders, Cook drove her way up to the sixth position overall and third in the S1 field to land her first podium result of the weekend. The following day after a rainy qualifying session put her third in the class, a mechanical issue forced her into the pits prior to completing a lap in the Prefinal. That set her on the 33rd position of the grid for the main event. Sabre’ sliced her way through the field making pass after pass and to an impressive second place result.

With a weekend of experience at the DKC facility in her pocket, expectations were high for the former S2 Semi-Pro Stock Moto champion. The S1 division welcomed the largest and most competitive field in the five year history of the Pro Tour, with such names as five-time world champion Davide Forѐ, CRG factory driver Jordan Lennox-Lamb and two-time SuperNationals KZ2 winner Anthony Abbasse all fighting for victory. Cook began her bid for podium finishes with a ninth place result in qualifying for Saturday’s round of action. She stormed up to third in the opening laps and eventually finished sixth after Heat #1. Losing one spot in Heat #2, Sabre’ was still in a great position to make a run at a podium finish starting inside row four in the main event. As the lights went out, Cook’s CRG with DDR Engines power hooked up to the track and bolted her forward. Two drivers from the front two rows made contact with one spinning backwards right in front of her. Electing for a run to the outside, she nearly made it through only to make contact with the spinning kart and bending her axle in the process.

“It was really disappointing not to be able to have a chance to make it through the opening corner,” reflected Sabré on the first day of competition at the SpringNationals. “Our CRG-USA machine was improving with every session, as we had to really adjust to the challenging conditions the track presented us with. I was able to keep the leaders within reach all day and thought we had a shot to contend for a podium finish. Knowing the reason we retired early was not my own fault helped push us into Sunday with our heads up high.”

The following day was aimed at redemption and to complete the round with a solid finish toward the front. Unfortunately, the beginning of Sunday’s round was marred with a tough qualifying session. A combination of traffic, hitting the track too late, and set-up issues put her 19th overall in the order. Sabré didn’t look back, moving forward by gaining four positions in the opening heat race, and another five in the second eight-lap race to start ninth in the feature. With the third and fourth fastest times in the two heat races, Cook was primed for a podium finish. Sabré was able to get away from the grid clean for the main event, and began setting her sights on a run toward the top-five early on. Lap five however ended her run early, as a broken coil wire cut the power to her Honda engine.

“I’m beginning to think that me and electricity do not like each other,” Sabré said jokingly after the SpringNationals weekend. “We have had issues like this before, but I don’t understand why they keep happening. The entire CRG-USA crew did an amazing job to help put me in position for a top-five run to cap off the weekend. This only makes me strive for more, as I know the team does. We will keep pushing forward, and continue to find ways to improve little by little.

Sabré will join the CRG-USA team at their home track – Grand Junction Motor Speedway – as the Rocky Mountain ProKart Challenge program gets underway on May 23-25. The Superkarts! USA Pro Tour returns to action on August 1-3 as the SKUSA SummerNationals is set for the Modesto Grand Prix in northern California. Cook also has plans to travel to Europe in October as she will compete at the KZ2 Super Cup Championships in Italy with CRG-USA teammate Joey Wimsett.