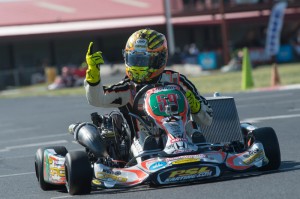 After closing out a successful winter season, Team PSL Karting was seen racking up top finishes at the Superkarts! USA (SKUSA) events at the Dallas Karting Complex (DKC) in the past two weekends. Entering the full SKUSA Pro Tour for the first time, Team PSL Karting showed both their prowess and versatility on the national karting scene. With drivers in the majority of categories, PSL/CRG continued to bring in the top results they are reputed to produce. Taking home the Pro Tour double victory in the headline S1 category, Great Britain’s Jordon Lennox put the PSL/CRG package on top of the podium twice during the prestigious SpringNats event.

“We had considered the doing the Pro Tour last year, and only now we see what we missed,” noted Dominic Labrecque, President of PSL Karting. “The SKUSA team does a great job with their promotion as the event had over 200 entries.”

“We’ve been assembling a small gear-box orientated race team in preparation for SpringNationals, and I feel it’s really paid off,” added PSL Karting’s Race Team Manager, Andrew Campbell. “We definitely have our chassis program sorted out when it comes to sticky tires and 6 gears.”

During their first weekend at DKC for the SKUSA ProKart Challenge, Team PSL Karting brought nine top drivers from around the world to compete. Sebastian Alvarez of Mexico, competed in TaG Cadet and Rotax Mini Max, in which he drove to a third place podium finish on both Saturday and Sunday. Lawson Nagel would finish just behind his teammate in Mini Max both days with a fourth and fifth place finish. In DD2, Nathan Mauel would pull through for a podium both days, placing second and third. Troy Diede, running in the S1 class, picked up a fourth place finish on Saturday, adding to the weekend’s successes. Finally, Patricio O’Ward stood atop the blocks in first place in his S5 division both days to wrap up Team PSL Karting’s great results. 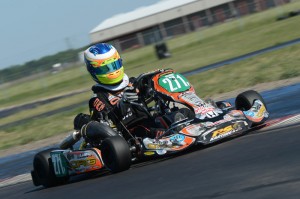 At DKC the very next weekend, Team PSL Karting geared up for the highly anticipated SKUSA SpringNationals. Once again bringing together drivers in almost all divisions, Team PSL Karting worked their way into the tops of each field throughout the race days.

“Swedetech was a huge part of our program, providing top-shelf service for all our clients under the tent,” continued Campbell. “I think the results really showed this.”

Jordon Lennox perhaps had the most success of the weekend for Team PSL Karting running in the S1 division. Against big names in the karting industry, like himself, Lennox pushed for a victory in each day’s main event. Not only did he produce the double win, but he also qualified on pole, and finished in the top-three in each of the weekend’s four heat races. Jordon Lennox certainly topped off PSL Karting’s team success for the weekend at SKUSA Spring Nationals. Moving up from the S2 ranks, Troy Diede would claim 18th on Saturday to start off his Pro Tour efforts in the headline class.

In S5 competition, Luis Forteza had a successful run. With finishing fifth in both Saturday and Sunday’s finals in a competitive field, Forteza continued to fuel Team PSL Karting’s accomplishments for the weekend. 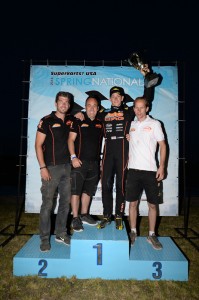 Team PSL Karting continues to strive for the top step of the podium at every race on the schedule
(Photo: On Track Promotions – otp.ca)

Running a Mini Rok engine in the TaG Cadet class, Sebastian Alvarez had a solid Saturday at DKC. Qualifying eleventh, and following up with tenth place finishes in both heat races, Alvarez pushed into sixth in the main event to wrap up a solid day of competition. Sunday’s results showed similar qualifying and heat results, while he got an unfortunate disqualification in the day’s main event. Adding to PSL’s tally, CJ Cramm would nearly miss a top-ten in the potent S2 category, coming home 12th on Saturday against a stout field.

“For me, the entire PSL Race Team really had a great general attitude about the entire (SKUSA) program,” Campbell concluded. “All drivers enjoyed a new challenge (outside of Rotax) with new competitors, engine packages and tires. PSL will definitely be back in full force for the SummerNationals in California.”

As a large and influential team in the world of karting, Team PSL Karting takes pride in the results their drivers produce. Using the highest quality products available and best brains in the industry, they have the means to take any driver to the top of the ranks. With the results they have seen so far this year, PSL/CRG will continue to tour with their team of elite drivers, and look to pursue success at each race.