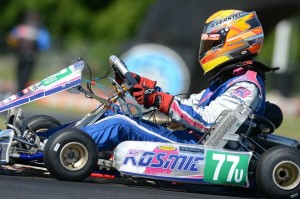 The Rolison Performance Group kicked off their campaign of the 2014 Superkarts! USA Pro Tour this past weekend (May 2-4), contesting the fifth annual SKUSA SpringNationals. Visiting the Dallas Karting Complex in Caddo Mills, Texas, Mike Rolison and his team supported a roster of four talented drivers. RPG’s tent was busy throughout the weekend preparing and fine tuning the team’s karts for some of the most physically demanding conditions seen in recent memory. With an incredible amount of rubber built up on the track, finding the fast way around the circuit was the challenge of the weekend. The team’s effort was highlighted by back-to-back top-five finishes in S5 Junior Stock Moto thanks to Austin Versteeg, while Austin Elliott and Kyle Wick brought home top-10 finishes in TaG Senior and TaG Junior on Sunday.

Austin Versteeg has enjoyed great success since teaming up with the RPG team. Racing in the competitive TaG Junior field in 2013 out of the RPG tent, Versteeg switched things up for 2014 as the recent Rotax Challenge of the Americas champion joined the growing S5 Junior Stock Moto field. The Utah driver made only his second weekend start, having contested the opening event of the Rotax Can-Am ProKart Challenge the previous weekend as his only shifterkart experience. Austin’s weekend began with a solid fifth place qualifying run Saturday morning. The first of the day’s two heat races did not go as planned for Austin, stalling on the starting grid and running 13th after he was restarted. Undeterred by the result of the first heat, Versteeg came out with speed and the strong ability to pass in his new RPG entry. Austin drove back to his fifth position in just eight laps. With an inside row three starting spot for Saturday’s main event, Versteeg finished off his Pro Tour S5 debut advancing one position to finish fourth. Finding even more speed, Versteeg laid down the second fastest lap of the S5 qualifying session, earning him the off-pole starting spot for the first heat race. Austin used the two heat races on Sunday to improve his race craft and learn the nuances of shifter racing as he earned third and fourth place finishes heading in to Sunday’s main event. Showing again how quickly he has taken to the aggressive style of shifterkart racing, Austin drove to an impressive third place finish until officials deemed he had jumped the start, demoting him to fourth in the final standings. The penalty however does not take away the effort put forth by the S5 rookie, earning top-five finishes in his debut. 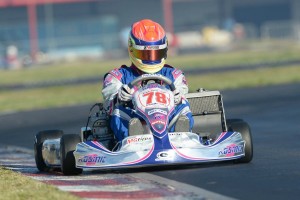 Fighting back in both main events, Austin Elliott drove to top-11 finishes in the competitive TaG Senior division (Photo: On Track Promotions – otp.ca)

California racer Austin Elliott joined forces with the successful RPG operation for the first time as a driver, having worked with the team at other events throughout the season as a mechanic. Elliott’s bid for the TaG Senior Pro Tour championship had quite an up-and-down beginning this past weekend. He began qualifying for Round One in the 20th position Saturday morning, still growing comfortable with the conditions and the Kosmic chassis. Elliott quickly moved up the leaderboard in the first heat, advancing seven positions to 13th. Heat #2 saw more improvement as he gained another spot in the running order to finish 12th. Saturday’s main event began less than favorably for the RPG driver, involved in an opening corner incident that dropped him out of the top-25. Austin proved his grit behind the wheel of his Kosmic chassis, rallying to an extremely impressive 11th place finish. Sunday carried its own new set of challenges. After improving from his 20th place effort from Saturday to 14th on Sunday, Elliott cracked the top-10 in the first heat race, finishing ninth. The second heat race ended about as quickly as it began for Elliott, involved in another incident and forced to retire from the race after taking the green flag. After starting the final from the rear of the field, Elliott was on fire. Avoiding the turn one carnage, the RPG driver went from 32nd to 18th. Elliott’s rapid progression through the field continued throughout the main event, ultimately ending with him passing a total of 23 karts to finish an impressive ninth position. The future bodes well for RPG and Austin Elliott. 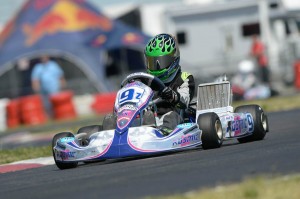 RPG driver Kyle Wick joined the team in Texas where he competed in TaG Junior. Wick had a strong showing going on Saturday as he continually advanced from his 15th place qualifying effort up to a strong 11th place finish in the second heat race. Unfortunately, Wick was involved in an opening lap wreck in the Final and unable to complete the race. Sunday went better for Wick as he looked solid through the heat races, finishing 10th, and then scoring an impressive fourth place run in the second heat. The weekend ended with Wick scoring RPG its fourth top-10 of the weekend with an eighth place finish after getting shuffled back in the opening lap. Kyle showed he has the pace to contend for the podium, and will do so at the SummerNationals.

The RPG tent supported another Utah shifter pilot as Chris Neria contested the highly competitive S4 Master Stock Moto category. Neria has utilized the SKUSA shifter ladder system since he began Superkarts! USA racing, beginning in S3 Novice Stock Moto several years ago, advancing to S2 Semi-Pro Stock Moto and now has moved into the S4 class. Neria spent the weekend searching for balance between too much grip and just enough speed in his MSquared Karting-prepped Tony Kart. After qualifying 28th, Neria improved his standing throughout Saturday, going 22nd in Heat #1 and earning a strong 14th place finish in Heat #2. Chris finished off the day with a respectable 15th place result in his first Pro Tour S4 start. Sunday began strong for Neria, finding speed overnight as he slotted his MSquared Tony Kart 11th on the 36-kart grid. Neria recovered very well finishing 21st in the second heat race, after completing only one lap of the first heat race and finishing 35th. Sunday ended with Neria breaking back in to the top-20 where he would finish the Round Two main in the 17th position. Neria showed in Dallas that he has the speed to race and contend for strong finishes in S4. 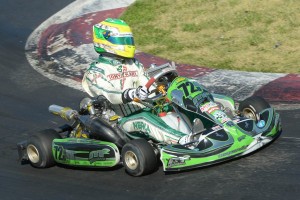 Rolison Performance Group returns home to prepare for the next Rotax Can-Am ProKart Challenge scheduled for the McMinnville Kart Track in northern Oregon on May 30-June 1. RPG is scheduled for another assault on the Superkarts! USA Pro Tour when it resumes on August 1-3 for the SummerNationals at the inaugural Modesto Grand Prix in northern California. RPG is taking requests for Arrive-and-Drive programs or transportation opportunities for each event. For more information on all the services that the Rolison Performance Group has to offer, visit www.rolisonperformancegroup.com or find them on Facebook.