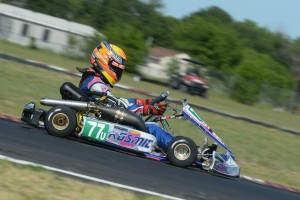 The last two weekends were new experiences for rising American karting star Austin Versteeg, as the Rolison Performance Group driver made the transition to single-speed power to that of a shifterkart. The Utah driver made his debut in the S5 Junior Stock Moto category of the Superkarts! USA program at the Rotax Can-Am ProKart Challenge (April 25-27) before challenging the best in the country at the fifth annual SpringNationals (May 2-4). The 2014 Rotax Challenge of the Americas champion opened up the two weekend journey with a total of four victories, including an event sweep of the Rotax Junior and S5 divisions at the Horn Rapids Kart Track in Richland, Washington. The following weekend capped off the trip with two top-five performances at the Dallas Karting Complex to begin the SKUSA Pro Tour S5 campaign.

Versteeg made his debut aboard a RPG Kosmic S5 machine at the opening event of the Rotax Can-Am ProKart Challenge, visiting the home of the Tri-City Kart Club for the first time. Austin raced against Senior and Master drivers in the combined race group, gaining wheel-to-wheel experience both days aboard the shifterkart. In class, Versteeg was P1 in every on-track session to take home two wins. It was a double-duty weekend, as Austin earned a perfect score over two rounds in the Rotax Junior category to begin the chase toward the series championship.

“It was great to get one weekend under our belts in S5 racing,” stated Versteeg after the Can-Am weekend. “I spent the three days adjusting to shifting while driving, and working on my starts. It was good to get the experience before heading to the Pro Tour event. Our Rotax Junior package was fast all weekend, and it was nice to sweep the weekend to begin the series.”

The following weekend sent Versteeg to the Dallas Karting Complex for the historic 2014 SKUSA SpringNationals. This was the first visit to the Caddo Mills, Texas facility and first weekend competing in the S5 Junior category at the Pro Tour level. Austin began with a solid fifth place qualifying effort to begin Round One, however, a stall on the grid dropped him to the tail of the order in heat one. Versteeg fought back in Heat #2, coming from 13th on the gird to return back to the fifth spot. The main even was one of the most exciting of the weekend, as five drivers were among those in the hunt for the victory, including Austin. Running as high as third, Versteeg settled into the fourth position when the checkered flag wave to record his first top-five in his S5 debut.

Versteeg, his engineer Brian Fletcher, and the RPG crew found more speed overnight to post the second quickest lap of qualifying to begin Sunday’s round of racing. Quicker by roughly six tenths of a second, Austin secured the outside row one starting position for the opening heat race. He would finish third, after losing one spot at the start of the eight-lap race. Heat #2 was another battle for position, with Versteeg losing the third position in the final laps. The second main event of the weekend began with Versteeg losing a position on the opening circuit, running fifth as the early stages of the race developed. Austin put himself into the fourth position quickly, and hounded the third place driver for the remainder of the feature race. With three laps remaining, the RPG driver made a bold pass attempt, securing the third position and held on to the checkered flag. Officials however deemed Versteeg jumped the start, penalizing him one position and removed the podium result away.

“Overall I’m happy with the results, however, I feel I should have ended up on the podium both days,” added Austin after the weekend in Dallas. “The track had more grip then I had ever seen, and still adjusting to drive the shifterkart put me behind at the beginning of the weekend. I learned a lot and my speed improved with every session. I’m looking forward to keep getting faster in the S5 class.”

Austin returns to action when the Rotax Can-Am ProKart Challenge resumes on May 30-June 1 as the series visits the McMinnville Kart Track in Oregon. The Superkarts! USA Pro Tour continues on August 1-3 at the SummerNationals, set for the Modesto Grand Prix in northern California. Visit www.austinversteeg.com for more information and to follow his path during the rest of the year.