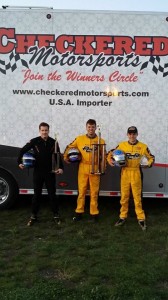 The PCR karts have been gaining rapid success throughout the 2014 season.  Checkered Motorsports is returning from the F-Series with 3 poles, 3 wins and 4 podium finishes.  The New Jersey Motorsports Park circuit held some great racing, where the PCR Karts showed speed in both their TaG and shifter packages.

In the Formula J class Nolan Ruocco and J.P. Southern Jr. utilized their rotax package.  Nolan Ruocco brought home a win for the team.  Southern Jr. was quick throughout the weekend, but a mishap in qualifying caused the young driver to only finish in fourth.

A new addition to the team, Chris Giumarra, swept the field in Formula 125.  The talented driver got accustomed to the PCR kart quickly where he took the pole position and the victory.

Andrew Bujdoso competing in the Formula 355 class put his PCR on the pole position.  The opening laps of the first heat had Andrew fall back to 17th after a turn one collision.  The 16 year old kept his head down and would climb back to the 10th spot.  The last two heat races Bujdoso gathered a pair of fourth place finishes.

Teammates Kyle Smith and Robert Bujdoso made their first start in the Stock Honda class for the 2014 season. In qualifying the PCR karts were on the front row, with Bujdoso on pole and Smith outside pole.  The pre-final displayed great race craft between the teammates where the lead was exchanged multiple times.  However, Bujdoso pulled off the win in both the pre-final and main event over Smith.

Checkered Motorsports owner Csaba Bujdoso states, “This weekend was another solid weekend for the team.  I can’t thank our drivers enough for putting the PCR Karts up front.  Special thanks to Marco to put up such a competitive, fun series.”