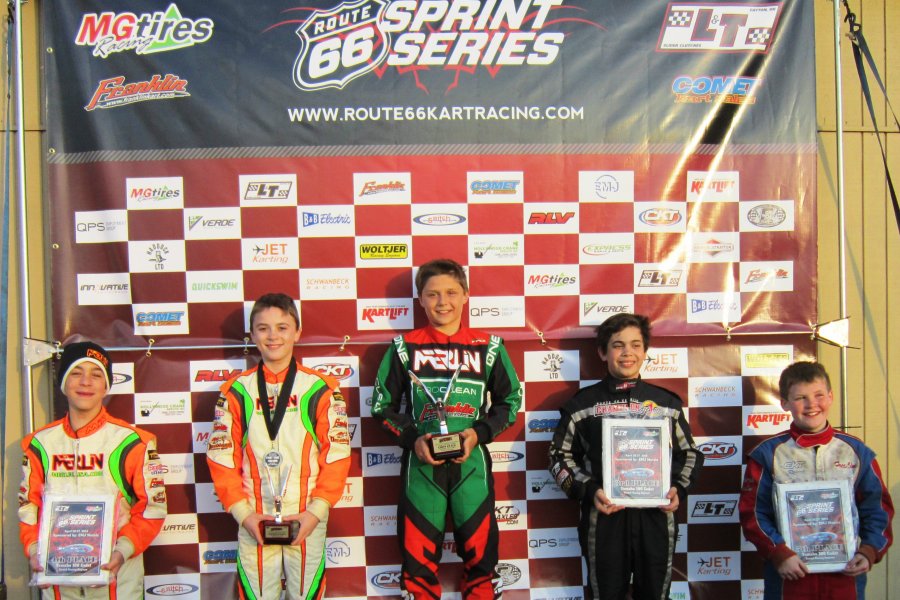 The MG Tire / L & T Manufacturing Route 66 Sprint Series held their season openerat Concept Haulers Motor Speedway (CHMS) on April 26-27 with a large turnout of 289 entries.  The event was sponsored by EMJ Metals. After a long cold winter in the Midwest, everyone was glad to be back racing with some nice weather.  Rain stayed away until the final two races on Sunday, cancelling the last race due to a heavy downpour. 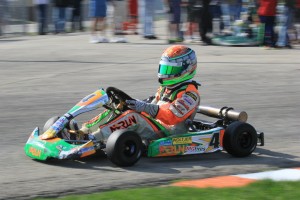 A whole bunch of prizes were given away by drawings at the Saturday morning driver’s meeting.  MG Tire sets were won by Jonathan Thompson and Nicholas Nuffer.  PKT Certificates were won by Darin Marcus, Delaney Keaveny and Talan Drake.  Skid Plates by KartLift were won by Preston Lemm and Keenan Hertzner.  Kartlift PitMats were awarded to all drivers who had pre-entered for the entire season. And two more sets of MG Tires were also given away in a drawing held for the full season pre-entry drivers.

The first final racing both days was the Haddock Limited/Comet Kart Sales Komet class.  Ryan Weyer set quick time in qualifying on both days and swept the day on Sunday winning both the pre-final and the final.  Weyer received fast time medals at the post race awards ceremony which is a new award the series is giving this year for qualifying.  Christian Besasie captured the pre-final and final on Saturday with Weyer finishing a close second.  Roman Padans, Emanual Richmond and Kyle Gluth rounded out the top five on Saturday.  On Sunday Delaney Keavany, Cooper Horn and Jeremy Roche finished in the top five.

The Hollywood Crane Service Kid Kart class was racing next where Jacob Ewing set fast qualifying time on both days.  Pierce Sonderup won both the pre-final and final races on Saturday edging out Dylan Julien by just .131 seconds.  On Sunday Nicolas Martens captured the pre-final but dropped out early in the final where Charlie Kremer took the win over Jacob Ewing.  Rounding out the top five on Saturday was Elliot Cox, Jacob Ewing and Charlie Kremer.  On Sunday Pierce Sonderup, Maxim Mabee and Cooper Christ finished in the top five. 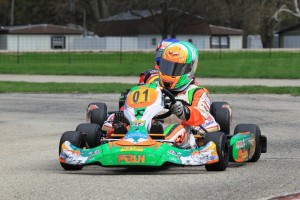 Next racing was the Haddock Limited/Express Karts & Parts Komet Cadet class. Alex Bertagnoli swept the class on both days qualifying on pole and winning both pre-finals and finals.  He was followed closely on both days by Austin Schaff who finished just .073 seconds back on Saturday.  Top-five finishers included Sam Mayer, James Lynch and Stephen Dial on Saturday and James Lynch, Matthew Northrop and Michael Paterno on Sunday.

The next class racing was the RLV Yamaha 100 Senior class with large fields of 26 and 24 entries.  Collin Griffin captured the fast qualifying awards on both days.  Pre-final winners were veterans Adam Crepin on Saturday and Darin Marcus on Sunday.  The young guns took the final wins with Killian Keavany edging Griffin by .042 seconds on the final lap on Saturday and Joshua Fierke, who started ninth in the final, taking the win over Robby McQuinn on Sunday.  Christian Ledesma, Kyle Gluth and Fierke rounded out the top five on Saturday and Keaveny, Brad Brittin and Marcus placed in the top five on Sunday.

A new class for this season, the CKT Leopard 125 Junior class was dominated by Brandon Lemke who set fast qualifying times on both days and swept the pre-finals and finals on both days.  Rounding out the top five on both days were Emily Hurlbert, Michael Rutter, Brandon Baela and Max Nufer.

The next class racing was the Triple E Sales Yamaha 100 Rookie class with 15 entries.  Mason Maine was the man to beat as he swept qualifying, pre-finals and both class final wins.  Camrin Cass followed in a close second place both days and Tate Steinman, Mason Santiago and Conner Churchill rounded out the top five on Saturday.  On Sunday, Churchill, Santiago and Steinman finished in the top five. 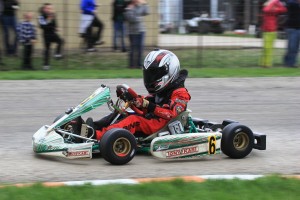 The Franklin Motorsports Leopard 125 Senior class staged next with 21 entries.  Darin Marcus qualified on pole Saturday and Elliot Finlayson took the pole position on Sunday.  Finlayson started 13th in the final on Saturday but was able to move to the front after a big pileup in turn two at the start. Finlayson held off pre-final winner Michael Gerringer by just .122 seconds at the finish.  Marcus, Tommy Anderson and Brandon Collins rounded out the top five on Saturday.  On Sunday Finlayson won the pre-final and was able to pull out to a three second win over Gerringer.  Darin Marcus, Brandon Collins and Colton Ramsey finished in the top five on Sunday.

The Yamaha 100 Junior class sponsored by Woltjer Racing Engines was up next with 17 entries.  Becker Reardon was fast qualifier both days and swept the day on Saturday winning both the pre-final and final over Mike McAndrews by .339 seconds.  Brandon Lemke, Dillon Schwanbeck and Thayne Chapin rounded out the top five on Saturday.  On Sunday Lemke would win both the pre-final and final pulling away from Ryan Weyer by 6 seconds at the finish.  Schwanbeck, Brant Carter and McAndrews finished in the top five.

The Switch Racing EnginesYamaha 100 Cadet class gridded next with a big field of 18 entries.  Alex Bertagnoli qualified on the pole Saturday and Michael Paterno set quick time in Sunday qualifying.  But it was Austin Schaff who would dominate the class winning both pre-finals and finals on Saturday and Sunday, edging Bertagnoli by just .241 seconds on Saturday.  Rounding out the top five on Saturday were Paterno, Stephen Dial and Matthew Northrop.  Sunday’s race was interrupted by rain and finished in the wet.  The top five finishing behind Schaff were Sam Mayer, Alex Bertagnoli, James Lynch and Michael Paterno 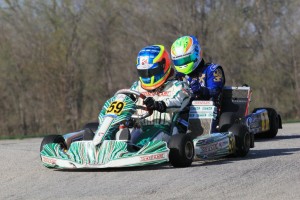 Merlin chassis captured the most wins over the weekend with nine followed by Tony Kart (5), Arrow (2) and Birel and Top Kart with one win each.

The next round of the Route 66 Sprint Series will be held at Michiana Raceway Park (MRP) near South Bend, IN on June 7-8.  On-line registration must be completed by May 31 to receive the pre-entry discount.  Visit www.MotorsportReg.com to register online.  Friday practice will be available at this event.  All entrants will have a chance to win a set of MG Tires in a drawing held at the Saturday morning driver’s meeting.  For more information about the Route 66 Sprint Series, visit www.Route66KartRacing.com.