Brueckner Fights to a Podium Finish at Superkarts! USA SpringNationals 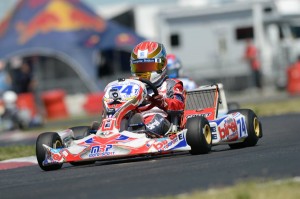 Nick Brueckner launched what is sure to be a successful 2014 Superkarts! USA Pro Tour campaign this past weekend (May 2-4) at the fifth annual SpringNationals. Held at the Dallas Karting Complex, located in Caddo Mills, Texas, Brueckner kicked off his rookie season in the TaG Junior division with an up-and-down weekend. Thanks to Brueckner’s tenacity and talent, he was able to bring back a top-five finish on Saturday, and make the trip to the podium Sunday. What made the impressive weekend for the Hockley, Texas driver was how he did it. Continually having to recover from opening lap incidents, or shortened races, Brueckner never lost control of the weekend, and put on a clinic in overtaking karts. In his first SKUSA Pro Tour race as a Junior level driver, the MRP Motorsport/Birel America driver proved to everyone that speed he possess and the ability to challenge for wins at any level.

Nick’s weekend began with him showing fantastic speed in the final practice sessions on Friday, in preparations for the race. Nick paced the TaG Junior field during the second to last practice session, and laid down the second fastest time during the final session of the day. Carrying his speed over from Friday, Brueckner hit the track for qualifying and laid down the fifth best time of the 10-minute session. Unfortunately, Brueckner’s hard work in qualifying would be upset by a lost chain after just three laps into the race. Nick used the full eight laps of Heat #2 recovering. Brueckner came from the final spot on the grid and passed 15 karts to record an eighth place finish. Saturday’s main event gave Nick yet another example to showcase his ability to pass karts as he was caught up in a wild opening corner that saw him drop to 18th. The red flag was shown for the first lap incident, causing the race to restart and ultimately be cut six laps short. Brueckner made the most of the single-file restart and was back in to the top-10 by lap three. When the checkers flew on Round One, Brueckner had clawed his way back to an impressive fifth place result in his TaG Junior Pro Tour debut.

Sunday was an even better day for Brueckner, even though the second day of racing did not start out as well as hoped. Qualifying was a challenge as Nick was slower by two tenths from his previous qualifying time on Saturday, placing him on the 11th place starting spot for the first heat. The eight lap race was hotly contested, and Nick’s position on track changed with every circuit. At the checkered, Brueckner was back to the 13th spot but was given a five-position penalty for rough driving. Nick had a fantastic start to the second heat race which vaulted him from 18th on the grid, to ninth on the first lap. From there, Brueckner gained two more positions to end up sixth. Comfortably inside the top-10 to start the last main event of the weekend, Nick finally did not have to recover from a wild start or a poor starting position, and was able to focus on racing for the lead. Brueckner looked superb in the 16-lap feature race, pacing with the best in the country. Nick ran as high as second in the race, and relinquished the runner-up spot toward the end to finish with a strong third place result.

Brueckner’s trip to the podium Sunday evening was a well earned and certainly hard-fought one. The young Texas driver has proven time and time again that he has the pace, and the race craft to compete for wins at any level, and in any class he enters. Brueckner is going to be a threat for TaG Junior wins for the remainder of the season.

About Nicholas Brueckner:
Racing out of Hockley, Texas, Nicholas Brueckner is a name you will be hearing more throughout the karting ranks in the coming years. At 12 years of age, Nick has spent less than four years in the sport, and has racked up impressive results and experience. From winning the Micro Max class at the 2012 U.S Rotax Grand Nationals and Mini Max championship in the 2013 Florida Winter Tour, to racking up wins at home in the SKUSA Texas ProKart Challenge, Brueckner is climbing the ladder quickly. Nick’s talents are far from being limited to just behind the wheel, however, as he is excelling academically, earning straight-As along with showing great leadership and people skills. Supporting Nick in his racing endeavors is the MRP Motorsport/Birel America team, Jose Castro/CMW Engines, Oakley Sunglasses, Savage Design, Rosehill Christian School, and Trackside Tutoring.