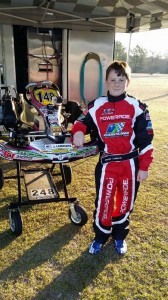 Joseph Lamberth has shown a continuation of his success in 2013 early this season in 2014.Coming away from an all-around victory in round one, he radiated confidence for the next two rounds of the Carolina Motorsports Park (CMP) club series.

Round two of CMP’s series nearly gave Lamberth the results he ultimately desired. Qualifying on pole and backing it up with running in first to the prefinal finish, Joseph was well placed to succeed in the main event. When the green flag flew, Lamberth finally saw some competition around the first turn. Winning the initial battle, he held his first place position until the white flag. Being passed on the last lap and taking home second place certainly didn’t dampen Joseph’s spirit, however.

“I was very happy with how the kart was running,” expressed Lamberth. “But today just wasn’t meant to be.”

Race three brought a day of rain to CMP. However, Joseph woke up with a smile on his face, as he loves a good day of rain racing. After a less than perfect practice, Lamberth’s team got it together for an excellent kart, qualifying easily in first place. Pulling through into the prefinal, he continued his domination in the rain.

At the start of the final, Lamberth pushed through to the front and slowly crept away from the field. Finishing with a 23.760 second lead ahead of second place, he once again took the lead in the CMP series points.

With two great weekends under his belt, Joseph Lamberth looks forward to the rest of 2014 with great expectations. Joseph is not only a great driver but regularly makes honor roll at school, is on the school’s Varsity soccer team, and attends Southview Baptist Church.

Lamberth would like to thank TK Wrap Designs, Powerade and K1 RaceGear through Carolina Motorsports Park as well as his friends, family, school, teachers and the Southview Baptist Church in Statesville, North Carolina for their endless support.