Impressive Start for Hamilton in the United States 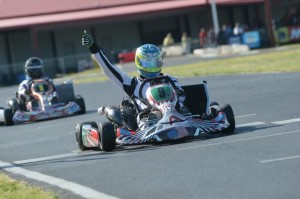 Christchurch driver Matthew Hamilton acknowledging the chequered flag and on the top step of the podium in Texas on Saturday (Photo: Fast Company/Todd McCall)

Kiwi karter Matthew Hamilton has enjoyed an impressive start to his SKUSA Pro Tour campaign in the United States over the weekend, claiming a first-up class win on Saturday and looking set to repeat the performance on Sunday until a loose reed block put him out of that day’s Final.

The 31-year-old multi-time New Zealand champion, and S4 Masters Stock Moto class winner at last year’s SKUSA series grand final in Las Vegas, has been invited back to contest the full 2014 season by the northern California-based Aluminos team. And his performance in the scorching heat at the Dallas Karting Complex over the weekend augurs very well for the other two double-header rounds later in the year.

Though he had little time to acclimatize to the track, temperatures and kart/engine combination Hamilton set the third quickest qualifying time for Saturday’s first series round before finishing fourth in the first heat then winning the second and the winner-takes-all Final, the latter from defending champion Jordan Musser and fellow Texan Chris Jennings.

Musser pipped Hamilton for pole for the second round of the series on Sunday, but the Kiwi won both heats and looked odds-on favourite to claim his second Final win in as many days until the reed block on his kart’s engine worked loose and he managed just the one lap before stopping.

With Hamilton out the battle for the lead was between Musser and Darren Elliott with Elliott prevailing.

The next double-header round of this year’s SKUSA Pro Tour is the SummerNats meeting at Modesto, California between August 01-03 with Las Vegas again hosting the final two at the annual SuperNationals meeting between November 19 & 23.