The 2014 edition of the Superkarts! USA is primed for another record breaking event to begin the fifth season. The SKUSA SpringNationals will take place at the Dallas Karting Complex in Caddo Mills, Texas on May 2-4, with 237 entries already scheduled to take part this historic event, 10 more than last year’s number from Tucson, Arizona. The circuit hosting the opening two rounds of the Pro Tour is a newer 8/10-mile circuit, hosting its first major national event and bringing a number of drivers from across North America and around the world to the Lone Star State.

EKN, the official media partner of Superkarts! USA, is providing a three-day preview program leading up to the SKUSA Pro Tour SpringNationals highlighting each of the eight classes. Tuesday was a preview of the TaG Junior, S5 Junior, and TaG Cadet divisions with Wednesday a look at S2 Semi-Pro, S4 Stock Moto and TaG Master. Today is the headline categories – S1 Pro Stock Moto and TaG Senior.

Pure Karting S1 Pro Stock Moto
The creation of the Superkarts! USA began with the thought of bringing back a premier shifterkart category, based off the Stock Moto ladder system. The S1 Pro division began with a solid group of drivers, featuring some of the current stars of the sport in 2010. Thanks to the growth of the SKUSA program and the need for speed, drivers have begin flocking over to the six-speed sensation, many coming all the way from the S5 Junior beginnings and through the S2 Semi-Pro to the elite level that is S1. At 25 drivers, this will be the largest non-SuperNationals field at a Pro Tour event for the S1 category. 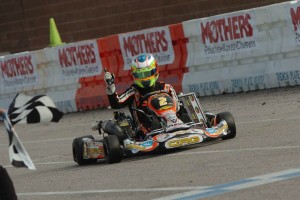 2013 was an outstanding year for Oregon driver Joey Wimsett. The CRG-USA pilot overcame a tough SummerNationals outing, caused in part to an illness, to bounce back at the SuperNationals in Las Vegas. His winning performance outside the Rio locked up his first SKUSA Pro Tour championship. The week prior, Wimsett was a member of Team USA at the 2013 Rotax Grand Finals, driving to the first runner-up finish at the event for an America driver. He along with two-time champion Fritz Leesmann will be the only two title winners present, with the absence of Kiwi driver Daniel Bray. Leesmann has assumed the 2011 champions role as the lead driver under the Aluminos tent. Bray brought the Aluminos chassis its first SummerNationals victory in Colorado last year, and now the 2010 and 2012 title winner is out to add another prestigious title to the growing brand.

Much of the hype surrounding the S1 division this SpringNationals is the inclusion of more international drivers. Four established drivers from Europe have traveled across the big Atlantic pond to compete in their first S1 events. Five-time world karting champion Davide Foré is joining the CRG-USA operation. The Italian has competed number of times in America, including Stars of Karting and the SuperNationals. Two are set under the PSL Karting establishment. CRG factory driver Jordan Lennox-Lamb has spent many weekends in the United States over the last few months, including Rotax events in New Orleans, and the Florida Winter Tour. Lennox was the quickest driver last weekend at the Texas ProKart Challenge. Dutch driver Milan Dontje will join him, already a podium finisher at the 2012 SuperNationals in S2.

This SpringNationals marks the return of Jake French. One of the first graduates up the SKUSA ladder system, up from the early S5 days, the Texan is partnering up with Champion Racing/Intrepid once again. The combo was potent at the Lone Star Grand Prix in March, and French has many laps around the DKC facility. Aside from Wimsett, the quickest driver at the SuperNationals this past November was Nick Neri. The decorated Rotax driver has little time in the Stock Moto national spotlight, but the results are powerful. A win in S2 at the 2011 SuperNationals was followed up with a runner-up to Wimsett last year – recording the fast lap of the race. The Ocala Gran Prix/Tony Kart driver will be a threat in Texas.

Seven drivers make up the 2014 S1 rookie class, all carrying a strong resume. Two 2013 champions move into the category – Andrew Zimmer and Christian Schureman. Zimmer (ART GP America) was the TaG Senior title winner, and has elected to try his hand at the S1 division. A former shifterkart driver, six-speeds are no stranger to the Oregon driver. Colorado’s Schureman triumphed in the S2 standings, banking off a runner-up finish at the SuperNats. He recently moved to PSL Karting, and was the named the race winner at last weekend’s Texas PKC event on Saturday.

The driver to beat Schureman in Vegas last year is Texan Connor Wagner. The Phil Giebler Racing/FA Kart pilot earned the milestone victory and was the California PKC S2 title winner. Wagner is among the drivers with the most laps at the DKC facility, and is sure to be in the hunt. Ryan Kinnear and Garrett Boone are also familiar with the SpringNationals circuit, having finished first and second in the Texas PKC S2 standings last year. Kinnear won the Sunday feature last weekend, and is back with Leading Edge Motorsports/Intrepid. Boone was the vice-champion in the Pro Tour standings, and the 3G Kart Racing/Birel pilot is primed for a stellar rookie campaign.

Oliver Askew and Augie Lerch complete the rookie roster. Askew will make his first ever S1 start, pacing his Ocala Gran Prix/Tony Kart entry at the front of the S2 field in Vegas last year. Lerch (Pure Karting/Tony Kart) won at the SpringNationals last year in S2, finishing on the podium at the SummerNationals and SuperNationals as well. At 25 drivers, all with impressive stats and history, there is no telling what will happen when the karts hit the track Saturday for Round One.

Leading Edge Motorsports TaG Senior
The fifth season of the Superkarts! USA Pro Tour will welcome the largest field at the SpringNationals for the TaG Senior division. Forty drivers will begin the championship chase in Dallas, all gunning to be the fifth different TaG Senior champion. From the west coast, to the east coast, and featuring three different countries, the roster is stacked with talent ranging from the most experienced to the young and hungry. 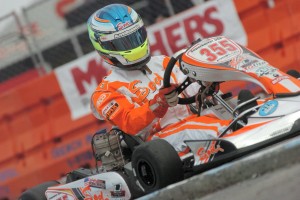 Louie Pagano is among the many TaG Senior contenders stepping into the Pro Tour opener (Photo: On Track Promotions – otp.ca)

Defending Pro Tour champion Andrew Zimmer elected to jump over to the S1 Pro division in 2014, thus leaving the door open for anyone to take the crown this season. Louie Pagano seems to have been at the doorway, just unable to break through with a victory or a title since moving up to the Senior ranks in 2011. The California driver moved over to the Dallas Karting Complex/SodiKart USA squad last summer after opening up the year aboard the familiar Birel. Finishing second in the Pro Tour standings last year along with the Rotax Challenge of the Americas program this winter puts the 2013 EKN Driver Rankings #1 driver among the favorites this weekend.

Fellow California drivers Jake Craig and Matt Johnson continue to be treats with each TaG Senior outing. Craig was the 2013 California PKC champion and Rotax Can-Am ProKart Challenge title winner but could not transfer that success to the Pro Tour level. Now with a stable home at 2Wild Karting, the Tony Kart driver is poised for a run at the TaG Senior title. Johnson is also a former regional champion and former top-three finisher in the Pro Tour standings. The veteran, racing under his own Smokin’ Fast Motorsports team, is one to never give up and is sure to be toward the top of the leaderboard.

Austin Elliott is another west coast driver, looking for Pro Tour glory. The NorCal pilot has finished the last two years in the top-seven of the standings, and just announced a move to the Rolison Performance Group and the Kosmic chassis after a longterm run with Top Kart. RPG has helped drivers win four Rotax Challenge of the Americas titles in two years, along with a TaG Junior Pro Tour title in 2011. This new partnership could be the combination to propel Elliott higher in the standings and possible give RPG its first Pro Tour TaG Senior title.

The east coast will be well represented in Texas, as the closest Pro Tour event since the 2010 SummerNationals in Wisconsin. Among them are KartSport North America/FA Kart drivers Roger Ralston Jr. and Derek Dignan. Ralston bagged a double win weekend at the USPKS opener at GoPro Motorplex, taking home a nice $2,500 pay day. Confidence is high for the Florida driver who will make his Pro Tour debut. Dignan was a rookie last year, and has made stellar progress working with KSNA and veteran racer Gary Lawson to be a contender.

Another driver that is on the climb is Florida driver Dustin Stross. The privateer is out on his own, pitting out of his trailer and easy-up, shunning the idea of needing to be with a big team to be fast. The 16-year old has the speed to contend, but must avoid any errors to be in the hunt in Texas. Franklin Motorsports/Merlin driver Kyle Kalish continues to earn the respect of the paddock entering his second year in the Senior ranks. The 2013 USPKS champion was fast at his SuperNationals debut in November, and is sure to climb the sheets throughout the weekend in Texas.

This weekend brings a few familiar faces back to the paddock and to the driver’s seat. Former SuperNationals winner David Jurca is back behind the wheel of an Italian Motors USA/Italkart entry. The former top ICC and ICA driver continues to stay sharp at the Sumas International Motorsports Academy facility along the US/Canada border in Washington, but still may need to shake off the rust when arriving at DKC. Texas is home of former SKUSA ProMoto Tour standout Kyle Martin, and this weekend marks his return to Superkarts! USA action. Teaming up with Greg Bell and the Leading Edge Motorsports program, Martin will contest his first TaG Senior event aboard a Praga chassis, showing speed at last weekend’s Texas ProKart Challenge event.

Five Senior rookies are set to make their debut this weekend in Texas, including last year’s TaG Junior champion Yurik Carvalho. The Italian Motors USA/Italkart driver scored the victory at the SuperNationals to jump up the standings and claim the top spot. The young Brazilian will now make the step up to the Senior level. Gresham Wagner (KartSport North America/Arrow), Austin Osborne (Iron Rock Motorsports/Tony Kart), Kale Kunicki (Team VemmeKart/Extreme Karting), and Brendan Baker (ART GP America) will join him as the SKUSA Pro Tour rookie class of 2014.