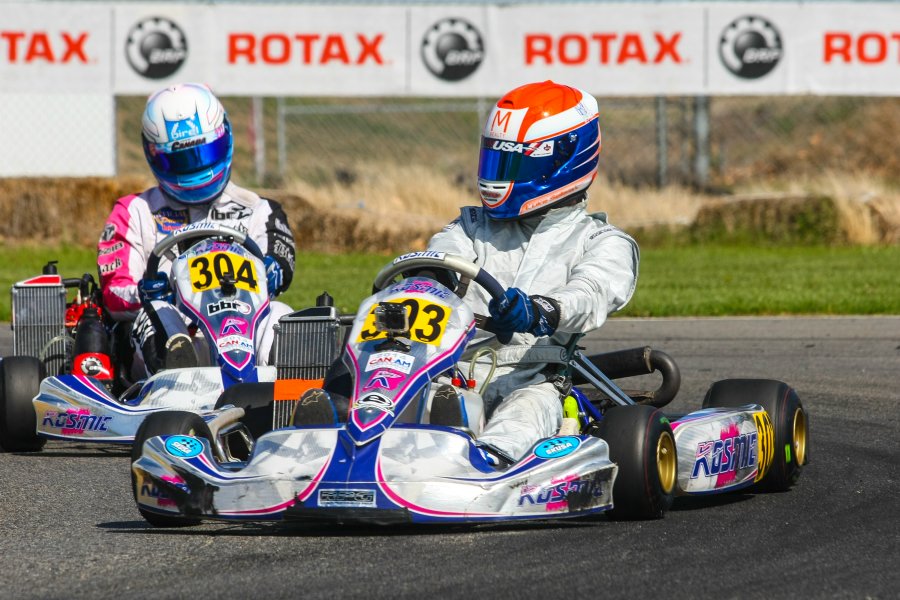 The 2014 Rotax Can-Am ProKart Challenge kicked off the 2014 season at the Horn Rapids Kart Track in Richland, Washington over the weekend (April 25-27). The home of the Tri-City Kart Club served as the opening rounds of the sophomore series, with a solid number of United States Rotax Max Challenge and Superkarts! USA racers taking part. A handful of drivers carried some heavy brooms during the weekend, performing a number of class sweeps to open up the championship chases, including the four categories in which tickets to the 2014 Rotax Grand Finals in Spain are up for grabs. Senior rookie Luke Selliken doubled up in his debut, with Austin Versteeg, John Buzza and Derek Wang among those looking for a trip to Europe this November.

The Black Flag Racing Senior Max featured many of the same championship chasers from a year ago, including a rookie Senior driver by the name of Luke Selliken. The 2013 Can-Am Junior Max champion advanced to the Senior Max division at the start of the season, and opened up this year’s series with a double win weekend. Canadian Bryce Choquer was quickest in Round One qualifying, laying down a 39.241-second lap to edge out Selliken by 24 thousandths. The two drivers ran 1-2 in the 15-lap Prefinal, as Choquer led every circuit with Selliken on his bumper. Selliken made his bid for the top spot early, taking over the main event lead on the opening lap. He led for two circuits before Choquer reassumed the point. Selliken fought back two laps later, stealing the position away and holding it for the remainder of the 20-lap feature. At the line, Selliken held an eight tenths lead to secure his first Senior race victory. Former Team Canada driver Choquer finished second with 2010 US Rotax Grand Nationals champion Stepanova Nekeel third. Defending series champion Jake Craig was fourth with Hailey Groff earning an impressive top-five finish for her best finish at the series. 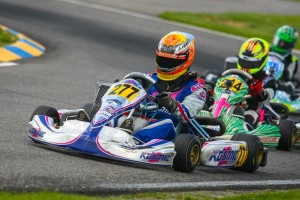 Choquer returned Sunday with the same speed he displayed the previous day with new Mojo tires. A tick quicker, his 39.212-second lap was best of the qualifying session with Selliken just five hundredths off the fast time. Contact between the top two qualifiers sent them to the tail of the field on the opening lap. That allowed Andrew Zimmer and Nekeel to move up to the front with Nekeel coming away with the race win. Selliken recovered to an impressive fifth after 15 laps while Choquer climbed up to eighth. It took Selliken all of three laps to make his way to the front of the field in the main event. From there, the Oregon driver pulled out to a 1.8-second advantage by the checkered flag for win number two. Craig drove to the runner-up spot with Nekeel once again on the third step of the podium. Zimmer and Choquer, who posted the fast lap of the race, completed the top-five.

The largest class of the weekend honor went to the Wicked Fabrication Junior Max field with 17 drivers taking part in the opening rounds of the Can-Am program. Sixteen of the drivers spent the on-track sessions chasing current Team USA member Austin Versteeg as he swept the two days for a perfect score to begin the championship chase. Coming off a title at the Rotax Challenge of the Americas program this winter, already earning a ticket to the Rotax Grand Finals, Versteeg drove with confidence all weekend. The perfect score nearly was over before it began as Kyle Wick came within eight thousandths of a second at the end of qualifying from stealing the fast time. Versteeg and Wick ran nose to tail in the Prefinal, finishing that way. The start of the main event saw Versteeg shuffled back to fourth on the opening circuit behind Wick, Junior rookie Sting Ray Robb and David Rafailov. By lap seven, Versteeg was back at the point and drove off to a three tenths margin of victory ahead of 2013 Can-Am Mini Max champion Robb. Wick completed the podium with Junior rookie Trenton Sparks and series newcomer Spencer Kunz. 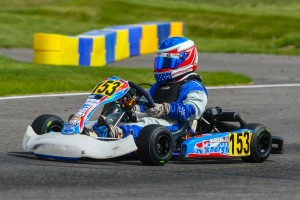 Qualifying on Sunday was a mere duplicate, as Versteeg and Wick were the quickest drivers once again. This time, the gap was just 77 thousandths with Wick nearly taking away the top honors at the end of the session. Wick got the jump on Versteeg to begin the Prefinal, and led for the majority of the 15-lap race. With two laps remaining, Versteeg made his move and took over the top spot for the win. Robb slipped through for second, dropping Wick down to third. The feature race was static at the front, as Versteeg drove to the victory by 1.2 seconds over Wick with Robb in third. Sparks was fourth in the final order with Canadian Ryan Martin placing fifth in his first weekend start in the series. Versteeg had two more wins on the weekend, scoring the S5 Junior Stock Moto feature victories over Sara Brinkac.

The Monster X Tour Mini Max division welcomed nine drivers taking part on the weekend, with Edward Portz and Jacob Blue Hudson splitting the feature wins. Hudson, who finished fourth in last year’s standings, opened up the weekend with top honors in Saturday qualifying. A lap time of 42.365 seconds put him at the top by two tenths of a second. JBH led all 12 lap of the Prefinal and followed it up with pacing the field all 15 circuits of the Final to cross the line first. Hudson’s performance was stripe away following technical inspection as he was given a disqualification. The penalty promoted Portz to the top step of the podium, as he edged Arizona driver Austin Torgerson to the checkered flag. Canadian Marco Kacic completed the podium with Conner Wick fourth and Enrique Jaime fifth. Hudson came back the following day for redemption, sweeping the on-track sessions. He once again out-qualified the field by two tenths of a second, and led all 12 laps of the heat race. Jacob dominated the main event, pulling out to a seven-second advantage for his first series victory. Portz beat Wick to the stripe for second with Jaime and Carsen Kunz completing the top-five. 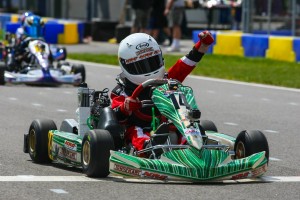 Josh Pierson emerged from the Micro Max category with the point lead thanks to two feature wins (Photo: SeanBuur.com)

Josh Pierson was the driver to beat all weekend in the GoKart Hero Micro Max category, sitting at the top of the time sheets both days. Pierson edged out defending series champion Max Wright for the top honors in Round One qualifying by five hundredths of a second. He led all 12 laps of the Prefinal but was pressured during the first half of the main event. Wright took over the lead a couple times before Pierson locked up the position and victory. Wright slipped back to third, with Jonathan Portz scoring the runner-up position, but earned the five bonus points for fast lap of the race. Pierson and Wright were 1-2 in Sunday’s timed session, with the 44.772-second lap by Josh recording the best time. Wright got the jump at the wave of the green flag to begin the heat race, as Pierson settled into second. He resumed his role at the point on lap eight, going on to earn the race win. Pierson locked up the top spot early in the Final, pulling away quickly and stretching out to a six-second advantage after 15 laps for victory number two. Portz earned the second spot once again with Wright in the third position.

John Buzza ran uncontested in the DD2, as did Chad Wallace in the Rolison Performance Group Masters Max class. Defending DD2 Masters champion Derek Wang outran Ben Johnston both days to secure the early point lead toward one of the four 2014 Rotax Grand Finals tickets to be presented at the series finale. 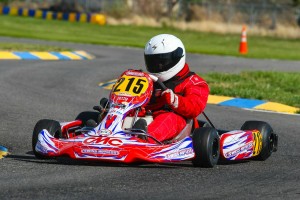 Johnston did walk away with two race wins on the weekend, placing first in the S4 Master Stock Moto division both days. A preview of what is expected to be another great championship chase, Johnston was the top qualifier to begin Round One of the weekend. Trouble in the Prefinal took him out of the race and gave defending champion David Whitelaw the race win. Johnston recovered in the Final to take the victory by nine seconds with Whitelaw second and Chad Wallace third. It was a clean sweep on Sunday for Johnston as he lead all on-track session, including an eight-second margin of victory in the main event. Whitelaw was runner-up with Tyler Shepard up to third.

Kory Estell was another double winner on the weekend, besting the growing S2 Semi-Pro Stock Moto class. Estell swept the opening round action, edging out class rookie Marco Eakins for the win with Justin Walsh third. On Sunday, Estell was the driver out front all day, earning the feature win over Walsh as they were the only two drivers to finish the 20-lap event. The Superkarts! USA categories begin their championship chases at the next event, scheduled for the McMinnville Kart Track.

New to the Can-Am series is the introduction of the LO206 categories, utilizing the spec Briggs & Stratton engine. In the RLV LO206 Junior category, Jacob Gulick won both days. Kellen Ritter ran second on Saturday, with Spencer Kunz joining the class Sunday to place runner-up behind Gulick. The MVP Motorsports LO206 Masters class was paced by Bryan Green. He won all on-track sessions with Eric Hubele second.

Stop number two of the series is scheduled for May 30-June 1 at the McMinnville Kart Track in McMinnville, Oregon. Visit rotaxcanamprokartchallenge.com and be sure to follow the series on Facebook as the 2014 Rotax Can-Am ProKart Challenge gets underway.