Leading Edge Motorsports is preparing to kick off another successful Superkarts! USA Pro Tour season with the fifth annual SKUSA SpringNationals quickly approaching. Greg Bell leads the Lodi, California operation into the LoneStarState for the next two weekends as they prepare to challenge for a number of race wins and championship chases when the LEM hauler arrives at the Dallas Karting Complex in Caddo Mills. A total of eight drivers spread out across five classes will compete at the May 2-4 event, with a good number of them taking part in the tune-up race this past weekend during the opening stop of the Texas ProKart Challenge.

“This lineup is possible one of the best we have had in the last few years,” stated Greg Bell of Leading Edge Motorsports. “The work put in by the drivers and our crew over the last few months has us feeling confident in the product we will put on the track in Dallas. We have worked hard with our partnership with SwedeTech Stock Moto engines and the national championship winning in-house TaG packages over the winter to give our drivers the edge they need to place up front.” 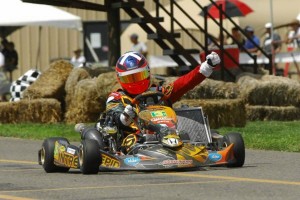 Kinnear will join the elite ranks of Superkarts! USA S1 Pro division this season after a successful 2013 that saw the Texan win the S2 championship at his home Texas ProKart Challenge. He also showed very well on the national stage last season, as he finished on the podium both days at the 2013 SpringNationals in Tucson, Arizona, followed up by a victory at the SummerNationals in Colorado. Kinnear will be the sole LEM pilot in the S1 class, piloting a new 2014 Intrepid chassis, and looking to capitalize with the first stop of the Pro Tour taking place in his home state around a very familiar facility. 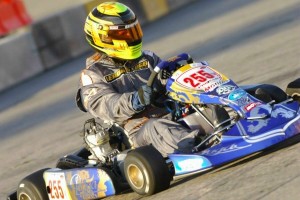 Jess Peterson is looking to build on a podium finish at the SuperNationals to close out the 2013 season (Photo: On Track Promotions – otp.ca)

Superkarts! USA’s second premiere class is TaG Senior, with LEM drivers Jess Peterson and Kyle Martin set to do battle. Peterson is coming off of a very strong 2013 Pro Tour after finishing 10th in the point standings, highlighted by a fourth place performance at the SuperNationals in Las Vegas. The veteran is ready to contend for the series championship, proven the LEM Praga chassis is among the best packages in the paddock. Along with Peterson will be the return of Kyle Martin to the national karting stage. The 2000 Shifter Kart Illustrated Driver of the Year and 2001 SKUSA World Finals winner has been away from the sport for a number of years, and set for a return aboard a LEM Praga package.

LEM drivers Jack Freese and Brandon Frank will be chasing for S2 Semi-Pro Stock Moto victories in Dallas. Freese has been apart of the Leading Edge Motorsports roster for quite some time now, and the hard work is beginning to yield worthy results. Most recently Freese was found standing on the podium collecting hardware after driving through a rain-soaked Lone Star Grand Prix, where he posted an impressive third place finish against current S1 and S2 drivers. Frank returns to the sport after a few years away. He has experience racing at the national level and will be teaming up with the LEM organization for the first time at the SpringNats.

McAllister is a veteran of the karting world who has experience in the business of winning. A longtime driver for Greg Bell, when McAlister is teamed up with LEM the duo is tough to beat. ‘T-Mac’ will be returning to his home state of Texas from California for the second time this year, after already visiting back in March where he finished third in the Lone Star Grand Prix. Joining LEM’s S4 driver roster will be Richard Heistand. The pair of LEM drivers is sure to yield results, as both drivers will be able to consult and improve as the weekend goes on. 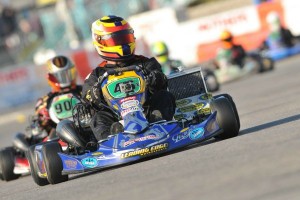 LEM driver Trevor McAlister is set to challenge for the S4 wins back in his home state (Photo: On Track Promotions – otp.ca)

Hunter Kelly is jumping up the SKUSA ladder system, with the 2012 Pro Tour TaG Cadet champion joining the LEM squad to contest his rookie TaG Junior campaign. The decorated Cadet racer has proven from his accomplishments that he is well suited for the challenge. Teaming up with LEM for the first time is sure to produce the speed that Kelly needs to replicate his TaG Cadet success in TaG Junior this year.

To learn how you can be a part of the growing operation that is Leading Edge Motorsports and working with veteran Greg Bell, contact Bell directly at 209.369.0921 or e-mail leadingedgeguy@sbcglobal.net and be sure to visit www.leadingedgemotorsports.com