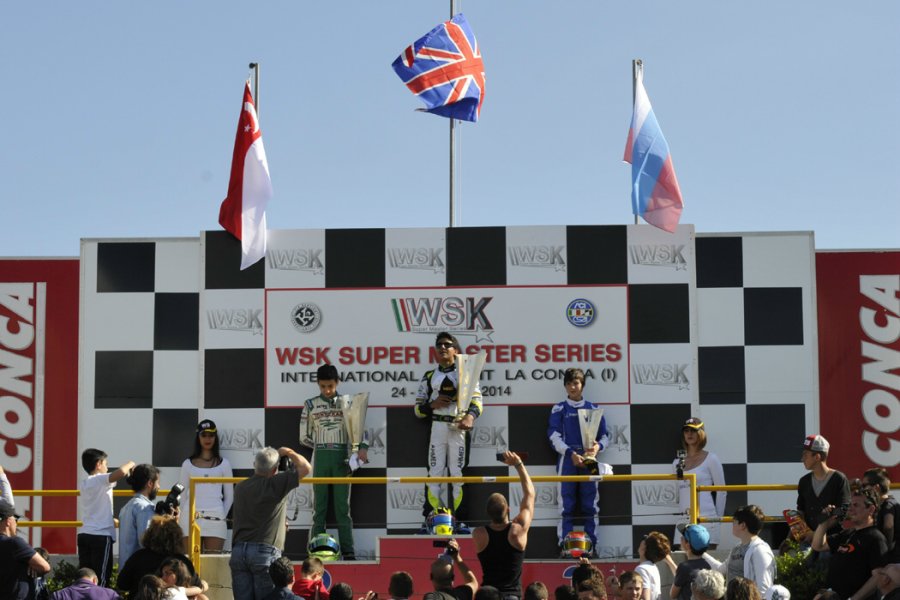 From the track to the podium the step is not short: fulfill or not fulfill a prediction, especially in kart racing, is a matter of inches and the Finals are usually full of surprises. The race which has just finished today in Muro Leccese (Lecce – Italy), on the International Circuit La Conca, confirmed the unpredictability of the WSK Super Master Series. The South Italian circuit hosted the third and final round of the Series; today’s appointment finished with the prize-giving ceremony of the winners of the four categories admitted to the Series. All the 200 drivers arrived at the south Italian facility enjoyed this thrilling weekend as well as the public on the stand or connected to the official website wsk.it to watch the live streaming of the race. A delayed broadcast of the final phase is on schedule on 30th April at 03:30pm on Rai Sport 2. The WSK TV Magazine will recap the whole weekend of Muro Leccese on Friday 2nd May, always on Rai Sport 2 at 11:00pm. 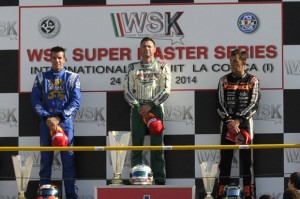 Ardigò wins the round and the Series in KZ2
Marco Ardigò (Tony Kart-Vortex-Bridgestone) wins again. After his success in Castelletto di Branduzzo, two weeks ago, he achieved success also in Muro Leccese securing his victory of the Series in the KZ2 category. The Italian driver followed a good strategy: he let Jonathan Thonon (Praga-Parilla-Bridgestone) dominate the heats and the Prefinal, but in the Final Ardigò showed that he was the driver to beat. He overtook Thonon at the start and kept the leadership until the end of a race he won hands down. The Belgian driver, who had been the fastest driver up to that moment, could do nothing but trying to keep the pace of the leader, hoping he might make a mistake: a mistake Ardigò didn’t make.  Another top driver from the Italian town of Brescia, Davide Forè (CRG-TM-Bridgestone), placed third after recovering from the third row.

Double success for Ilott in KF
Callum Ilott (Zanardi-Parrilla-Dunlop) achieved a great recovery this weekend. After the pole position grabbed in qualifying, he had to wait until the Prefinal B to win again. From that moment onward, he didn’t stop winning and conquered the Final too. He led the race from the first to the last lap. This double success allowed the Brit to lay his hands on the Series. Also the Italian driver Felice Tiene (CRG-TM-Dunlop), who started from the fourth row, had to recover in the Final to score a podium position. He was the runner-up thanks to a great series of overtaking manoeuvres. Niko Kari (Tony Kart-Vortex-Dunlop) was the last driver passed by the Italian. Kari finished third. 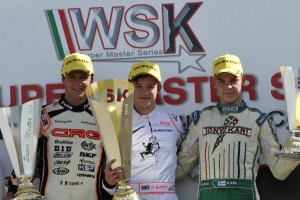 Ahmed’s thriumph in KF Junior
The English Enaam Ahmed (FA Kart-Vortex-Vega) managed to climb the standing of the KFJ and to win the Series. To accomplish his mission he had to win twice, both in the Prefinal and in the Final. To secure his victory, the Londoner kept at bay his rivals, especially the driver from Singapore James Pull (Tony Kart-Vortex-Vega), who was the runner-up of the Final with a rather remarkable gap. Good result also for the Russian Alexander Vartanyan (Tony Kart-Vortex-Vega): he placed third after a start from the third row.

Abrusci on top in the 60 Mini
Nicola Abrusci (Tony Kart-LKE-Vega) won the Final  of the 60 Mini, dominating from the first to the last lap. This success allowed the Italian driver from Bari to win the Series. Bad luck for the Russian Dmitrii Bogdanov (Tony Kart-LKE-Vega): he started from the pole position thanks to his victory in the Pre-final A, but he was slowed down at the start and dropped back. Behind Abrusci, five drivers battled until the end: it was only when there were three laps remaining that the Italian Giuseppe Fusco (Lenzo Kart-LKE-Vega) and the Malaysian Muizz Abdul Gafar (Hero-LKE-Vega) managed to conquer the second and third position. Positions which they kept until the end of the race.