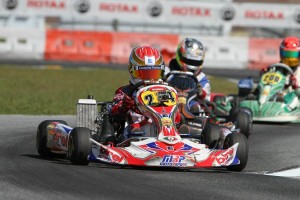 The next two weekends mark the opening to Nick Brueckner’s 2014 Superkarts! USA season, as the young Texan will contest the upcoming the Texas ProKart Challenge event followed up by the first stop of the SKUSA Pro Tour. The Dallas Karting Complex in Caddo Mills, Texas will host both opening weekends, with the Texas PKC scheduled for April 25-27 and the 2014 SKUSA SpringNationals set for May 2-4. The Junior karting rookie is primed to improve on the results garnered this busy winter, racing in Florida and along the west coast, focused on consistent finishes at the top half of the order aboard his MRP Motorsport/Birel America entry.

“It’s going to be a fun and exciting two weekends in Dallas,” commented Brueckner. “I really like the track, and there are plenty of places to pass. The drivers at both weekends will be tough, but if I do my best, I know I can stand on the podium each time.”

The opening weekend for the third season of Texas ProKart Challenge will be among the largest events in the series history, thanks to many of the SKUSA Pro Tour competitors utilizing the weekend as a tune-up. Brueckner is set to complete in the Junior Max category as part of the Burger King Rotax Max Challenge series within the Texas PKC program. The series provides qualifying ‘punches’ toward the United States Rotax Max Challenge Grand Nationals, set for July 17-20 at the Miller Motorsports Park in Tooele, Utah.

Nick finished the 2013 season with a top-15 finish in the final TaG Cadet points and seventh in Mini Max after competing in a limited schedule. Brueckner garnered success at the DKC facility at last year’s Texas PKC event, earning the main event victory both days in TaG Cadet along with a victory in the Mini Max division. Moving up to the Junior level, the Birel driver is up to the challenge to try and repeat that success. The main focus will be to obtain the most points possible, as the eight-round championship chase is the long-term goal as the season moves on.

The following weekend is the opening rounds of the 2014 Superkarts! USA Pro Tour and the SKUSA SpringNationals with the TaG Junior division the focus of the weekend. Nick contested the TaG Cadet division last year, finishing out the season sixth in the point standings highlighted by a third place performance at the SuperNationals in Las Vegas. Brueckner has proved his ability to adapt quickly and in new classes, as he as already shown this year in the winter Rotax programs. TaG Junior is sure to be a challenge for Brueckner, but it will be far from a daunting task for the up and coming karter.

Following the back-to-back weekends for both the Texas ProKart Challenge and the Superkarts! USA Pro Tour, Brueckner is scheduled to contest the Rocky Mountain ProKart Challenge in Colorado, in addition to the Rotax Summer Shootout and the US Rotax Grand Nationals – both at Miller Motorsports Park.

About Nicholas Brueckner:
Racing out of Hockley, Texas, Nicholas Brueckner is a name you will be hearing more throughout the karting ranks in the coming years. At 12 years of age, Nick has spent less than four years in the sport, and has racked up impressive results and experience. From winning the Micro Max class at the 2012 U.S Rotax Grand Nationals and Mini Max championship in the 2013 Florida Winter Tour, to racking up wins at home in the SKUSA Texas ProKart Challenge, Brueckner is climbing the ladder quickly. Nick’s talents are far from being limited to just behind the wheel, however, as he is excelling academically, earning straight-As along with showing great leadership and people skills. Supporting Nick in his racing endeavors is the MRP Motorsport/Birel America team, Jose Castro/CMW Engines, Oakley Sunglasses, Savage Design, Rosehill Christian School, and Trackside Tutoring.