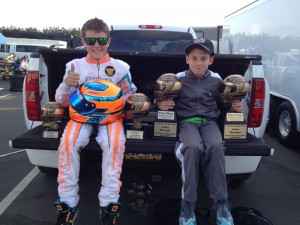 After a more than satisfactory winter karting season, Bordogna Engines drivers continued to show excellent results at the United States Pro Kart Series (USPKS) opener at the GoPro Motorplex in Mooresville, North Carolina. Young and talented drivers in the new Mini-Rok 60 Cadet division, such as Dylan Tavella and Kaylen Frederick are using Bordogna Engines power to their advantage, climbing to victories and podium finishes on both Saturday and Sunday.

Qualifying on the pole position and in fourth place on Saturday put Tavella and Frederick in position to work with the front-runners in the day’s two heat races.

Finishing in first place for both of the ten lap heats allowed Tavella to start in the lead in the main event and control it until the finish. On Sunday, Tavella qualified in fourth place for an outside second row start for the heats. Claiming victories in both of his heat races for the second day in a row, he swept in for the final and once again, dominated the class.

Frederick had an incident in one heat, placing him in the fifth place starting position for the day’s final. Using his speed to his advantage, Frederick picked up two spots in the final race and ended up with a third place podium result. Sunday’s qualifying was a down point for Frederick’s weekend, as the talent went late to the grid which resulted in running only two laps for the session get – enough for 13th position with cold tires. However, he quickly rebounded, picking up seven spots in the first heat for sixth place result and then ten spots in the second heat for a third place finish. Starting on the inside row three for the main event, Frederick advanced to the second position on lap one and held his position pushing the leader Tavella all the race until the checkered flag.

“We are very proud of all the people who were using our engines this weekend. I have to say thanks to the Tavella family, the Frederick family, Pilot One Competition, specifically Christian Boudon, Jeff Hudlett, and the mechanics Charlie and Luis Martinez, and obviously I need to thank the drivers, Dylan and Kaylen, who made this weekend amazing for Bordogna Engines,” expressed Daniel Bordogna. “These drivers proved that my engines are fast enough to run at the front of the field.”

Bordogna Engines is committed to being the best in engines. Hands on work at the track combined with technology such as the dyno and flow bench are utilized to find the edge needed to stand out in a competitive karting environment such as the one in the United States.

Combined with the wins from the winter karting season, Bordogna Engines aims to take this past weekend’s results and continue to build their successes throughout the year with many more top finishes.

Bordogna Racing Engines is located in Delray Beach, Florida. Bordogna offers an engine rental program, dyno testing, blue printing and maintenance of engines for all classes from Cadets to KZ1, as well as flowbench testing and CNC customized parts and accessories for engines. For those looking to get more power from racing engines to get to the front of the pack, contact Daniel by visiting his website atwww.bordogna.us, call (916) 256-0385 or email danielbordogna@hotmail.com.