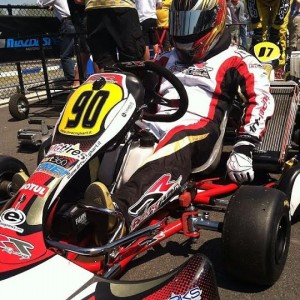 2013 marked the best year so far for PR Engines capturing some of the nation’s most prestigious national and regional championships in a number of TAG classes, including a 1-2 in the SKUSA Pro Tour in TAG Senior. Focusing on the development of the Parilla Leopard package in all of the TAG categories, PR Engines has moved its product to the east coast for the first time teaming up with some of the most talented drivers in the now second year United States Pro Kart Championship. As the premiere karting series on the east coast, PR Engines head engine builder Daniel Patino prepared Parilla Leopards for three drivers to do battle in both Leopard Pro and Parilla Challenge at the GoPro Motorplex in Mooresville, North Carolina, a track which requires top horsepower to be able to compete.

Teaming up with DRT Racing, Arie Ouimet and Brian Fisher would each utilize PR Engines power. Ouimet would qualify 13th out of the 39 kart field in Saturday’s Leopard Pro season opener, but quickly moved forward in the first heat up to 6th position. Having to start the second heat from the same position, Ouimet would once again battle to a 6th place finish running competitive time with the leaders. After two solid heat races, Ouimet would line up 5th for the final. Early on in the race, Ouimet would run as high as 4th before settling into 8th at the end of the race. On Sunday, a disappointing qualifying effort left Ouimet starting each heat in the 21st position. After a 17th in the first heat, Ouimet battled back to 7th for the second heat which is also where he would start the final. A fantastic opening lap would see Ouimet charge up to 2nd place before being dropped down the order to the tail of the top 10 a few laps later. The multi-time national champion would come across 11th resulting in two solid finishes to start the season off.

Brian Fisher would be competing in the Parilla Challenge category. One of the top S4 shifter pilots in the country, Fisher would trade in his Fisher Racing Engines Stock Honda for a PR Engines Parilla Leopard and showcase his natural talent by dominating the entire weekend. Fisher would lead the way in every official session but one over the course of the racing action. Qualifying on pole both days, Fisher won three out of the four heats while taking the main event victory both days capping off the weekend with an impressive near 8 second victory on Sunday. A perfect weekend would seal PR Engines first ever USPKS victories and Fisher has proven to be the driver to beat for the rest of the season.

T.J. Koyen would be making his season debut with ART Grand Prix America and would be near the front all day Friday leading into Saturday’s outside pole qualifying effort on his PR Engines Parilla Leopard. After a strong 3rd place finish in the first heat, Koyen was the recipient of a poor pass attempt and knocked off the track resulting in a 12th place result in the second heat. Starting behind Ouimet, Koyen would quickly move into 3rd place after the first few opening laps. Closing in the gap on the two leaders, Koyen was running the fastest laps of the race before a rib injury would cause T.J. to begin to lose performance. Struggling to maintain pace, Koyen would battle his way to a 3rd place finish and earn PR Engines their first podium in the Leopard Pro category. Unfortunately, the injury would be severe enough to force Koyen to sit out Sunday, but he will look to heal and be back in action at the SKUSA Pro Tour Springnationals in TAG Senior on a PR Engines prepared Parilla Leopard.

“I am very happy with our results from our first USPKS race,” explained lead technician Daniel Patino. “3 podiums out of 5 possible is very strong and to win two races is fantastic. T.J. had the pace to win and we hope he can recover quickly to battle for the win in Dallas.”

PR Engines is one of the premiere TAG engine builders in the United States winning championships and races utilizing the IAME Leopard, X-30, Vortex ROK TT, and Vortex MiniRok packages. Located in California, PR Engines offers a complete line of engine building services as well as some of the quickest engines in the country available for rental. To learn more about achieving a new Personal Record contact pr-engines@dpowerracing.com and visit www.pr-engines.com. Make sure to keep up with them as well on Facebook: PR Engines.