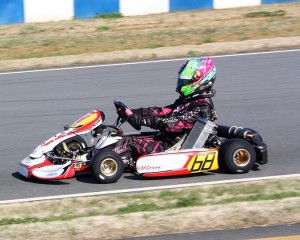 The United States Pro Kart Series quickly has turned from a new championship in 2013 to the premier karting series on the east coast and one of the strongest in the country for 2014. The first event of the season would be held at one of the top karting facilities in the country, the GoPro Motorplex in Mooresville, NC. The Leopard Pro category was the headline class and would see 39 entries and boast some of the best TAG racing talent in the country competing. T.J. Koyen, after being announced as an official ART Grand Prix America driver at last year’s SKUSA SuperNationals, would be making his much anticipated 2014 debut in the Leopard Pro division.

After a strong Friday test day that saw him amongst the top 5 competitors, confidence was high for a strong debut on the Saturday opener. Koyen, a 22 year old Wisconsin native, performed an excellent qualifying session to time in p2 and start from the outside pole for both of the heat races. The first heat would see Koyen battle up and down the top 5 before making a last lap pass to secure the 3rd position. Needing to find a bit of pace, T.J. and his father Tim made some minor adjustments and they definitely found the speed running the second fastest lap of the next heat. Unfortunately, the result didn’t showcase this as another competitor made a dive-bomb pass knocking Koyen off the track from the 4th position and dropping him all the way to 12th by the end of the heat. Taking the combined finishes of all the competitors, Koyen would start the 25 lap final from the 7th position. Knowing they had the pace to win, Koyen set out to move back through the field and worked his way up to 5th by the end of the first lap. Continuing to push, Koyen had worked his way into 3rd a few laps later and had his sights set on the leaders. Running the fastest laps of the race, T.J. ran down the front two and as he prepared to make his final moves, a rib injury that had started to flare up during the first heat began to take a major toll physically during the closing laps. Competing in heavy pain, Koyen was forced to slow his pace down and managed to complete the podium drive by eventually finishing in 3rd. It was a great result for both Koyen and the ART Grand Prix brand to show so well in their first outing by landing on the podium. Unfortunately, the pain was too much and T.J. was forced to skip the second day of action and hopes to be healed in time to compete in the SKUSA Pro Tour SpringNationals at the beginning of May in Dallas, Texas.