Enjoying success from season to season is nothing new for Team Aluminos. Though the 2014 season is young, Aluminos and its chassis brand is already putting up strong results to start the year. At the end of March, the northern California karting team contested the opening round of the Red Line Oil Karting Championship at the SimracewayPerformanceKartingCenter in Sonoma. Aluminos drivers put in a solid weekend of racing to kick off the growing regional series in strong fashion. Led by Stephan Gaudreau’s win in Rotax Masters, Team Aluminos recorded a podium finish in Micro Max along with a host of top-10 performances.

Gaudreau began his Round One victory at the RLOKC by qualifying third in the timed session, two tenths off of the pole position. Gaudreau worked his way up to second by the third lap after falling to fourth at the start of the first heat race, which is where he would finish the race. Gaudreau slipped at the start of heat two, dropping to the fifth position before regaining his lost ground to finish third. The Aluminos crew put together a solid game-plan and set-up for the main event on Gaudreau’s Aluminos chassis to contend for the win. Gaudreau drove consistent and fast laps, despite a dust up at the start that would drop him to fifth on the opening lap, working his way back up the leaderboard. By lap 10, Gaudreau had taken over the lead. Fending off challenges for the final five laps, Gaudreau drove to the first main event win of the season and established himself as a threat for this years championship.  Behind Gaudreau was Team Aluminos driver Billy Scott. The opening round went well for Scott as he fought to stay in the top-10 all day and finish in the 10th position in the main event. 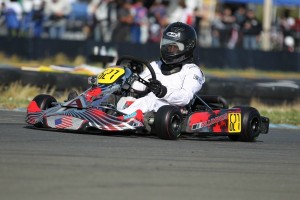 Grant Langon and Ethan Tavares competed in the Rotax Micro Max class for Team Aluminos. Langon was near the front all day and constantly in contention for the win. Starting with qualifying, Langon placed his Team Aluminos entry comfortably on the pole position by seven tenths of a second. Langon settled into a second place finish in the first Prefinal after leading the first half of the race, and followed it up by leading all eight laps to score the win. The main event started with Langon occupying the second spot, despite slipping to fourth early on. Langon raced hard and drove to an impressive runner-up finish to start the season. After qualifying fifth to start the day, Ethan secured a fourth place finish in the first Prefinal, but dropped back to eighth place in the second Prefinal. He would remain in that spot through the main event to start out the season.

In the highly competitive Pro Stock Honda class, Team Aluminos drivers Grayson Browne and Will Preston had solid opening race days. Preston began the round with great speed as he laid down the second fastest lap of the session, with Browne not far behind in seventh place. The first heat race went very well for Browne as he quickly advanced up in to the top-five, finishing in fourth place. Preston did not have as much luck in the first heat race as he received a disqualification after coming across the line in third place. The second Prefinal saw Browne record an eighth place finish while Preston, who started at the front finished in the third position. After 15 laps of hard racing, Browne started the season with a seventh place finish in the main event, while Preston’s season opener ended after only two laps leaving him to finish the main event in the 10th position. Daniel de la Calle contested his first Pro Stock Honda event aboard an Aluminos after placing vice champion in the Senior Rotax division. The NorCal driver was top-three throughout the day, placing in the runner-up position for his shifterkart debut aboard the Aluminos chassis. 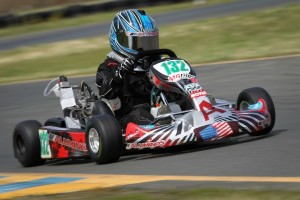 Milas Mills brought home another top-10 finish for Team Aluminos at the RLOKC season opener this past weekend. Competing in the Rotax Senior class, Mills qualified 12th to begin the day, but quickly climbed the leaderboard. After driving to an 11th place finish in the first heat race, Mills went on to crack the top-10 with a ninth place finish in the second Prefinal. After prepping his Aluminos entry for the main event, Mills went to work.  Coming from the back, Mills slowly moved his way up the running order. With five laps to go, Mills took over the eighth position and held the spot to the checkered flag. Also in Rotax Senior for the Aluminos team was Alex Kwan. Starting the day with an eighth place qualifying effort, Kwan went on to remain in that spot in the first heat race and an 11th place finish in the second Prefinal. The main event unfortunately saw Kwan slip one more position to finish the day in 12th.

Jason Pettit had a very impressive weekend in the very populated Rotax Junior field. A strong run in qualifying placed Pettit fifth on the grid. Pettit slipped at the start, nearly falling out of the top-10 but drove a great race and recovered nearly all of his lost ground in order to finish seventh. The second Prefinal Pettit continued to improve driving to a strong fourth place finish. In the main event, Pettit ended the day with a very solid eighth place result. Ryan Tate contested the Mini Max class for Team Aluminos on Sunday. After racing inside the top-15 the most of the day, Tate, with the help of his Aluminos teammates got his kart hooked up and drove to an impressive ninth place finish. 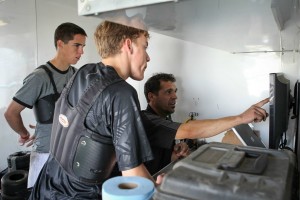 The following weekend was Team Aluminos return to the Rotax Challenge of the Americas program, field three drivers on April 4-6 at the Simraceway facility. Gaudereau was among the top contenders once again in the Masters Max division, nipping at the heels of the top-five and showing pace to race for podium finishes. Gaudreau ended up sixth during Saturday action, and returned even quicker the following day. A third place run in qualifying opened the door for a fantastic second place finish in Sunday’s Prefinal. Gaudreau was in the hunt for the win the entire main event, leading for seven laps in the closing circuits until crossing the line third in the order. The podium finish was removed however for a modified airbox, removing him from the results. That however did not take away the fact that Aluminos chassis was working well for Stephan.

Grant took on a competitive Micro Max field, and during Friday’s practice session took his first laps on a wet course. Working with Aluminos’ Fritz Leesmann, Grant made great progress throughout the weekend. Saturday began with promise, but ended with Langon involved in an opening lap incident to take him out of the race early. Sunday faired much better for Grant, beginning with a terrific run in qualifying, placing Langon second on the grid for the Prefinal. Grant was shuffled back at the start, and pushed off course which dropped him down to 11th at the end of the heat race. Langon bounced back and drove to an impressive third place finish to earn his first ever podium result in his series debut.

Pettit showed well in the fast Junior Max category, but ran into bad luck over the Challenge weekend. Saturday saw great improvement as Jason drove to a 25th place finish after coming from 32nd on the grid. After qualifying 21st Sunday morning, Jason quickly climbed into the top-20. After improving to 18th in the Prefinal, Pettit ended the Challenge weekend with a respectable 16th place finish Sunday afternoon. Showing speed – and more importantly improvements – Pettit will continue to develop as a driver with the help of Team Aluminos.

Aluminos is preparing for the upcoming Superkarts! USA Pro Tour SpringNationals, scheduled for the Dallas Karting Complex on May 2-4 in Caddo Mills, Texas. A full slate of drivers will contesting the season opener aboard the Aluminos chassis in Stock Moto and TaG categories. The Red Line Oil Karting Championship resumes the weekend before, April 26-27, for Round Two action, returning to the SimracewayPerformanceKartingCenter.

About Aluminos:
Started as a manufacturing and distribution company specializing in kart racing specific products, the Danville, CA based operation created its racing team toward the end of the 2007 season. Led by Rob Soares, Aluminos has put together the essential pieces to help groom drivers of any age to reach their personal goals. Driver coaches Tom Dyer and Fritz Leesmann – both successful karters – teamed with their in-house Stock Moto program led by engine guru George Tavares, the Aluminos Trackside Support and Arrive & Drive program is above any other outfit in the country. The team also produces its own chassis line, the Aluminos.  Find out more at www.aluminos.com and the new www.shopaluminos.com for new and used products on-sale from the respected operation.